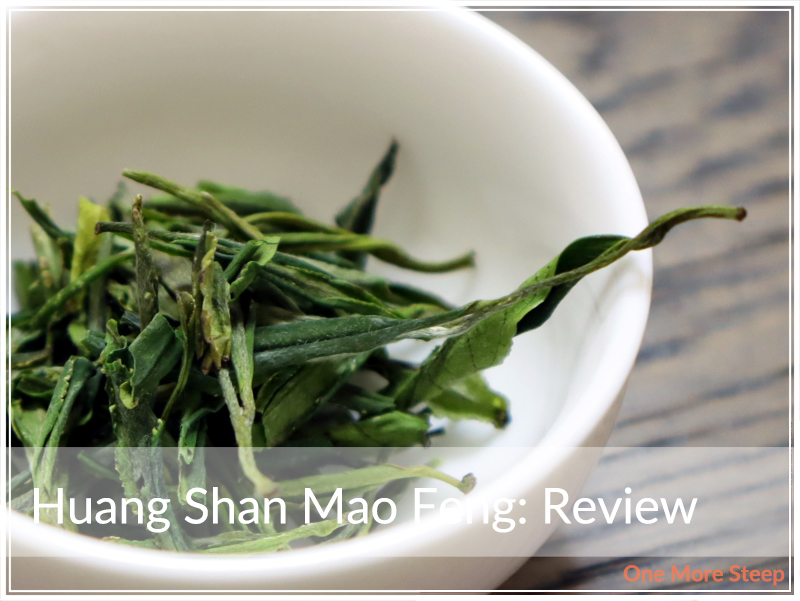 Masters Teas has provided me with Huang Shan Mao Feng for the purposes of writing an honest review.

Never one to shy around from trying a green tea, I was happy to receive this in the mail from Masters Teas. It came in a sealed, resealable bag with some information across the front. Huang Shan Mao Feng is described as being a premium green ta with “plenty of fuzzy tea buds”. I didn’t see too much fuzziness in the bag, but the leaves are a bright vibrant green with such vein definition, that I can forgive them for that. 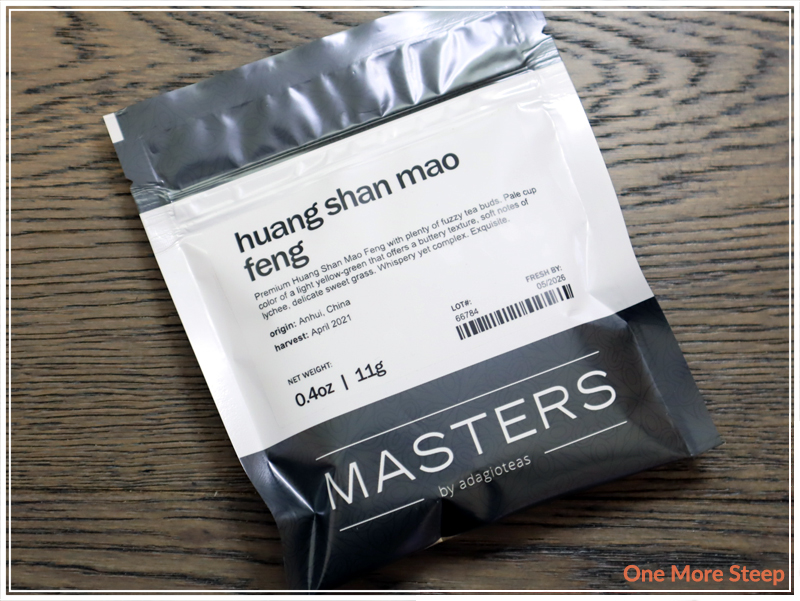 The leaves are beautiful and have a light floral yet fruity aroma to it. It just seems really delicate when I shake some out into my tea pot, the leaves are long and take up quite a bit of room, and has a nice sweetness to the smell. Huang Shan Mao Feng is from Anhui, China – presumably from Huang Shan (Yellow Mountain) and was harvested in April 2021, so what a treat it is to steep it in July of the same year. 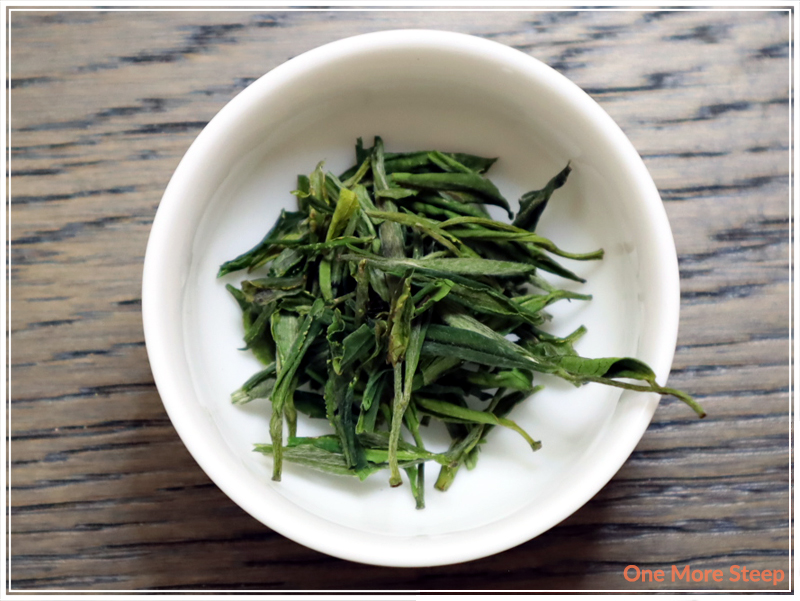 Huang Shan Mao Feng steeps to a pale yellow. The aroma is grassy and floral, the tea itself is smooth with a sweet floral flavour throughout. It has a nice lychee flavour – sweet, floral, fruity. It has a great mouthfeel to it – smoothness, sweet, fruity flavours. It’s a very light tea, sweet and some notes that remind me of snap peas – it makes for a nice vegetal flavour profile. 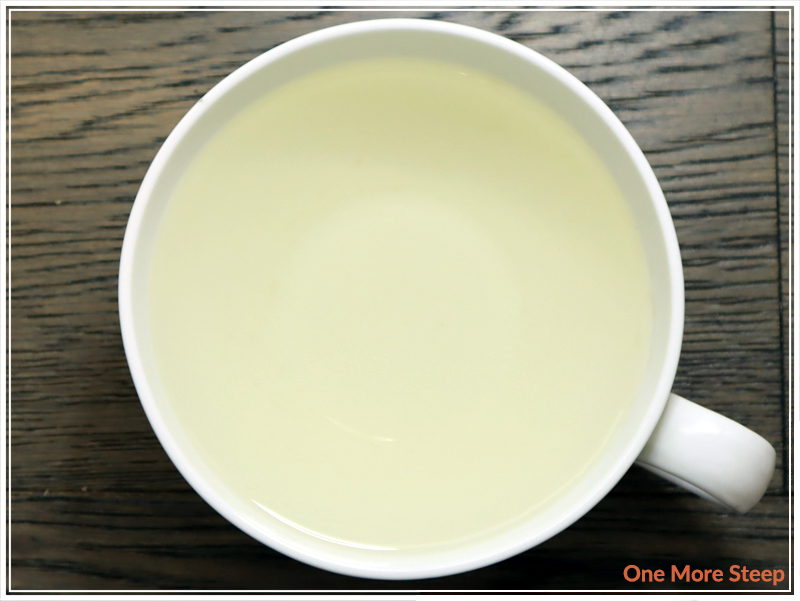 I resteeped Huang Shan Mao Feng a total of five times (six steeps total), adding an additional 30 seconds for each subsequent steep. The floral sweet flavour became more intense with each steep, peaking at the second resteep. The leaves open up quite a bit, and become more light green – it reminds me a lot of a spring grass colour. The colour of the tea becomes a deeper golden yellow in colour as the flavour becomes stronger. 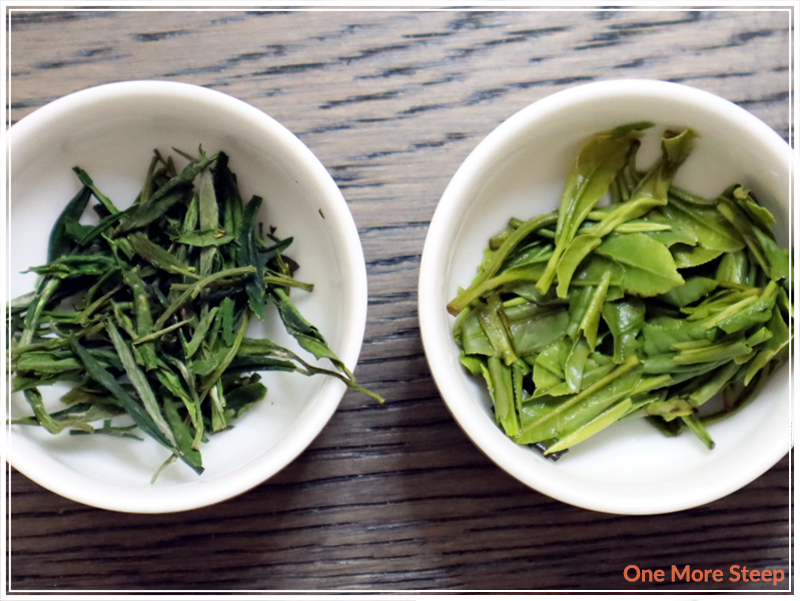 I loved Masters Teas’ Huang Shan Mao Feng. This single origin green tea is a treat from start to finish, with a nice aroma in the dry leaf, a great flavour, and resteeps well. It does make for a nice cup of tea, it steeps beautifully and it’s lovely to see the leaves as they open with each steep. The lightness in flavour makes for a cup of tea that could pair nicely with a dessert or savoury dish. 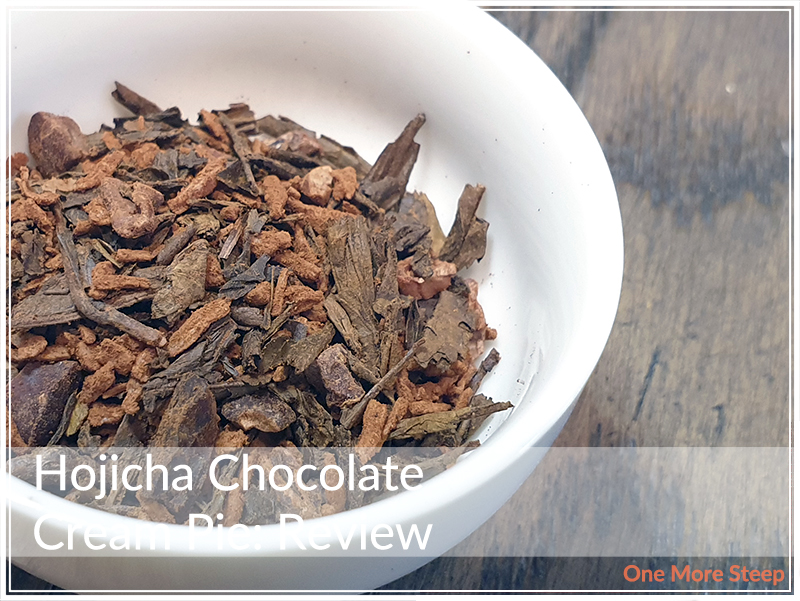 Hojicha Chocolate Cream Pie came to me as part of my Dessert by Deb subscription box. It came in a purple-pink metallic pouch that’s clear on one side with information about ingredients and suggestions to drink as a latte (don’t mind if I do…). When I first saw it, I didn’t see the words ‘hojicha’ and I thought it was a rooibos blend at first. But you know what they say about first impressions and judging a book by it’s cover… 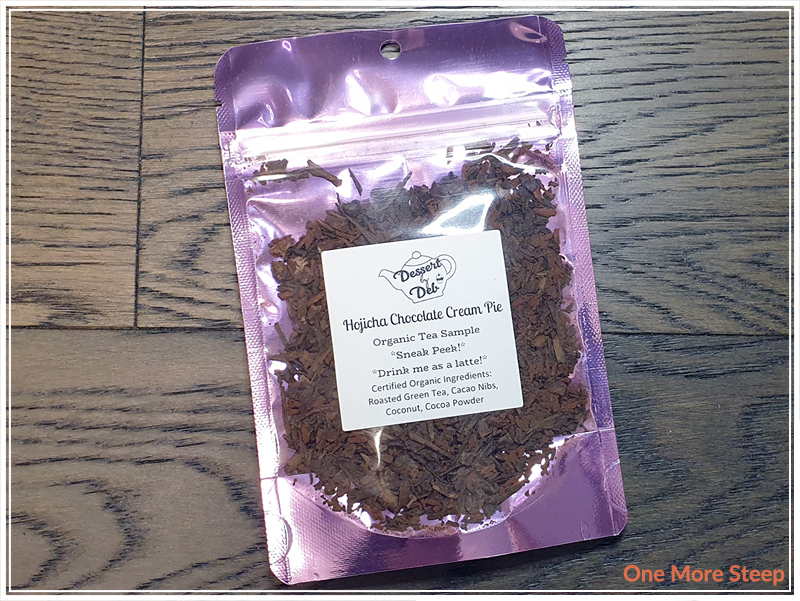 Hojicha Chocolate Cream Pie consists of organic: roasted green tea, cacao nibs, coconut, and cocoa powder. The aroma of the dry leaf to me is strictly chocolate and coconut. It smells like candy and I’m pretty excited about that. I think that the coconut got pretty covered in the cocoa powder, because I don’t see it present at all. 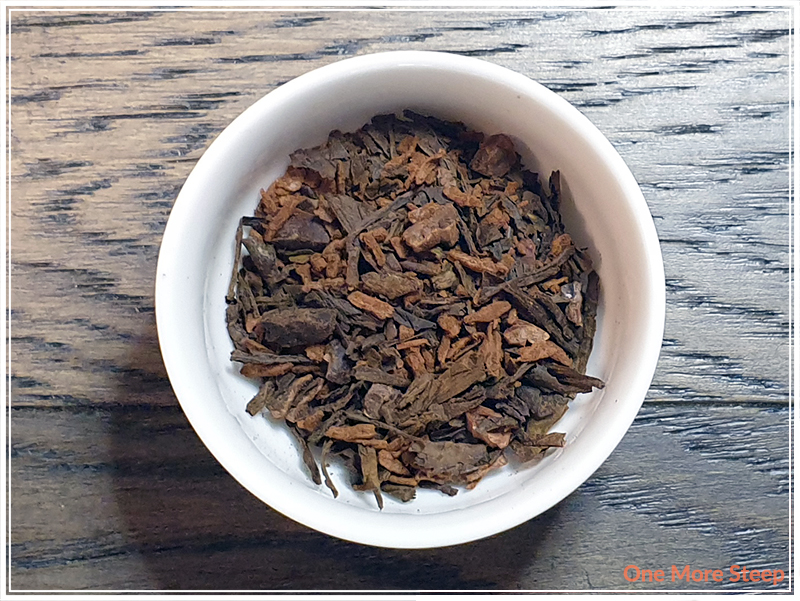 Steeping Hojicha Chocolate Cream Pie was… interesting. There’s an obvious oil slick across the top – thanks in part to the cacao nibs and coconut. The oils themselves are not harmful, if not a bit aesthetically unpleasing. Hojicha Chocolate Cream Pie steeps to a deep brown, it’s a bit murky, which I attribute to the cocoa powder and cocoa nibs. The aroma is strongly chocolatey with hints of coconut. I don’t smell the hojicha too much, as I think the cocoa just has a stronger aroma. The flavour is interesting – there’s some roasted notes, chocolate, and hints of coconut in the background. I’m not fond of it on its own. 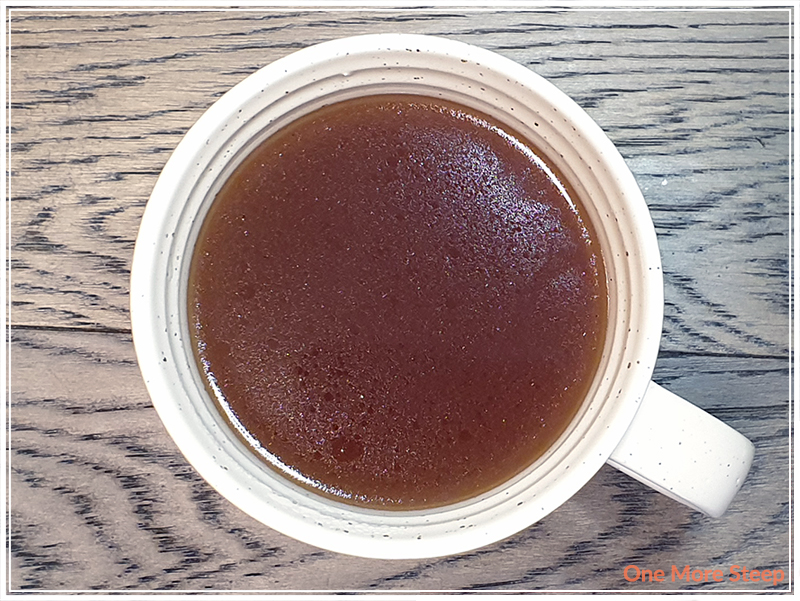 As Dessert by Deb did recommend having Hojicha Chocolate Cream Pie as a latte, I opted to do that because that’s how it’s intended to be consumed. I heated up, and frothed soy milk and turned my cup of Hojicha Chocolate Cream Pie into a tea latte. It certainly adds a nice level of creaminess to it, the addition of soy milk turns it into a liquid dessert. The level of chocolate flavour comes out really well and is more like a milk chocolate flavour as a tea latte. The roasted notes from the hojicha do come through nicely, and adds a nutty flavour to it. 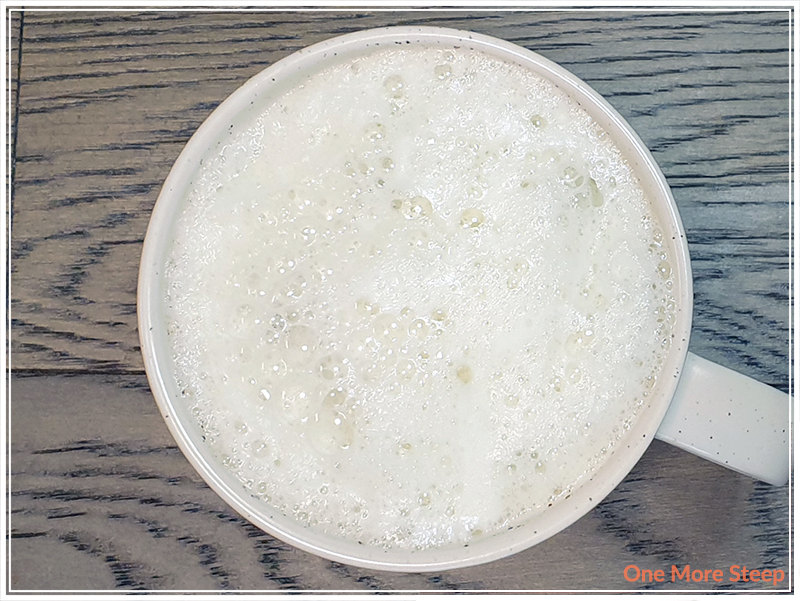 I resteeped Hojicha Chocolate Cream Pie once, adding an additional 30 seconds for the resteep. I found that the flavour wasn’t quite up to snuff in comparison to the initial steep, especially on the chocolate front. Although, check out the coconut that’s visible after the initial steep and the cocoa powder is washed off of it! 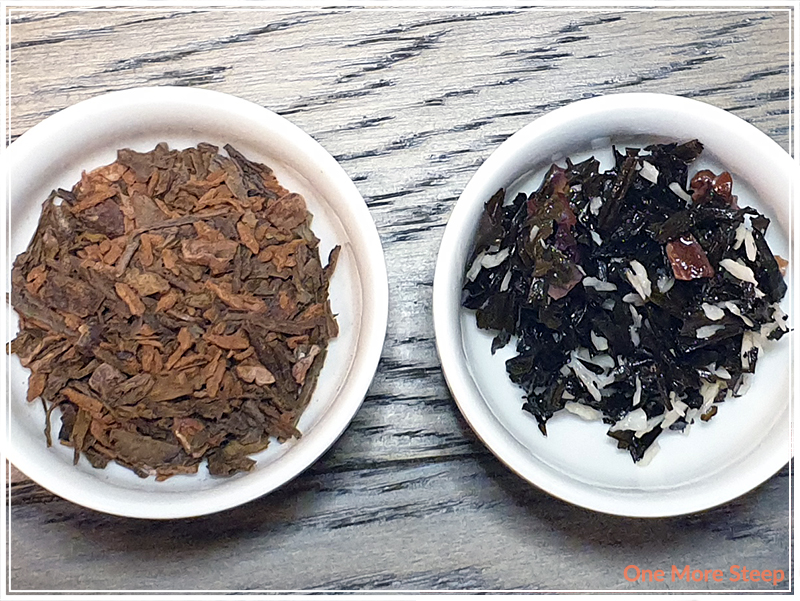 I loved Dessert by Deb’s Hojicha Chocolate Cream Pie as a tea latte. I unfortunately didn’t enjoy it straight, but it was great as a tea latte and definitely made for a nice chocolate treat with the roasted notes from the hojicha. It had a nice flavour, and I do like a nice dessert tea from time to time. 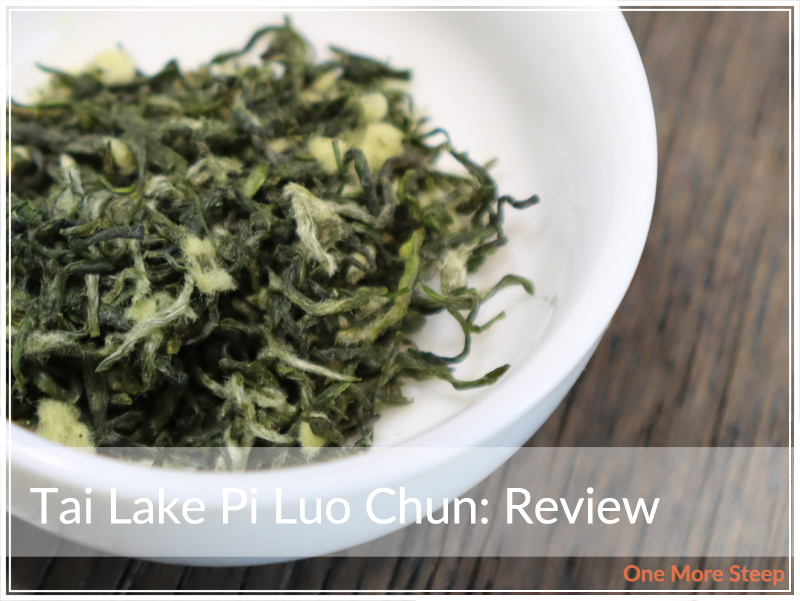 Masters Teas has provided me with Tai Lake Pi Luo Chun for the purposes of writing an honest review.

Tai Lake Pi Luo Chun comes in a sealed, resealable pouch from Masters Teas. I’m always a fan of trying out single origin teas because it’s just such a treat to experience the subtle flavours that come from a single origin tea – something that you just don’t get when it comes to having a blended tea. For instance, an Earl Grey created by a large tea company blends black teas from different sources to create a consistent flavour – but with a single origin tea, from a specific harvest, allows you to experience the flavours created from a very specific area, at a specific time. Year to year comparisons allow you to taste the difference from soil nutrients, amount of rainfall, and the distance from sea level. 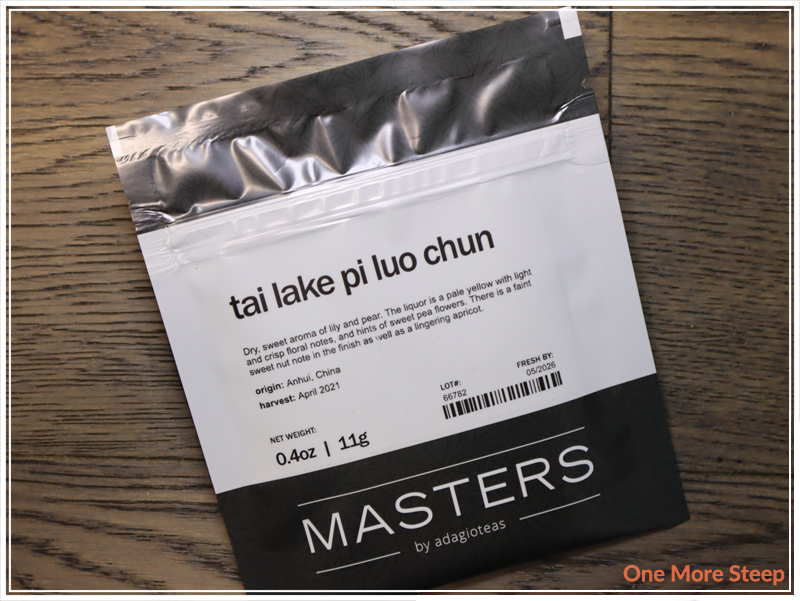 Tai Lake Pi Luo Chun is a beautiful twisted green tea leaf. It has a sweet aroma that is fruity and floral to me. There’s a lot of yellow ‘fluff’ to it. This was recently discussed by Nicole of Tea For Me Please on her Instagram – that fluff is trichomes! The natural little hairs that exist on the tea leaves to help protect them from UV damage via the sun, and is generally a sign of a higher quality tea. Tai Lake Pi Luo Chun comes from Anhui, China and was harvested April 2021. 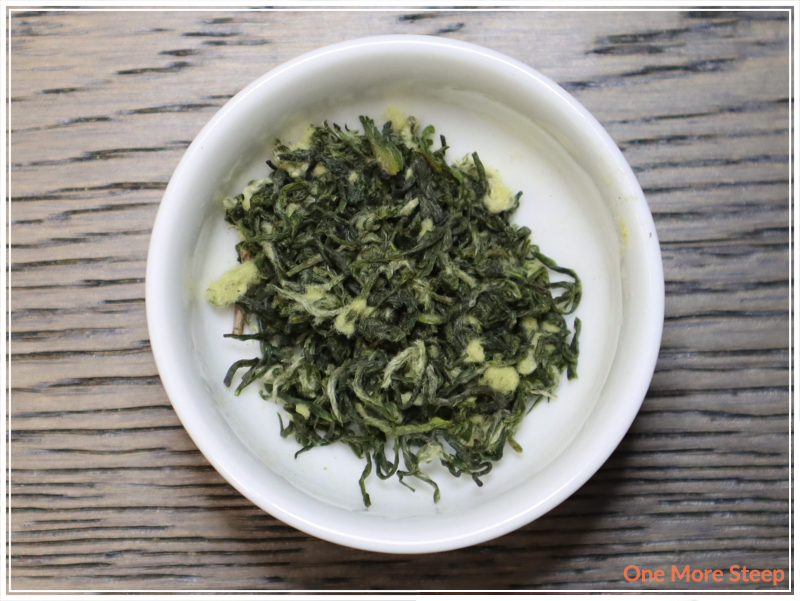 While there were no steeping instructions on the sample packaging, I was easily able to find that information from the product page on the Masters Teas website.

Tai Lake Pi Luo Chun steeps to a lovely pale yellow colour. The aroma is floral and sweet, it has something about that makes me think of summer. The flavour of this tea is lightly fruity – reminding me of Bartlett pears, with some sweet floral flavours that linger on the tongue throughout each sip. I found that the tea itself has a bit of a thickened mouthfeel to it, that left me wanting more. There’s no astringency, but just something about it that was almost drying. 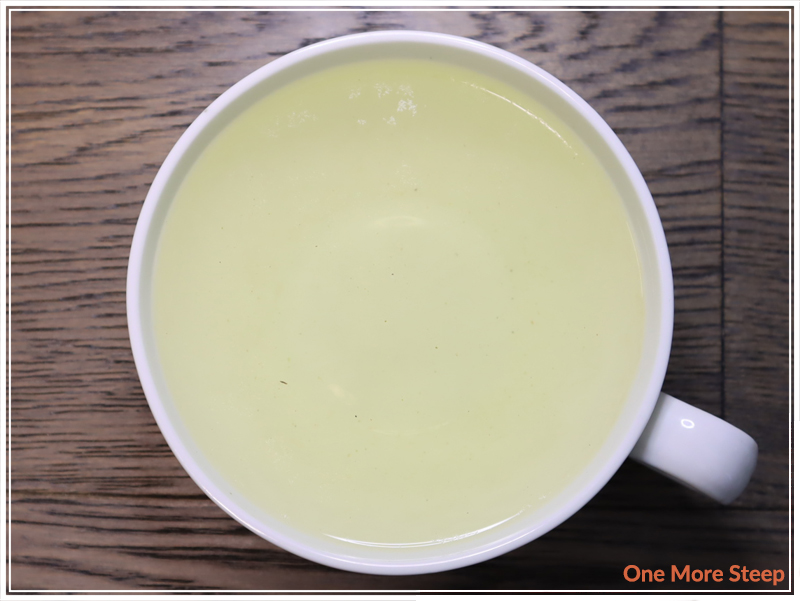 I resteeped Tai Lake Pi Luo Chun a total of six times, adding an additional 30 seconds for each subsequent steep. I found the tea to get more floral and less fruity with each steep, while the sweetness got richer. The colouring became more golden as I went. Also, just check out those amazing leaves – the leaves are a bright and vibrant green. 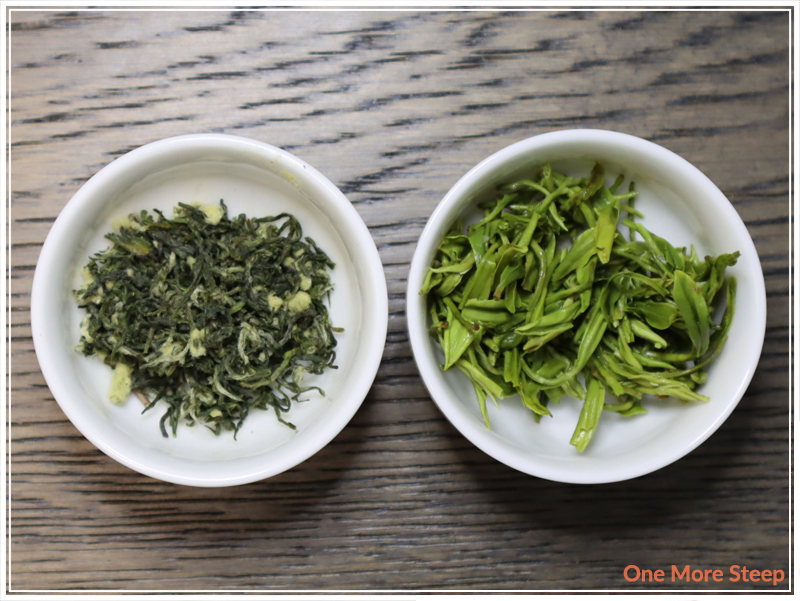 I loved Masters Teas’ Tai Lake Pi Luo Chun. This was a lovely treat to experience, getting to try such a recently harvested single origin green tea. The flavour of the tea is fruity and floral, and I enjoyed each sip as I went through all of the resteeps of the same leaves. I would highly recommend resteeping the leaves if you have the time, and also enjoying it cooled or iced for a bit of summer refreshment.

Happy weekend, tea friends! Did you know that the

What do you get when you add popped rice and brown

While I may not be able to enjoy international tra

Happy "I think you and I should both have macarons

I'm all for having green tea, especially when the

Swipe to see me make an Iced Lavender Matcha Latte