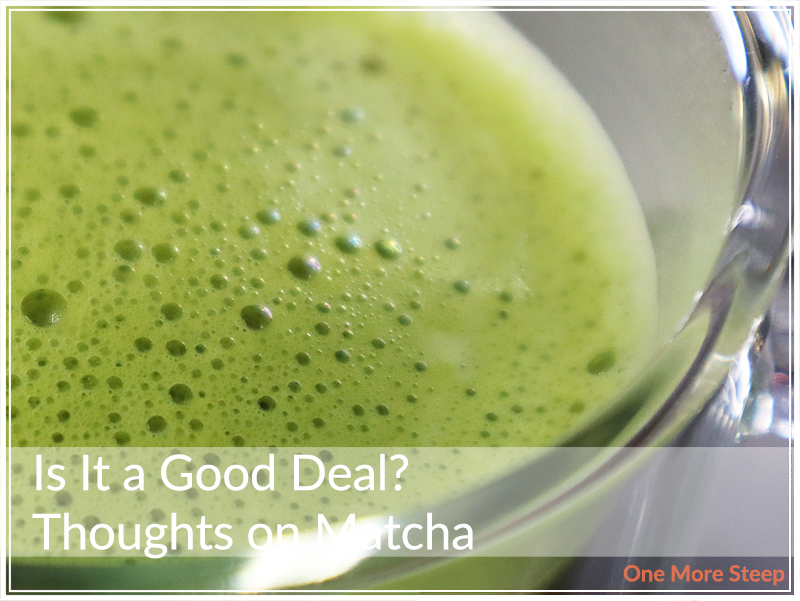 Matcha is green tea that has been ground to a fine powder. With history that tracks back to Tang dynasty of China, the more familiar matcha that you may know and love is from Japan. You may have tried matcha from your favourite local coffee shop in the form of a matcha latte, or ordered a flavoured matcha blend from an online retailer. 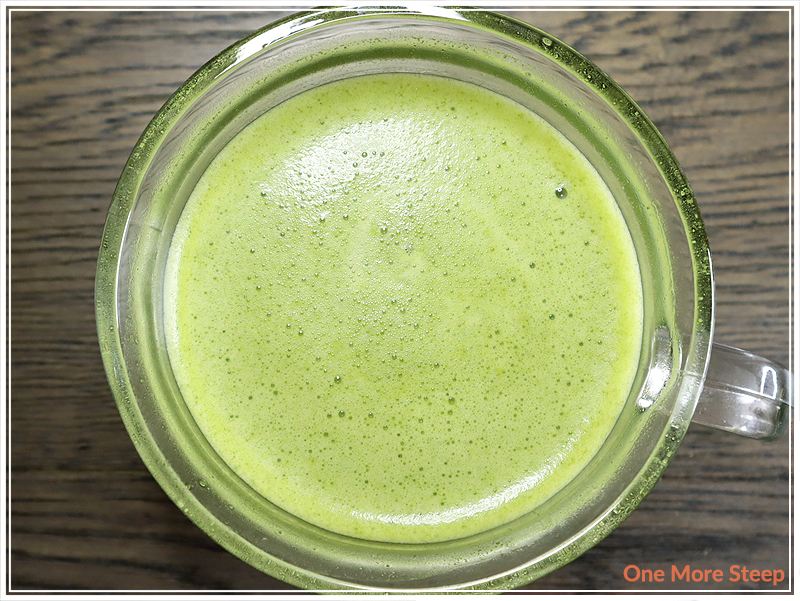 I won’t make much comment on matcha blends – they should be considerably cheaper than pure matcha options available to you because of all the additives (sugars, flavourings, powdered milk, preservatives, etc.). However, these can also be delicious and I am still on the search for a great instant latte option. 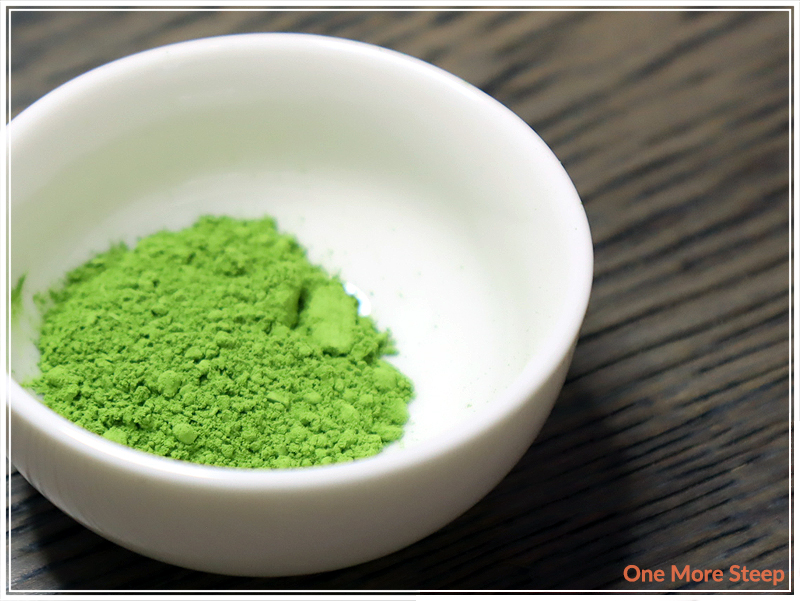 Signs of a good quality matcha:

Spring-green in colour
Very fine powder
Has an umami flavour, not bitter
Forms a layer of froth easily

Signs of a poor quality matcha:

Yellow-green in colour
Clumpy powder
Often bitter
Forms a layer of large bubbles, instead of froth 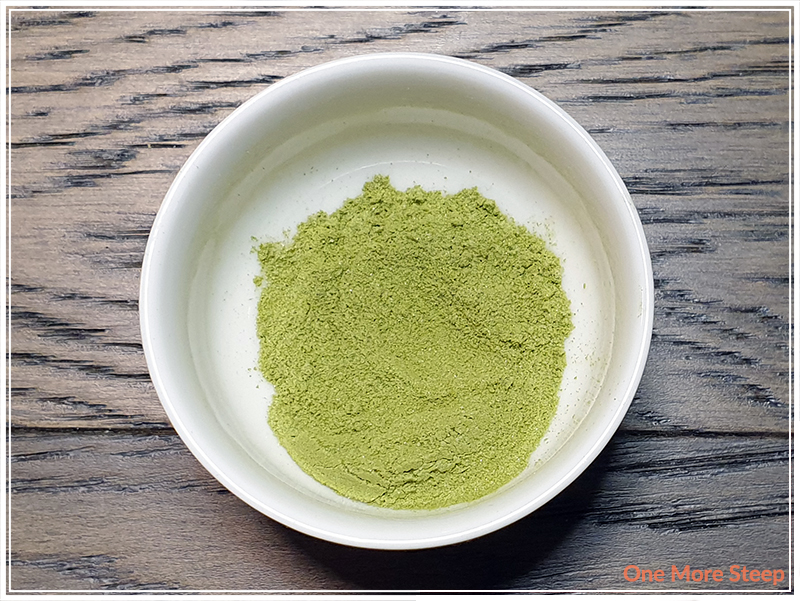 All good quality matcha should come from Japan, and also be ideally single origin in nature. It can come in either sealed foil packets or tins, with appropriate labelling. While matcha has been deemed a “super food” and can be found in a lot of grocery stores, matcha is not going to be as high quality compared to matcha purchased from specialty tea stores (brick and mortar or online). Quality doesn’t come cheap though! A good benchmark is ~$1CAD per gram – that $9.99 tin of 250g of matcha might seem like a great deal, until you realize it’s incredibly bitter and doesn’t even work well in cookies. 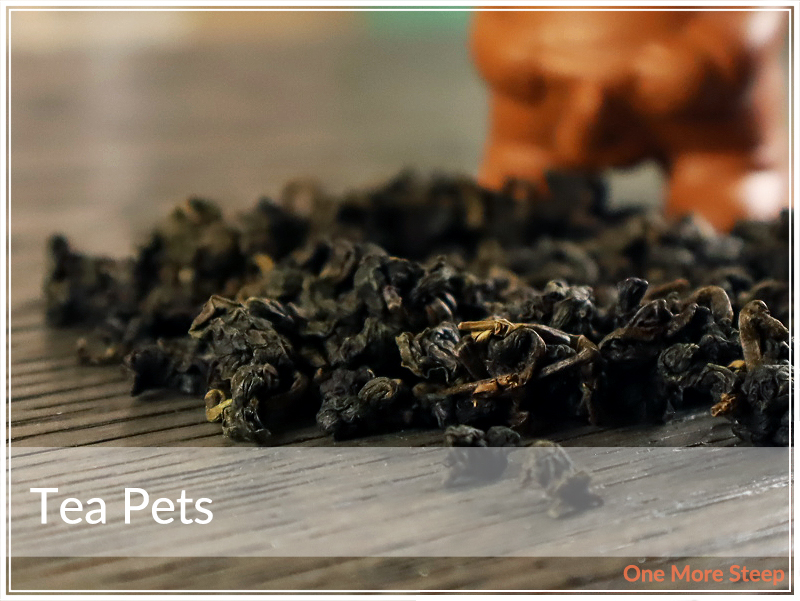 Tea pets are one of the more whimsical parts of Chinese tea culture.

There’s no real purpose to having a tea pet, besides having a cute figurine to join you in your tea drinking sessions. There are different types of tea pets – some squirt water, some blow bubbles, and some are just there to soak in the tea. 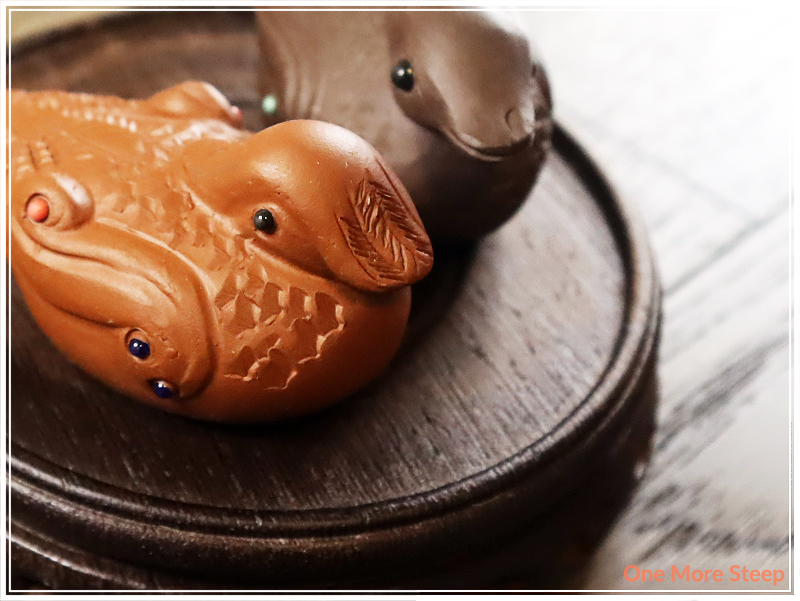 Traditionally, tea pets are made out of unglazed Yixing clay – same as traditional Chinese tea pots.

They can be all sorts of different animals – dragons, pigs, birds, snakes! You might want to get one because it looks cute, or because it’s your Chinese zodiac sign. Perhaps you have a dog or a cat and you came across one that looks just like your (furry) pet. Some many even have beads or be partially glazed – and those glazed parts might even be colour changing after having hot water poured onto them (they’re very fun to watch!). 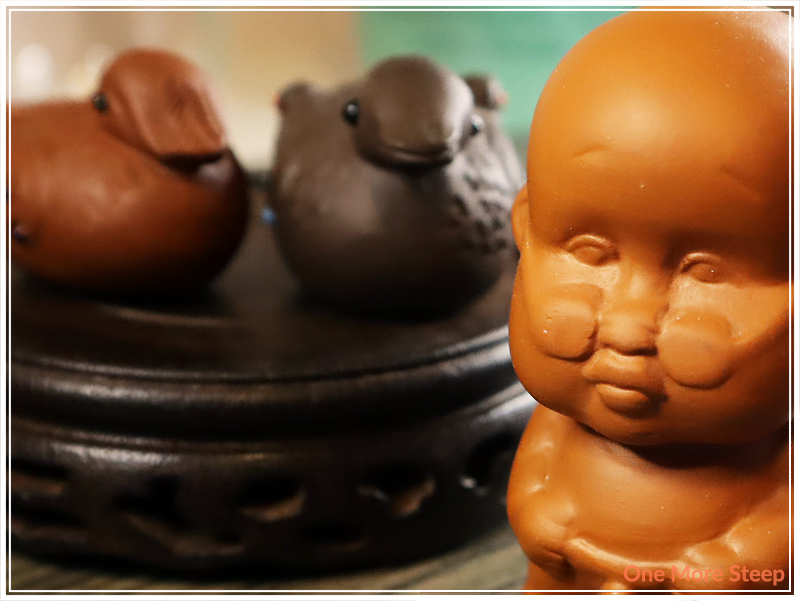 One of the more popular tea pets is actually the Pee Pee Boy (see photo above). The Pee Pee Boy is a hollow figure, and gets his name from the fact that he “pees”. To fill up the little guy, put him into a bowl of cool water and wait until it fills up. To make him “pee”, pour hot water over his head and the water will shoot/squirt out of the Pee Pee Boy. I actually got my Pee Pee Boy years before I started tea blogging, it was a souvenir from my parents’ travels and got to witness him “pee” across the kitchen.

You can pour water onto your tea pets (the water used to warm up your tea pot), pour a bit of tea on them during the process of filling up your cup, or pour leftover tea at the end of your tea drinking session. If you have a tea pet that’s made with unglazed clay, you’ll notice that the clay changes colour when wet and over time (from the tea!). The aroma of your tea pet will also change over time as it absorbs the tea. 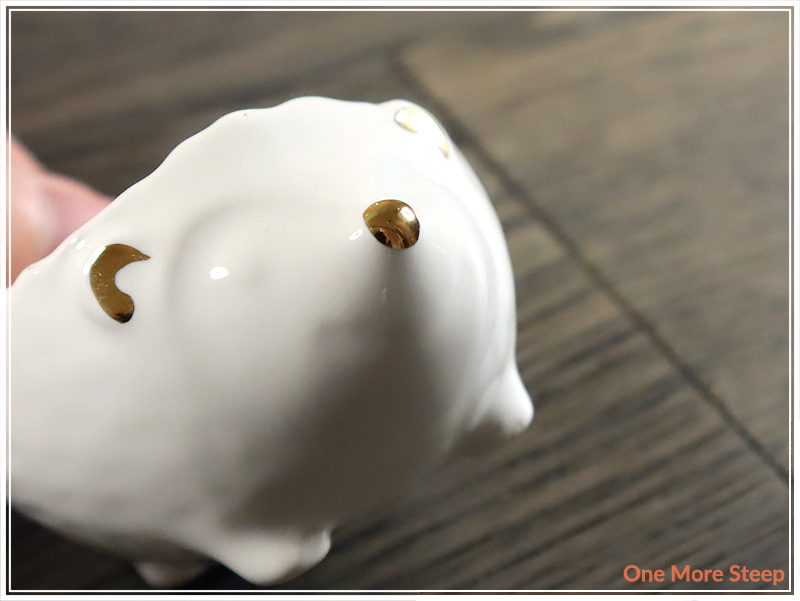 Then there are the untraditional tea pets.

My little hedgehog friend, who’s been featured in blog & Instagram photos before, is an example of an untraditional tea pet. He’s glazed and not really “meant” to be a tea pet. I think he was actually meant to be a little desk catch-all dish, or even for a small air plant (who knows?). Whatever he was meant for, his purpose now is to hold tea leaves. I don’t “feed” him any tea, mostly because he usually holds dry tea, but he’s still pretty cute and hangs out on my tea table while I prepare tea. 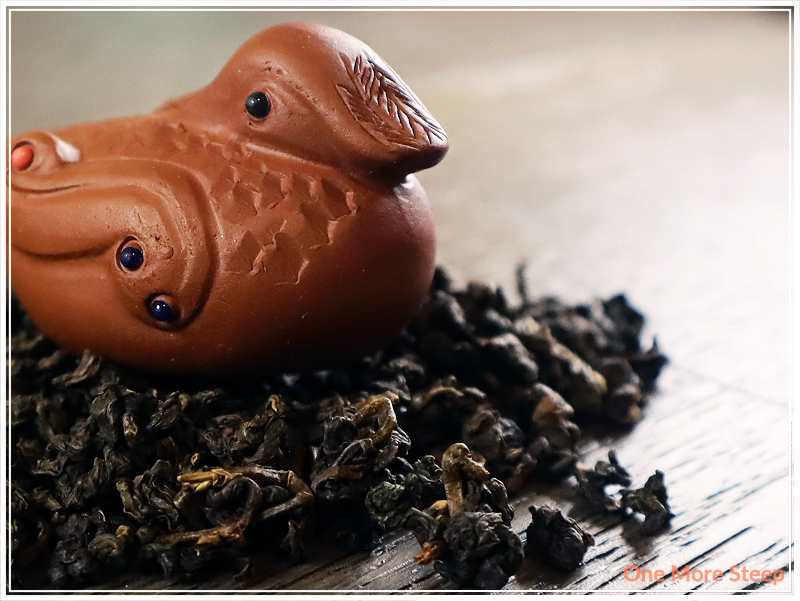 Some people name their tea pets, but it’s not a necessary component to keeping tea pets. The only important thing about having tea pets is to enjoy them and have fun with them!

Do you have any tea pets? What are yours? 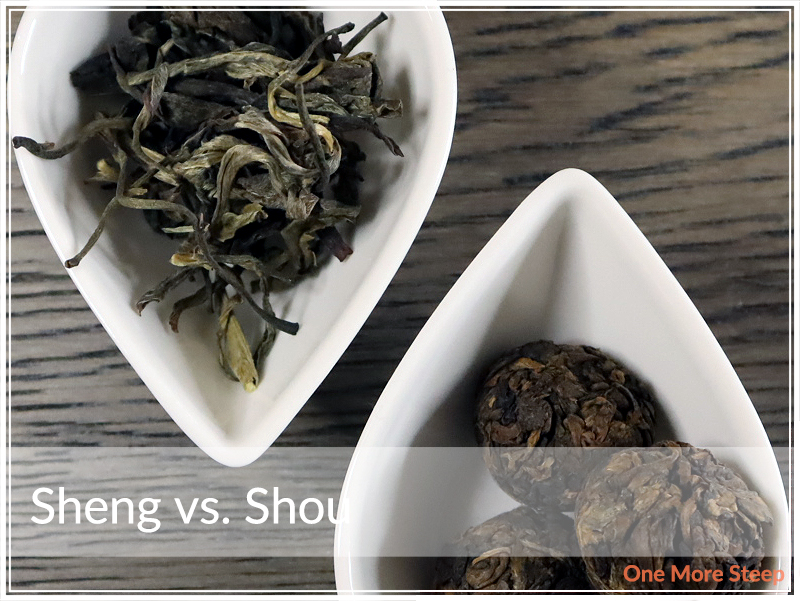 Out of all the types of tea that exist out there, pu’erh is generally one that I discuss the least on One More Steep with yellow tea being, by far, the most rarely discussed if only because of the rarity of the tea itself. But pu’erh is also a tea that I grew up drinking a lot. It’s a staple at dimsum restaurants and a fantastic tea for long tea drinking sessions because a good pu’erh typically resteeps incredibly well.

Pu’erh is one of those teas that seems mysterious to a lot of tea drinker that don’t dabble into more Chinese teas. If your tea cabinet consists primarily of Earl Grey, chamomile, and peppermint, pu’erh probably isn’t one of those teas that is lurking in the cabinet if only because it’s not your jam. In Chinese, pu’erh tea is also called hei cha (literal translation: dark or black tea), which is very different from what western culture calls black tea (which, in Chinese, is called hong cha; with the literal translation of “red tea”).

Pu’erh is a fermented tea – either through time or through a sped-up process – that uses micro-organisms to contribute to the process and the flavour. There’s two primary categories that I will discuss: sheng pu’erh and shou pu’erh. Please keep in mind that I am not an expert on pu’erh tea, and nor do I pretend to be one, and I will be discussing the basics of both sheng and shou pu’erh, as well as similarities of both.

You will also find pu’erh being written as pu’er, pu-erh, pu-er, puerh and puer on the internet. Just to add to any confusion you might have had about this category of tea. For consistency’s sake, you will see that I use pu’erh on One More Steep. 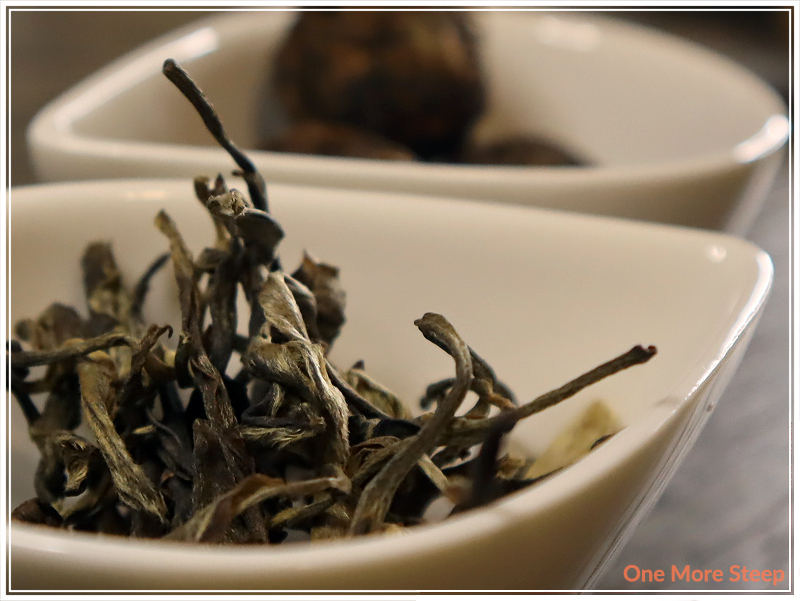 Sheng pu’erh has many other names, as does shou pu’erh.

There are a lot of factors that go into producing a good sheng pu’erh and I’m not able to educate you on it (because it’s simply not in my wheelhouse), but intentionally allowing a tea to age also means keeping an eye on things like moisture/humidity that the tea is exposed to – because you want to age the tea… and not grow a pile of mold. 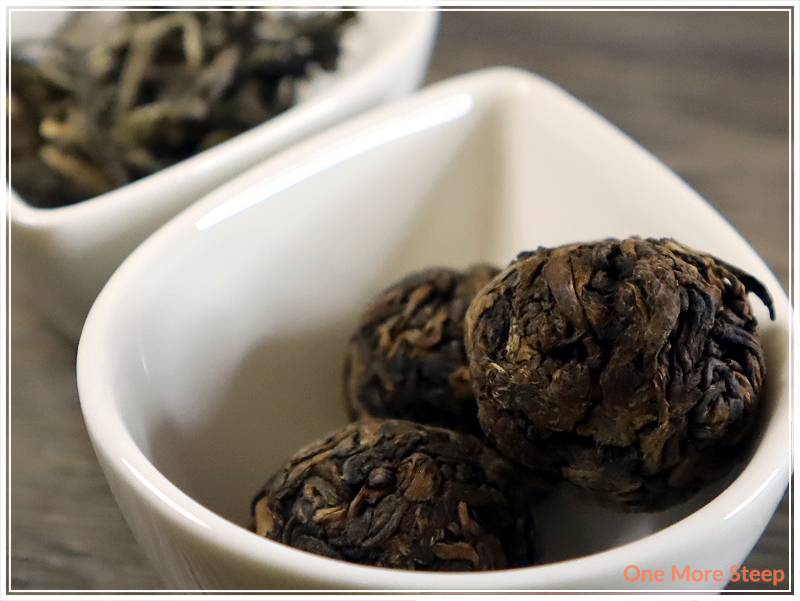 Shou pu’erh on the other hand is a ripe or cooked pu’erh/tea. The production method of shou pu’erh involves creating a large pile of leaves, and intentionally keeping the leaves moist and warm to encourage beneficial bacteria and molds to grow, and then turning the leaves to encourage even fermentation (much like you would turn a compost bin). Once properly ‘cooked’, the leaves can be pressed into shape like sheng pu’erh, but the tea itself is ready-to-drink and no further aging is required.

Shou pu’erh is the “young” version of pu’erh, with the development of the processing method coming into play in the 1970’s with the growing popularity and demand for pu’erh tea. After all, it’s a long time to get a sheng pu’erh to a drinkable state if you’re patiently waiting for the tea to age and ferment. Shou pu’erh fills in that demand by making pu’erh more accessible (less expensive!) in comparison to a slowly aged sheng pu’erh.

As a whole, pu’erh is less accessible in North American markets, but the typical North American tea drinker is also not the primary demographic that consumes pu’erh tea. I find that shopping in person for pu’erh tea is limited to Chinese/Asian grocery stores, and specialty tea shops. If you’re lucky to live in an area with a Chinatown, finding a tea shop that features pu’erh might be within your grasp. If you’re not, then online shopping is always an option! Try to look for online stores that offer samplers or smaller amounts of pu’erh – you don’t want to be venturing into purchasing a whole 500g brick for your first pu’erh adventure.

Pu’erh is fantastic tea to steep – typically a pu’erh is unadulterated, so you don’t have added ingredients or flavourings, making it a great tea to resteep. A pu’erh is a great way to practice gongfu steeping and also grandpa steeping. If you have the option of pu’erh tea at a dimsum restaurant, I’d highly recommend it (that would be usually a grandpa style of steeping tea).

As a whole, pu’erh is often a very rich, dark colour when you steep the leaves. The flavour is honestly very difficult to describe unless you have the tea available to you because there are so many factors that influence the flavour. How long the tea has been aged, how well it was kept (was there too much moisture or humidty, or not enough?). I typically find that pu’erh has a very earthy aroma and flavour to it though, which is likely due to the fermentation process with the microbes.

Two bricks of sheng pu’erh are unlikely to be identical because there’s just so many factors that go into the flavour of the tea during the fermentation process. Shou pu’erh, on the other hand, is more likely to have a consistent flavour because of the process in which it’s made (quicker, not relying on decades of time and changes in conditions). That said, I personally find that sheng pu’erh can be much more complex in flavour because of the time allowance to grow that depth of flavour.

Both sheng and shou pu’erh can be a great tea to enjoy if you’re looking to expand your tea-drinking horizons. Have you tried it before? Do you enjoy pu’erh regularly?