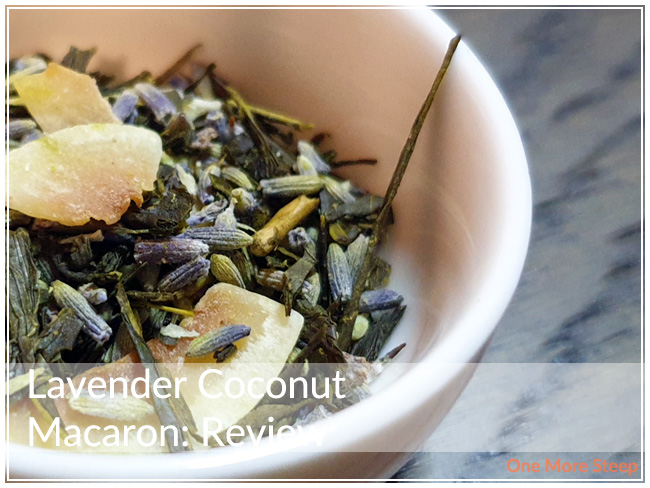 Lavender Coconut Macaron is an exclusive blend for Dessert by Deb subscription subscribers and is available for purchase by subscribers only at this time.

Lavender Coconut Macaron came in a sealed, resealable pink pouch with a very familiar colourful label on the front. This is Tea Society Club exclusive, which is a great little perk of being a subscriber to the Dessert by Deb subscription box (which basically means I get a present to myself from myself every two months with some cool tea blends). 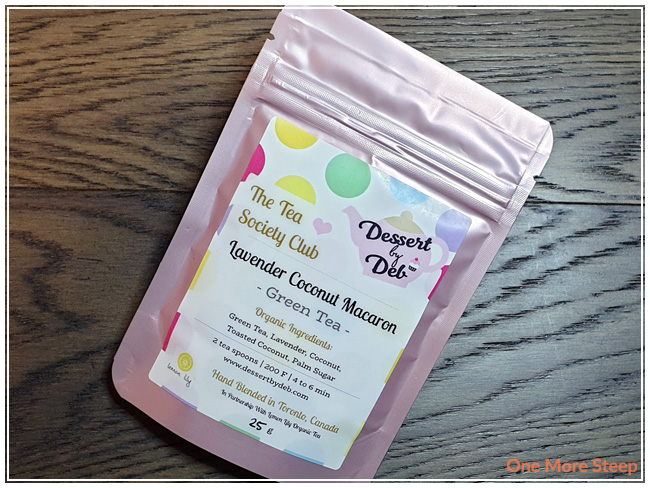 Lavender Coconut Macaron consists of all organic: green tea, lavender, coconut, toasted coconut, and palm sugar. The aroma is really strongly lavender with a hint of toasted coconut in the background. Lavender is such a strong and forward ingredient, and I really like it – it’s one of my favourite starring blend ingredients. This is definitely a floral-forward green tea blend so if you’re not a fan of floral or lavender in particular, it’s probably not the blend for you. For me, I love lavender, so I’m pretty happy with the delicate aromas, the feminine and delicate feel to the blend with the lavender heavy mix. 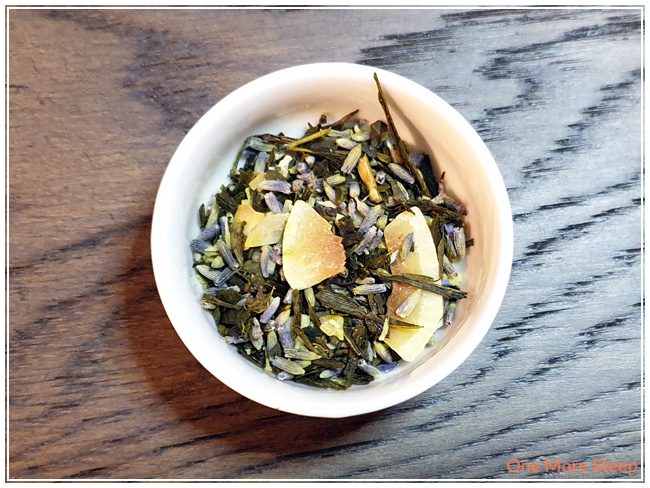 Dessert by Deb recommends steeping Lavender Coconut Macaron in 200°F (93°C) water for 4 to 6 minutes. I opted to follow the water temperature recommendation and did an initial steep for 5 minutes.

Lavender Coconut Macaron steeps to a pale yellow colour. It’s very lavender forward in the aroma from the steeped tea. The flavour is first and foremost lavender – very floral notes, and it has a nice sweetness to it, with the toasted coconut as an undertone. I don’t really taste the green tea base, and I think that has a lot to do with the fact that the lavender and coconut being so strong. 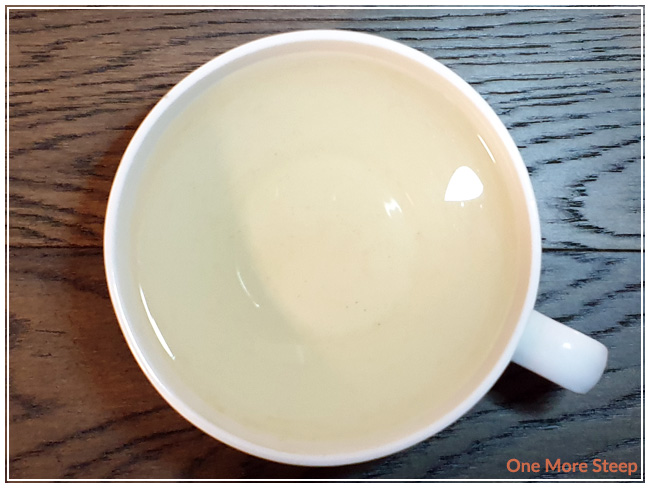 I resteeped Lavender Coconut Macaron twice, adding an additional 30 seconds for each subsequent steep. I found that the flavour wasn’t as floral as I enjoyed in the initial steep, so I preferred the initial steep the best. 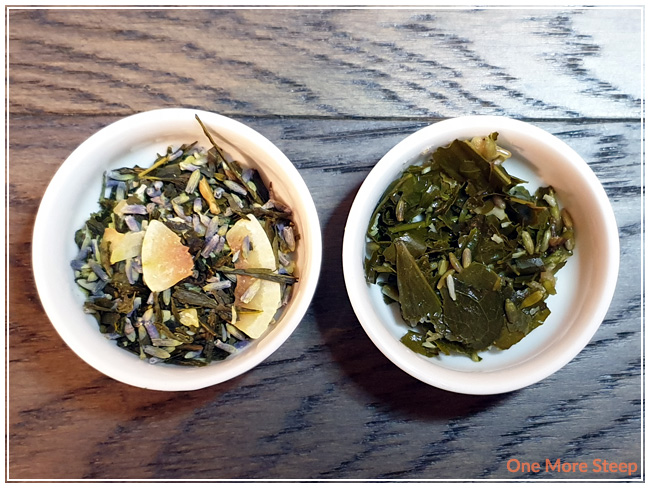 I liked Dessert by Deb’s Lavender Coconut Macaron. I really enjoyed just how strong the lavender is, how forward such a delicate feeling flower is in this green tea blend. While I couldn’t taste the green tea base very well, I found that the toasted coconut did really well against the lavender and it really just makes for a lovely cup of tea. It’d be a great addition to an afternoon tea line-up just for the delicate floral notes, and I think it’d be great iced with a splash of lemonade to really amp it up and make it into a great summer iced tea. 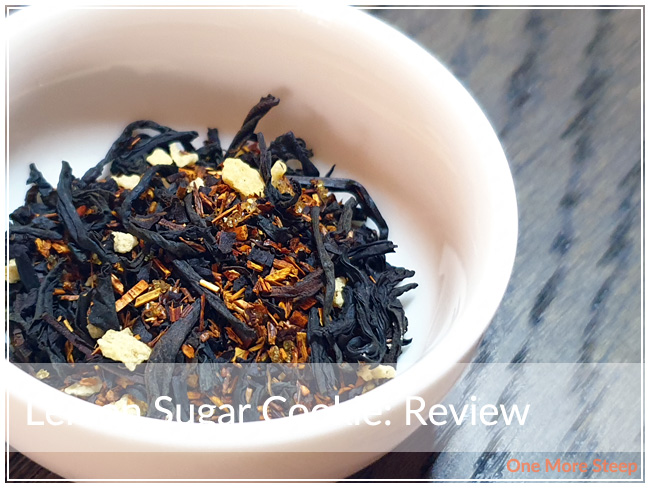 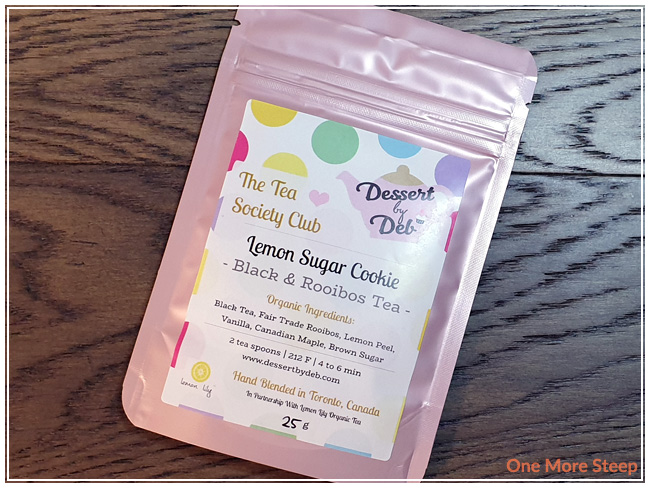 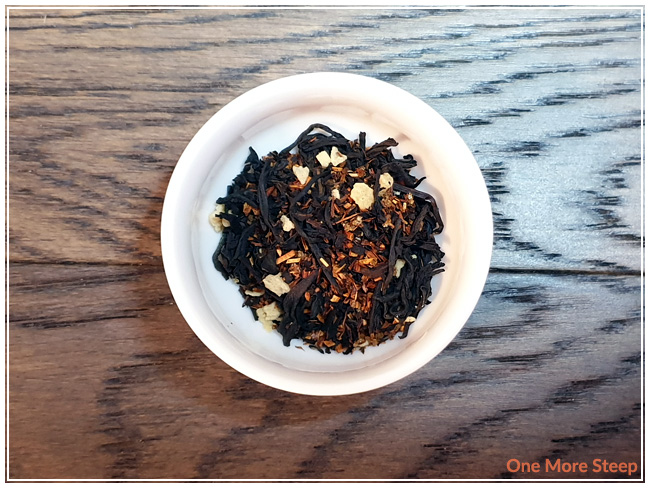 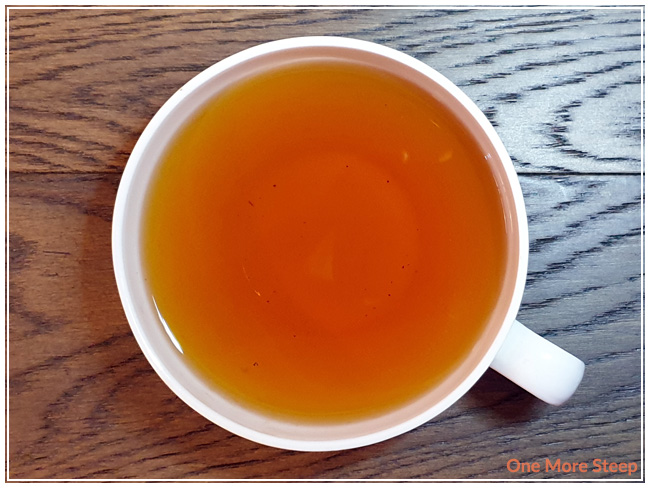 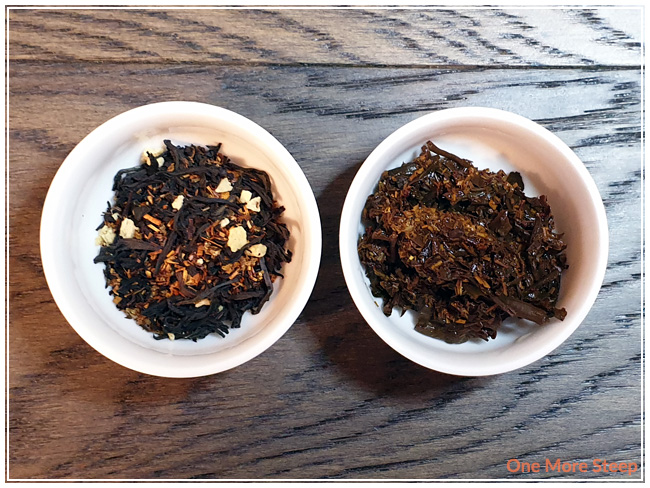 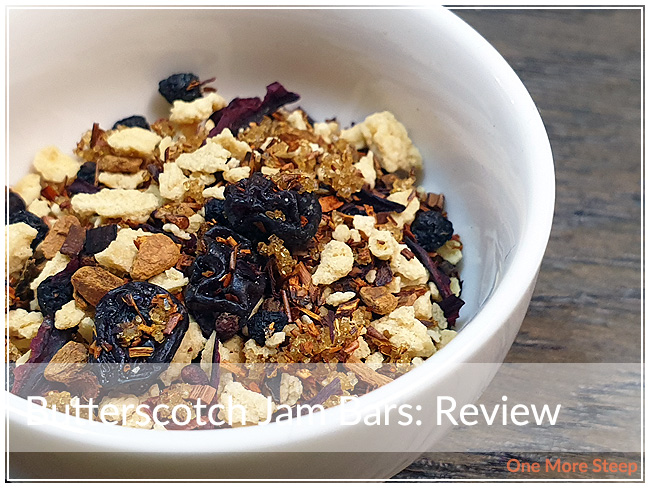 Butterscotch Jam Bars is an exclusive blend for Dessert by Deb subscription subscribers and is available for purchase by subscribers only at this time.

Butterscotch Jam Bars is a rooibos blend that came in one of my subscription boxes, and it is a subscriber exclusive. This rooibos blend comes in a gold sealed, resealable pouch, with a colourful label across the front. I’m personally keeping my fingers crossed that I don’t smell or taste the rooibos because it’s not one of my favourite ingredients – I tend to find that rooibos reminds me of a medicinal flavour. 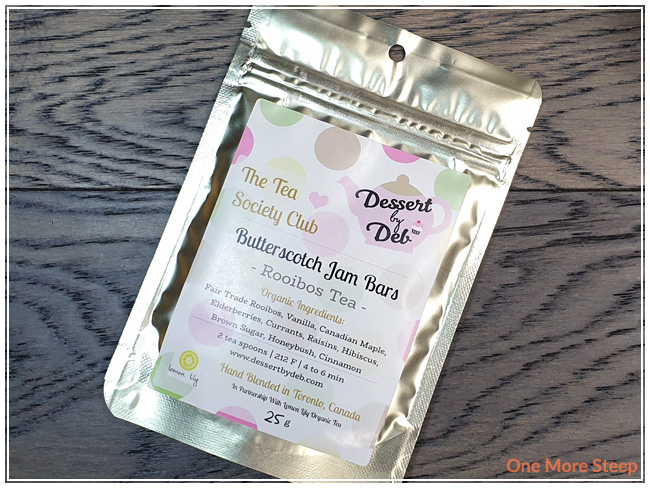 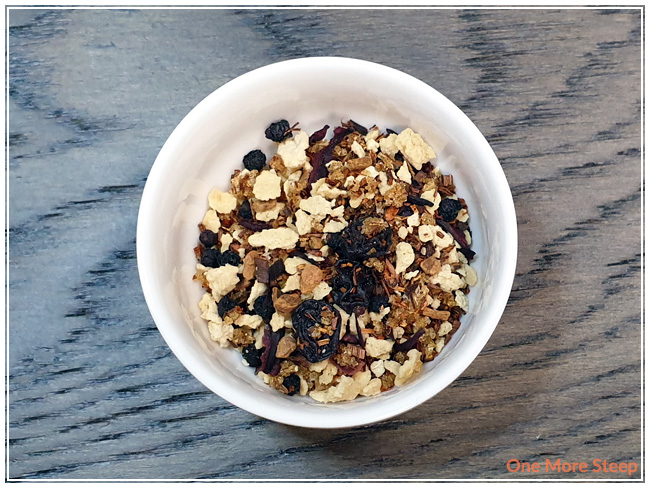 Dessert by Deb recommends steeping Butterscotch Jam Bars in 100°C (212°F) water for 4 to 6 minutes. I followed the recommended steeping temperature and did an initial steep for 5 minutes.

Butterscotch Jam Bars steeps to a nice orange colour with a bit of a pinkish hue to it, which I credit to the hibiscus, of course. There’s the aroma of vanilla and brown sugar, with hints of raisins in the background. I found the blend to be nicely sweet, with that brown sugar and maple in the mix. It definitely tastes like a dessert, and that it should be more of a guilty pleasure that it is given the flavour of the blend. It tastes like a cake, which is really scrumptious. The big bonus (for me!) is that I can’t taste the rooibos base itself, all I taste is vanilla, raisins, brown sugar, and the hint of maple in the background.

I really don’t think that it needs a sweetener, but if you do choose to add something, I would go with brown sugar or maple syrup to play up some of the flavours that exist in the blend. 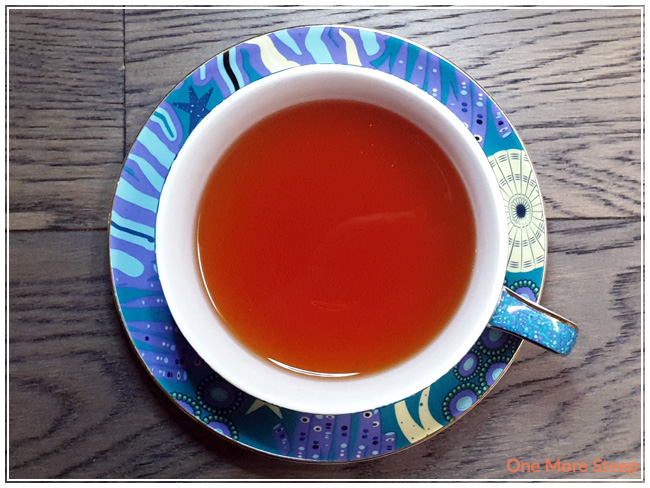 I attempted to resteep Butterscotch Jam Bars, but found that the second steep was more rooibos and less dessert-like. Which means, if you’re a fan of rooibos, then steeping again is a great way to go. 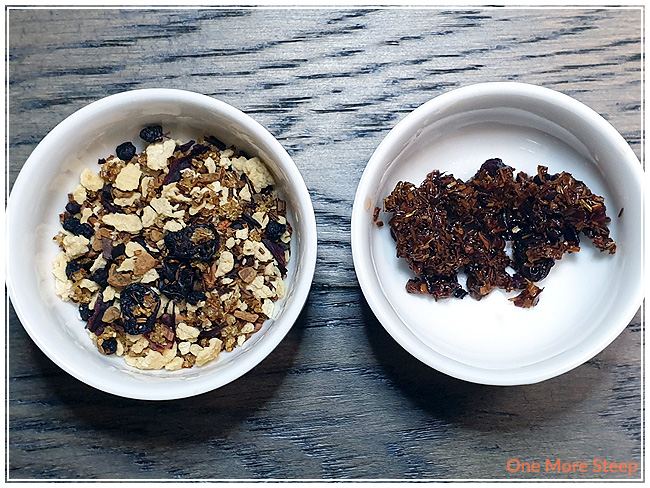 I liked Dessert by Deb’s Butterscotch Jam Bars. I really appreciated the care into developing the flavours that shone through in the initial steep. The use of brown sugar and maple with the blend of elderberries, currants, and raisins, really helped to create the flavour of a baked good. The initial steep was definitely preferred by me over the resteep because I’m not a fan of rooibos. For those who do love rooibos though, I think you’ll get more enjoyment from resteeping it.