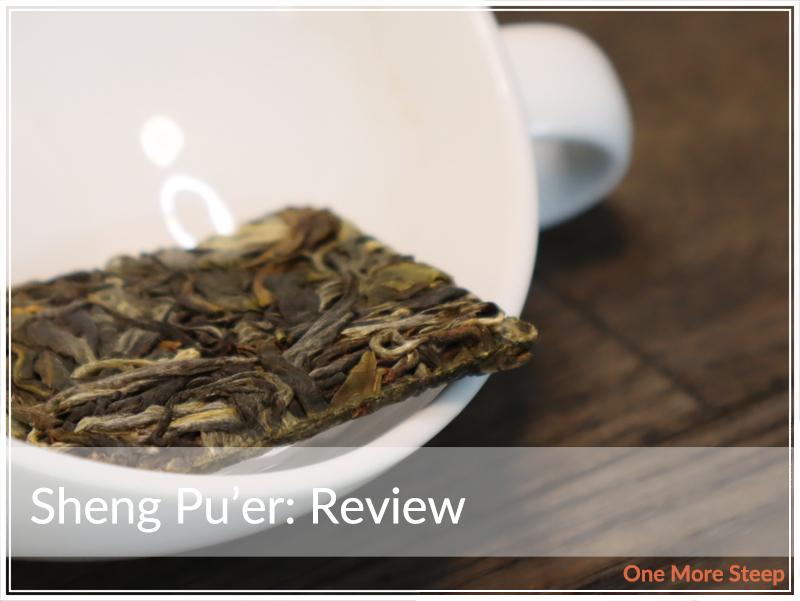 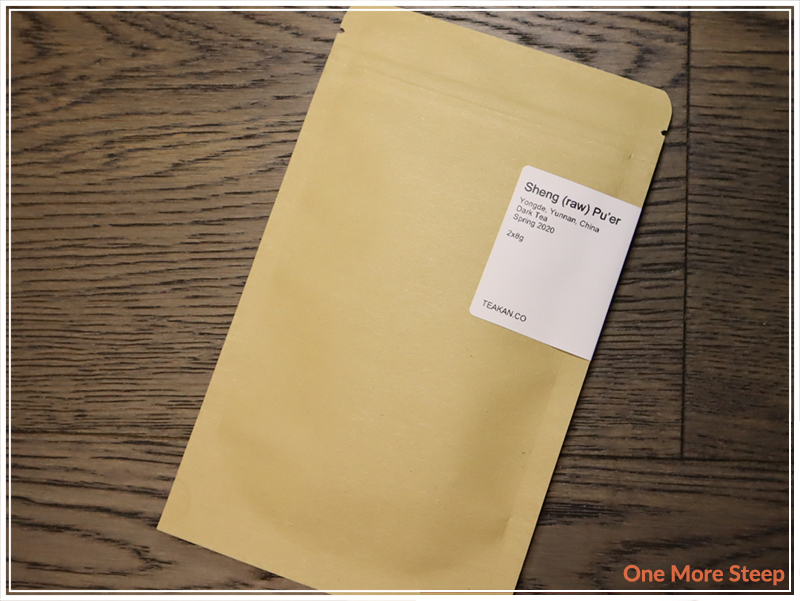 Sheng (raw) Pu’er comes in a sealed, resealable kraft paper pouch. There is that familiar labelling from Teakan, and I’m sad that this is the last of the teas from Volume 3 for me to review. I saved the pu’erh for last because I find pu’erh teas to be the most intimidating. I know a lot of people either really love or really dislike pu’erh and I’m one of those people who sort of falls in the middle. I love some pu’erh, and think others are kind of awful and lead to a terrible taste in my mouth. 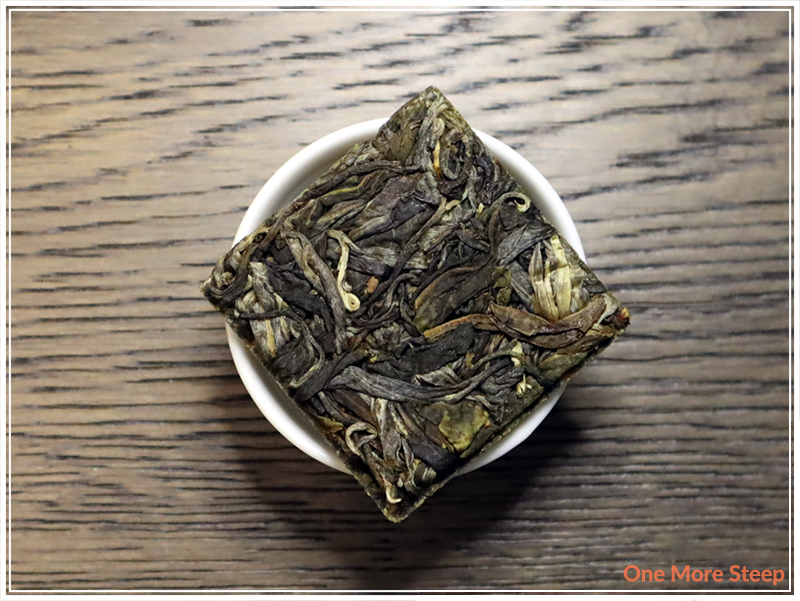 Sheng Pu’er comes in a flat square puck. The colouring of the leaves is quite pretty  – there’s a huge variation in colour from pale cream to greens and browns. It’s honestly really quite nice to look at. Sheng Pu’er is from Yongde, Yunnan, China and was harvested in spring 2020 – so it hasn’t had a very long time to age. The tea itself has a very strong aroma to it – it reminds me a lot of dark green leafy vegetables (think gailan, broccoli, brussel sprouts).

Sheng Pu’er initially steeps to a nice yellow colour. It has a strong aroma that is earthy, floral, and still reminding me of dark green leafy vegetables. The flavour is surprisingly floral, with an earthy/mushroom-y flavour to it. There is an interesting mouthfeel to it, it’s full-bodied, with an almost drying texture in my mouth. The tea itself has a bit of an astringency that lasts from mid sip to the aftertaste. The mild umami notes from the mushroom notes really give it a savoury kick. 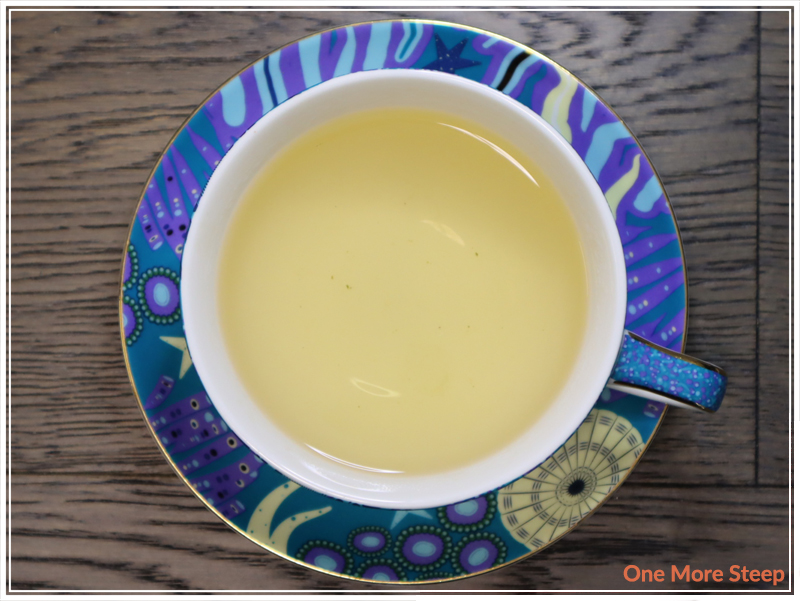 I resteeped Sheng Pu’er five times, adding an additional 30 seconds for each subsequent steep. The colouring of the tea itself got darker, becoming a deep, almost brownish orange. The flavour of Sheng Pu’er gets more earthy and vegetal, and less floral. That astringency I found in the initial steep continues throughout and doesn’t put me off (surprisingly). 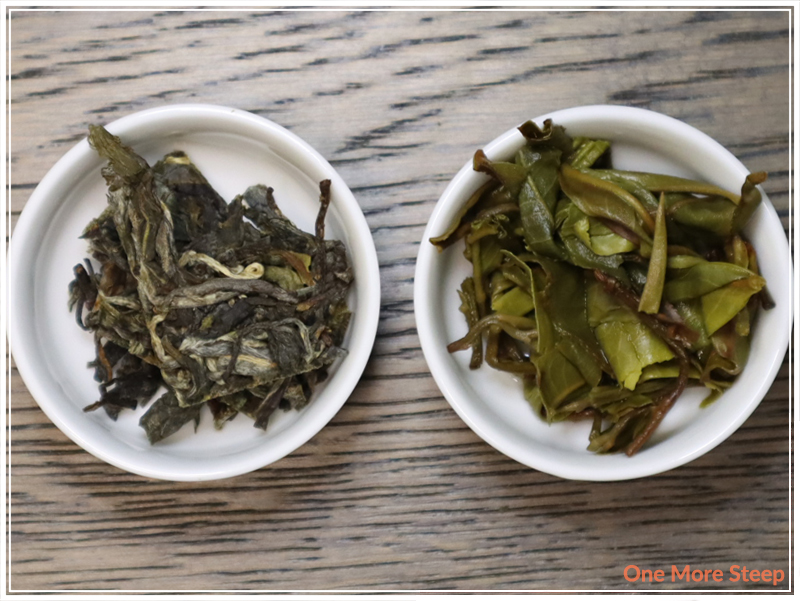 I liked Teakan’s Sheng Pu’er. I’m not a huge pu’erh tea drinker – and this is something that I completely own up to. That said, I did enjoy drinking Sheng Pu’er and the ability to resteep it and taste it as it subtly shifts in flavour was a real treat. I don’t think it’s one that I’ll have stocked in the tea stash, if only because pu’erh isn’t something that I routinely reach for (maybe that’ll change one day, and then I’ll be kicking myself for not having more of it). 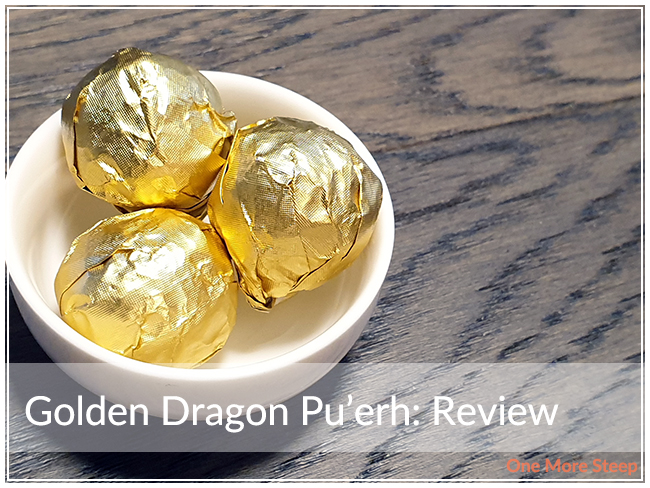 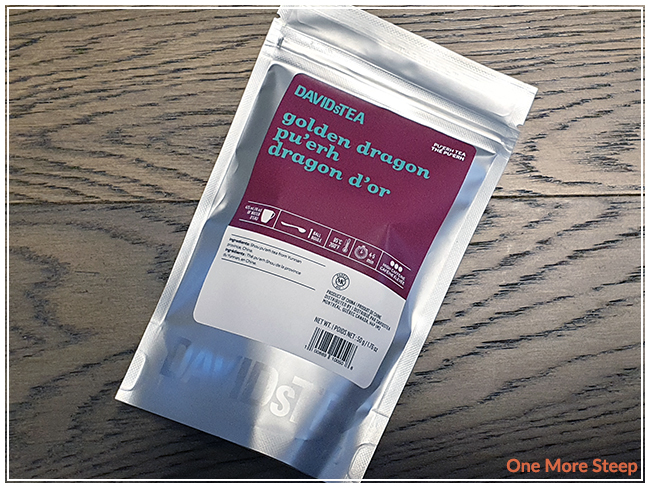 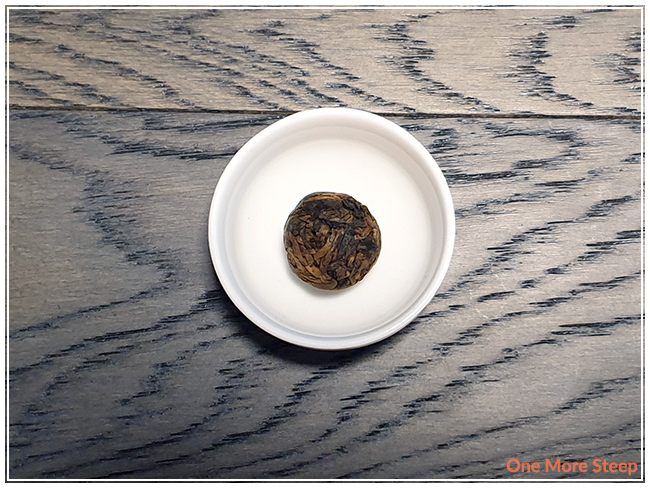 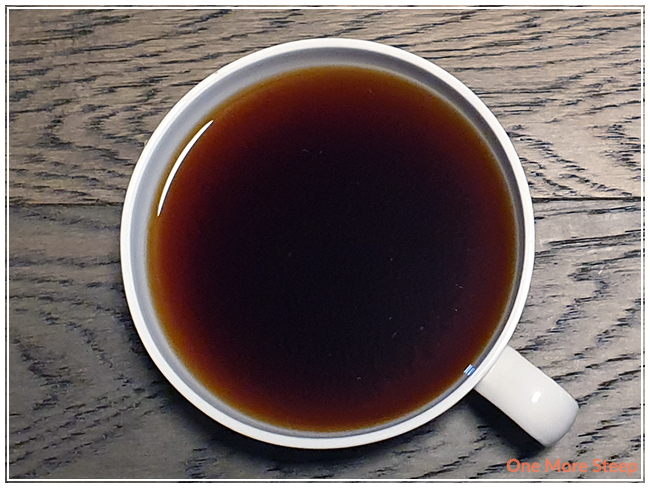 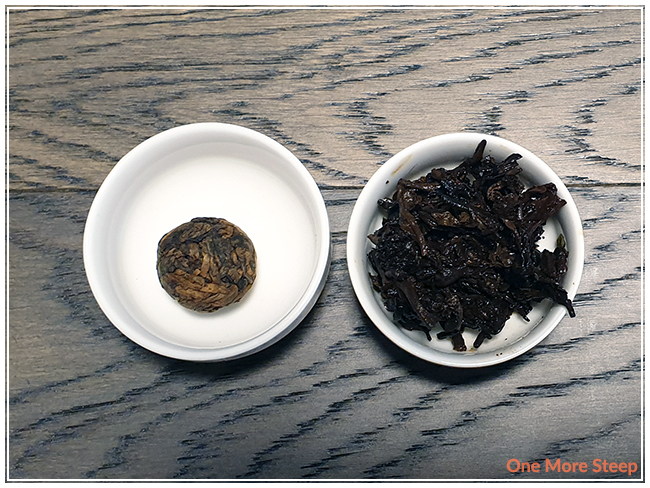 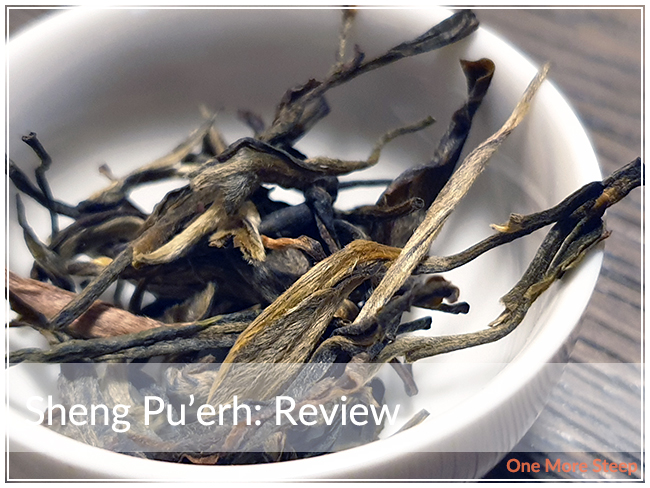 Sheng Pu’erh is not a tea that I would have necessarily picked out for myself a few years ago, but 2020 is a year of confusion, mystery, and Michelle trying new things. Because why not? Sheng Pu’erh comes in a very familiar silver pouch from DavidsTea – sealed and resealable. It is a larger bag than you’ll usually find 50g of tea in, which lends me to believe that it’ll be an airy tea and just a very ‘light’ tea overall. 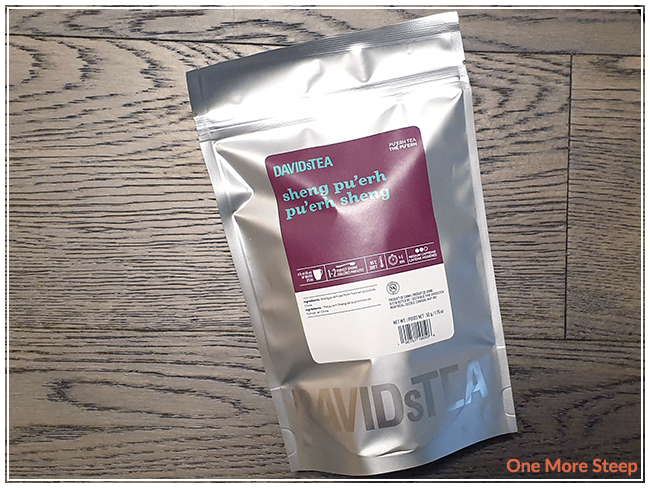 The leaves of Sheng Pu’erh are lightly twisted and have a range of colours from dark brown to a reddish brown colour to even a cream colour for the leaves that show some feathery bits to it. Sheng Pu’erh consists only of sheng pu’erh tea from Yunnan Province, China. The aroma is a mix of earthy and roasted nuttiness. I found out from the DavidsTea website that their Sheng Pu’erh is only a year old, so there’s still room for improvement on the tea itself if you allow it to age.

For those new to pu’erh, there’s two basic types: sheng and shou. Sheng is raw while shou is ripe – sheng is less processed and shou is more processed. I’m still not too familiar to the ins and outs of pu’erh tea and I don’t even remotely pretend to be an expert on it – but I’m in the process of learning! More on that later… 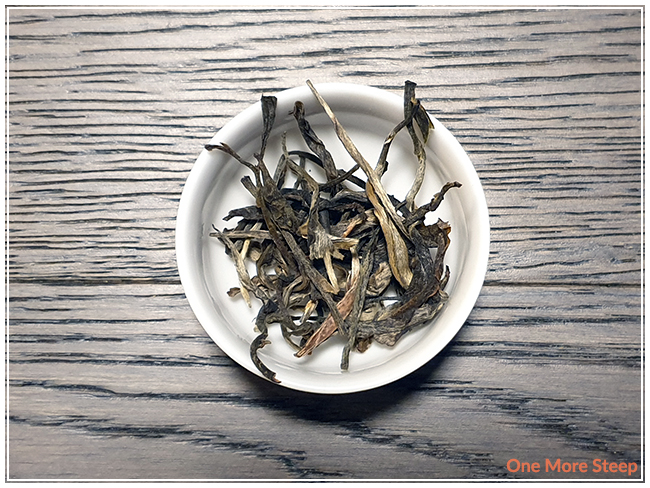 DavidsTea recommends steeping Sheng Pu’erh in 95°C (200°F) water for 4 to 5 minutes. I opted to do a quick rinse of the leaves first with the same temperature water before doing a steep time of 4 minutes.

A quick rinse is just like it sounds: pour the heated water over the leaves in the tea pot, and immediately pour it out before it really gets a chance to steep. Then continue the steeping process as normal. Rinsing helps to ‘wake up’ pu’erh tea leaves a little bit, and is a common technique when starting a steep of pu’erh leaves.

Sheng Pu’erh steeps to a light golden yellow. The aroma is slightly smoky, earthy, and something that reminds me of mushrooms. It has a nice slightly thickened texture, and is a smooth sip. The flavour stays the same throughout the sip, and it just has a bit of a gentle mouthfeel that allows the flavour to coat in the inside of your mouth without an lingering aftertaste. 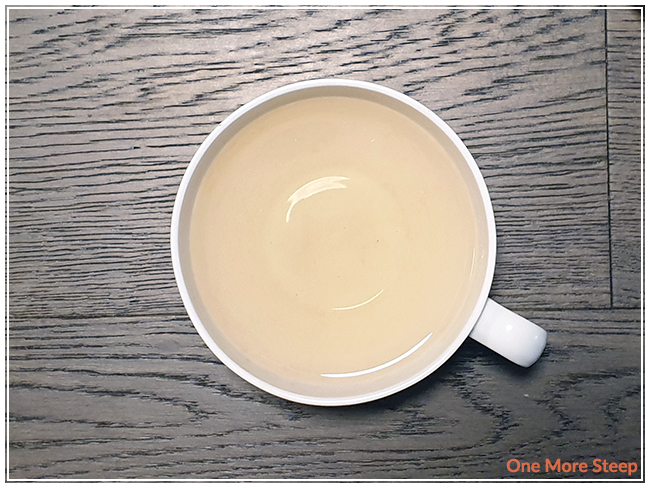 I resteeped Sheng Pu’erh four times (five steeps total), and added an additional 30 seconds for each subsequent steep. The leaves really opened up from the dried state and you can see the texture in the full leaves after they opened up after all the steeps. The flavour does deepen as you go and remains fairly faithful to the initial steep. It does get a bit more earthy and the smoky notes lessen with the subsequent steeps. 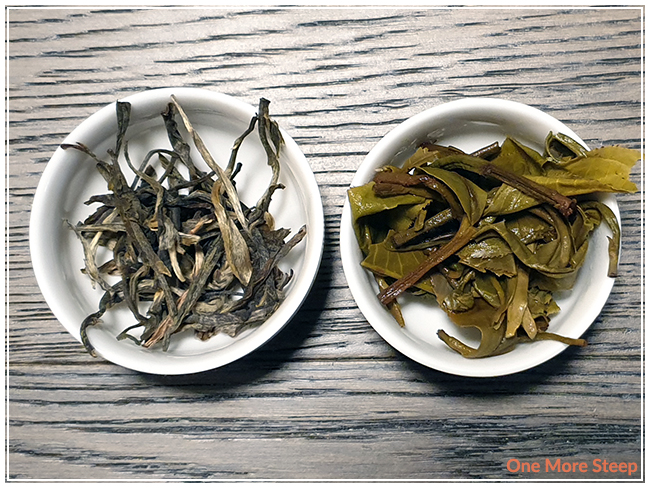 I loved DavidsTea’s Sheng Pu’erh. I found it to be a very pleasant cup of tea, and it really reminds me of a pu’erh that you might get with dimsum at a restaurant (I miss dimsum!). There’s a nice earthiness to it that isn’t overpoweringly robust, and the texture of the tea is just smooth. I would liken this to being a good introductory pu’erh because it’s not over the top in flavour, but it doesn’t lack in flavour either. There’s nothing particularly offensive about it, which I can sometimes find fault in for other pu’erh teas, but just makes for a decent, standard cup of pu’erh (which isn’t to say that as a bad thing, but it makes a nice introduction, and I kind of wish that this had been one of my introductory pu’erh teas myself when I first started branching out).

Treats pair well with tea! I personally like to pa