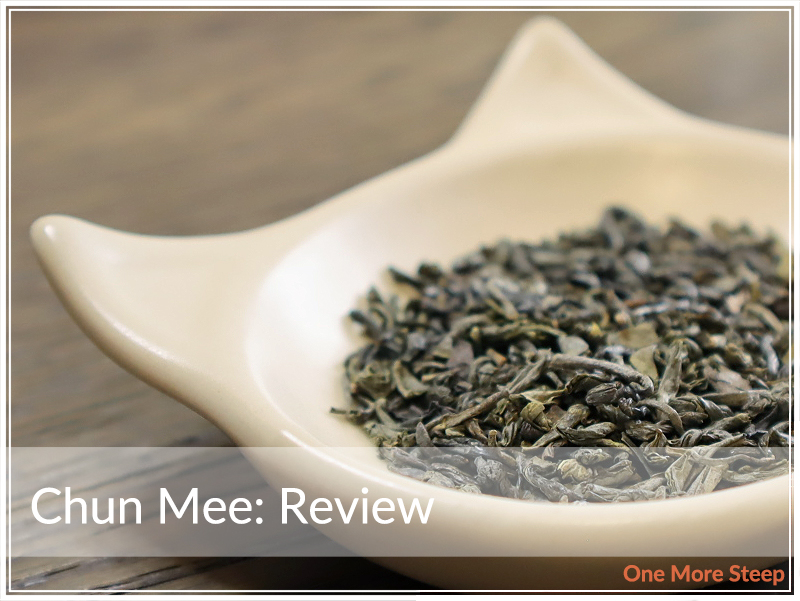 This Chinese green tea was another recommended tea to me when I inquired about green teas while shopping. Chun Mee literally translates to precious eyebrows, presumably because of the shape of how the leaves are rolled and twisted up. It’s described as generally being a bit dusty, and more acidic compared to other Chinese green teas. Chun Mee originates in Jiangxi Province, China, but is now growth elsewhere. Just fun facts to share! 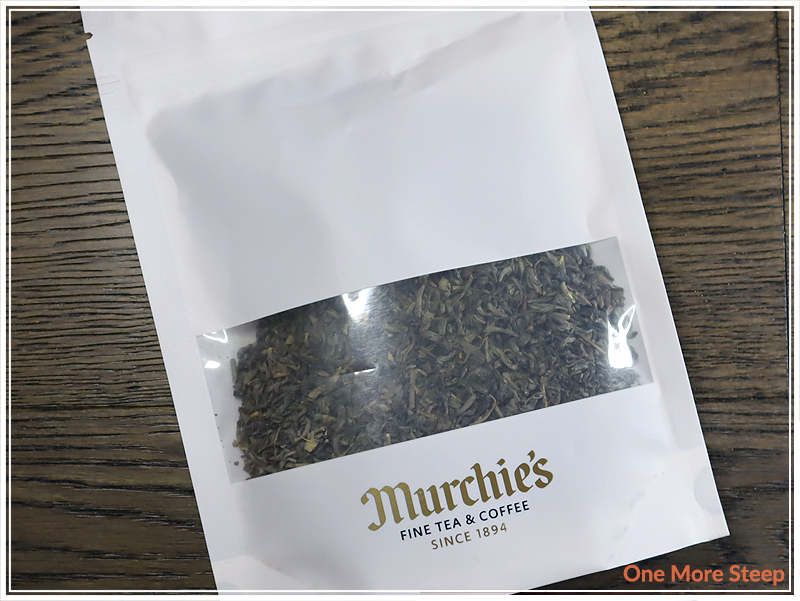 Chun Mee consists of Chinese green tea. It has a bit of a dustiness to it, with a strong grassy note and hints of plum. The light fragrance of stone fruit is pleasant. The leaves themselves are tightly rolled, and appear short. I don’t particularly think that the leaves look much like eyebrows, but to each their own. 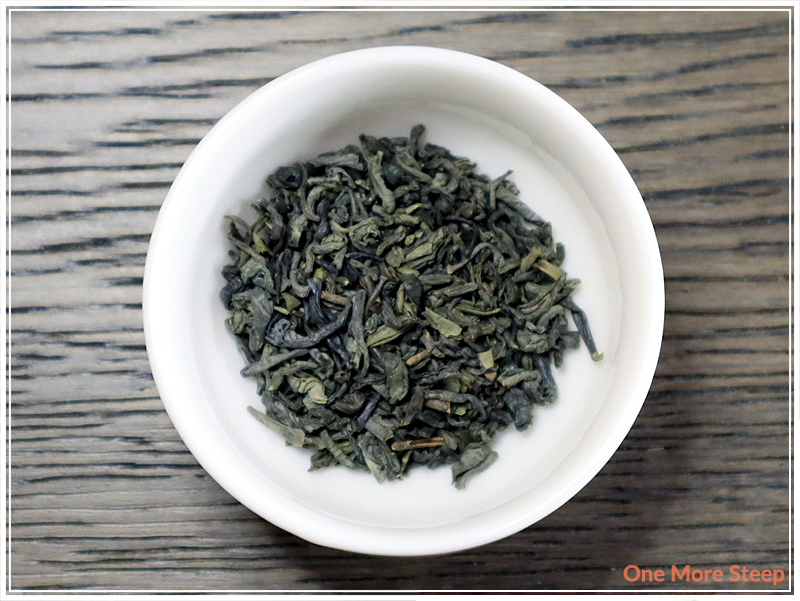 Chun Mee steeps to a sunshine yellow – just check out that colour! It has a surprisingly mild aroma to it, Chun Mee has a primarily grassy note to it. On first sip, I noticed the grassy notes, but also some fruity sweetness to it that reminds me of plums. There’s something about the stone fruit quality to the flavour – it’s not tart, but is sweet, and has a heavy syrup texture to it that lingers on the tongue. The lack of astringency is welcome, but I do find that Chun Mee has something interesting about the mouthfeel that makes it almost feel astringent but doesn’t have a mouth puckering quality to it. 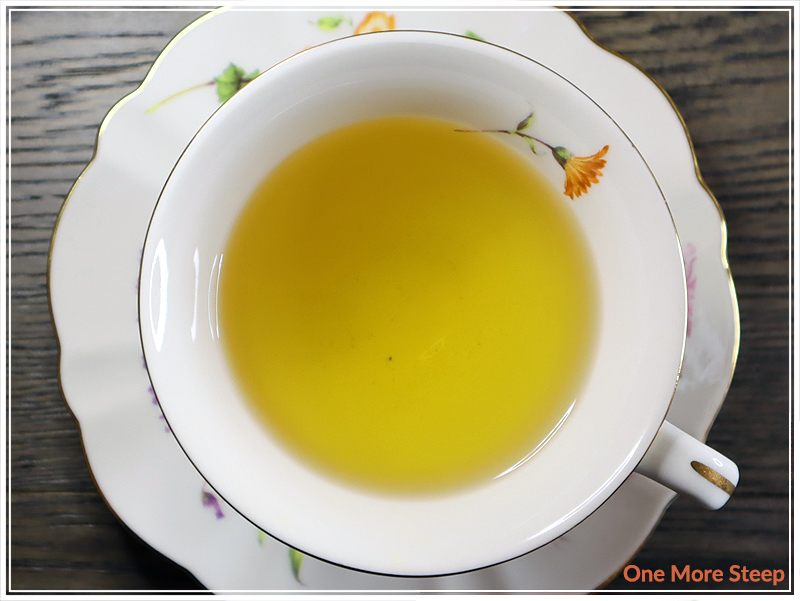 I resteeped Chun Mee a total of five times (six steeps total with the same leaves), and added an additional 30 seconds for each subsequent steep. The colour of the liquor got darker, while the flavour profile stayed fairly consistent with each steep of the leaves. I found that it got a bit sweeter with each steep of Chun Mee. 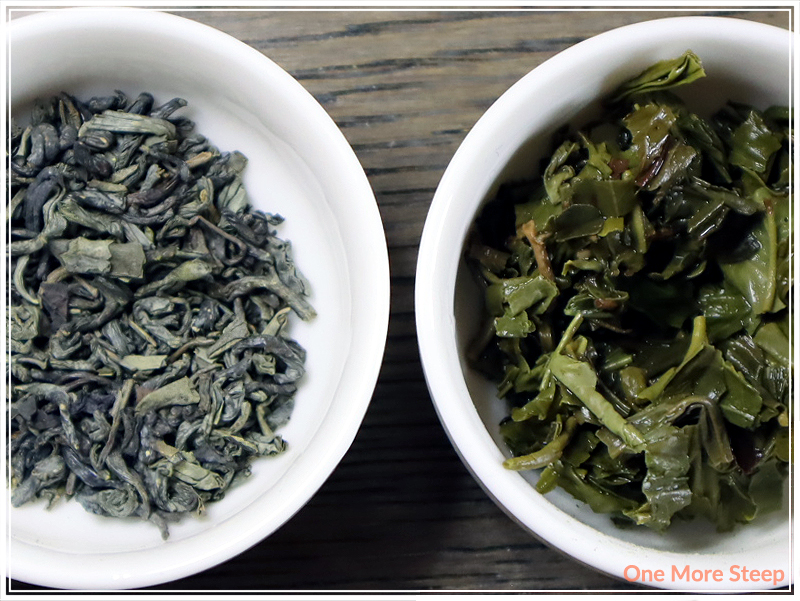 I liked Murchie’s Chun Mee. I thought it was an enjoyable green tea, with some lovely plum and grassy notes to the flavour profile. The mouthfeel wasn’t the most enjoyable thing for me – there was something about the way that Chun Mee made the inside of my mouth feel that wasn’t drying, but felt like it should have been. I think the plum flavour was great though, and would consider cold steeping this one in the spring or summer for some iced green tea for sure – perhaps even coupling it with plums and a simple syrup. 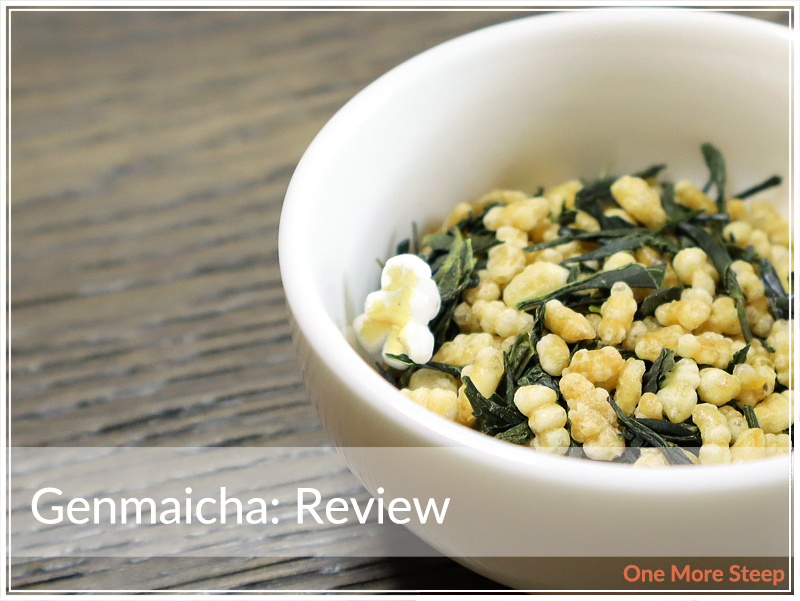 Genmaicha was a purchase from a Murchie’s retail location, being packaged in a white pouch that’s resealable. Genmaicha is a Japanese green tea, with puffed rice mixed in. The tea itself was originally stored in a large tin on their shelf, and I got the opportunity to see the leaves before deciding to purchase. The buying experience was fun, the workers were able to make some recommendations on teas to try after I said I wanted to try green teas. 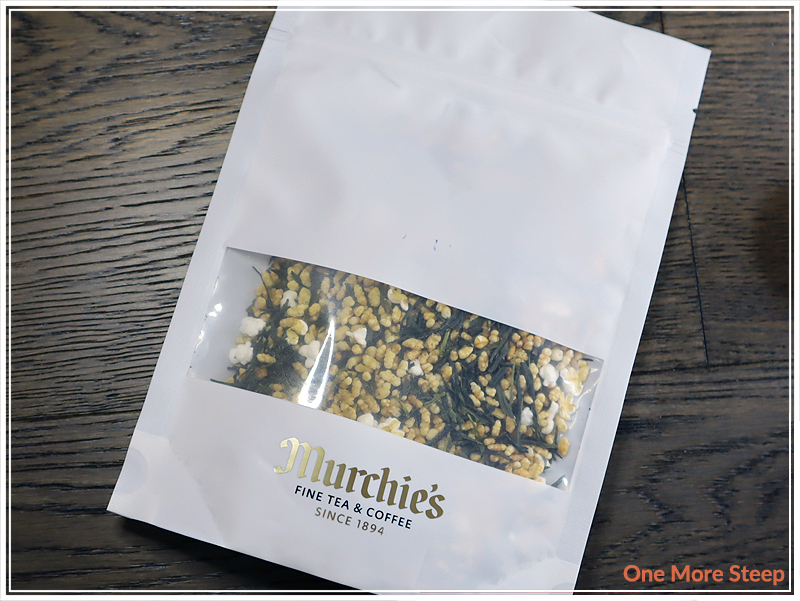 Genmaicha consists of green tea and puffed rice. It smells like rice krispies cereal or popcorn, with hints of grassy notes throughout. And just look at the pretty puffed rice! It’s a pretty tea, and a nice one to inhale the aroma of. Genmaicha usually has a pretty bright aroma, so this one is in line with other genmaicha that I’ve had the opportunity to try before. 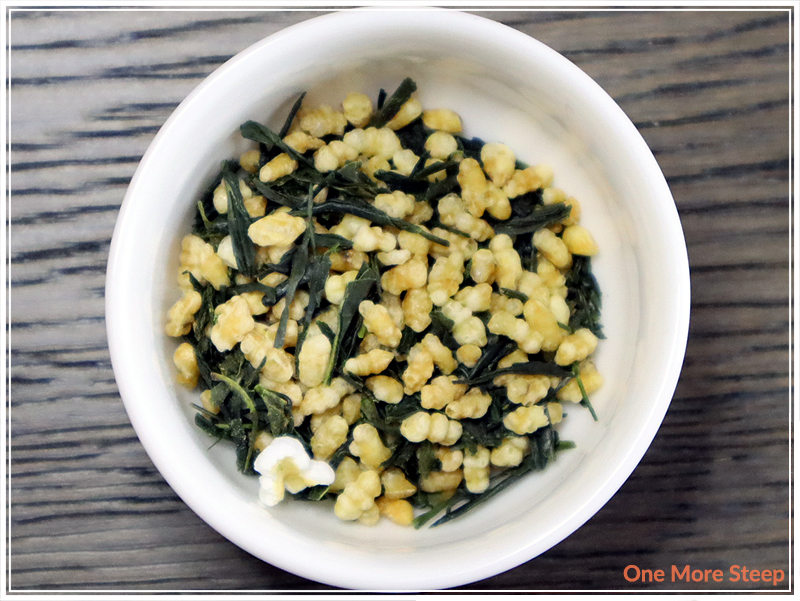 Genmaicha steeps to a bright yellow, with a toasted popcorn aroma to it. The flavour is a mix of popcorn and the umami from the green tea base. It plays well on the tongue, with hints of saltiness that balances well with the puffed rice flavour that reminds me so much of popcorn. It definitely has a bit of savoury flavour profile to it, which I find pleasant. 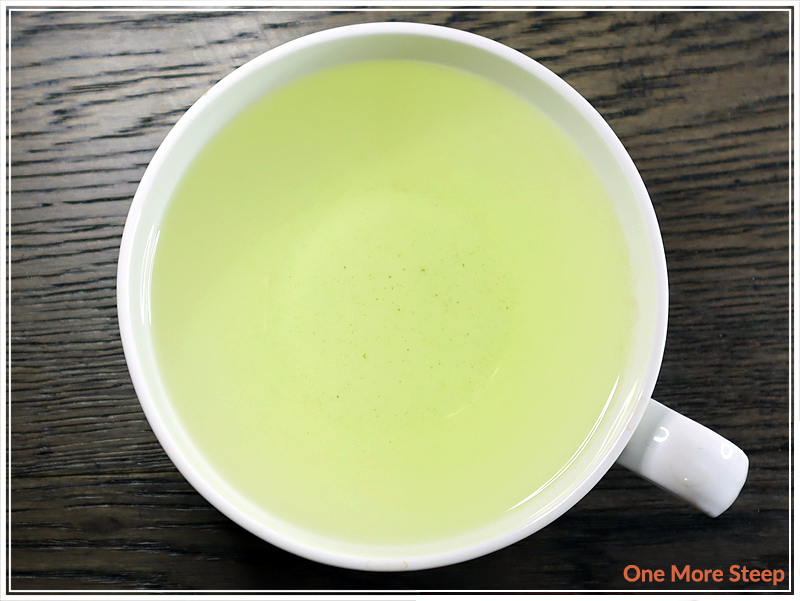 I resteeped Genmaicha six times (seven steeps total), adding an additional 30 seconds for each subsequent steep. Genmaicha holds up quite well to being resteeped and the flavour profile remains consistent for each steep, just waning in intensity of flavour by the last steep that I did. 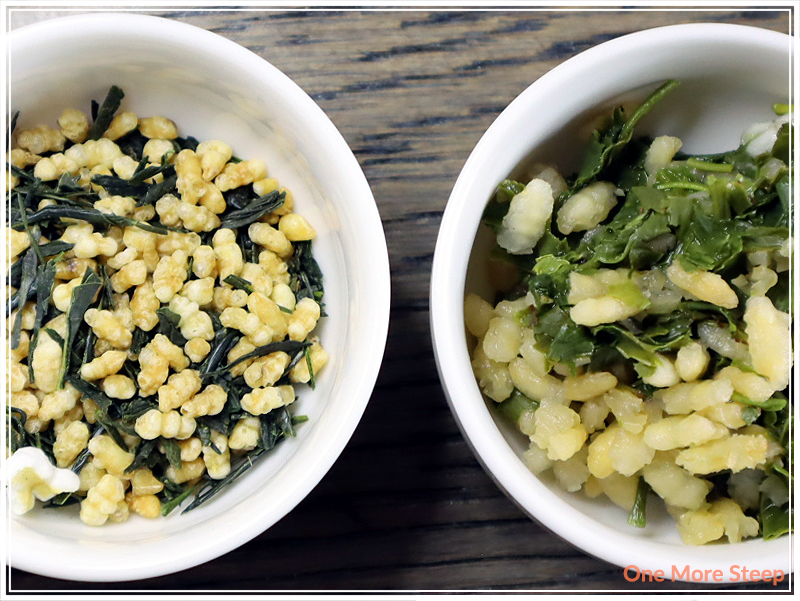 I loved Murchie’s Genmaicha. I enjoy a Japanese green tea from time to time, and found that this one from Murchie’s held up well to being steeped and resteeped over and over again. The flavour is exactly what I expect to find in a Genmaicha – with the puffed rice flavour, and the umami notes of the green tea base. I would highly recommend having Genamaicha with a meal, as the umami quality would balance well with something savoury. 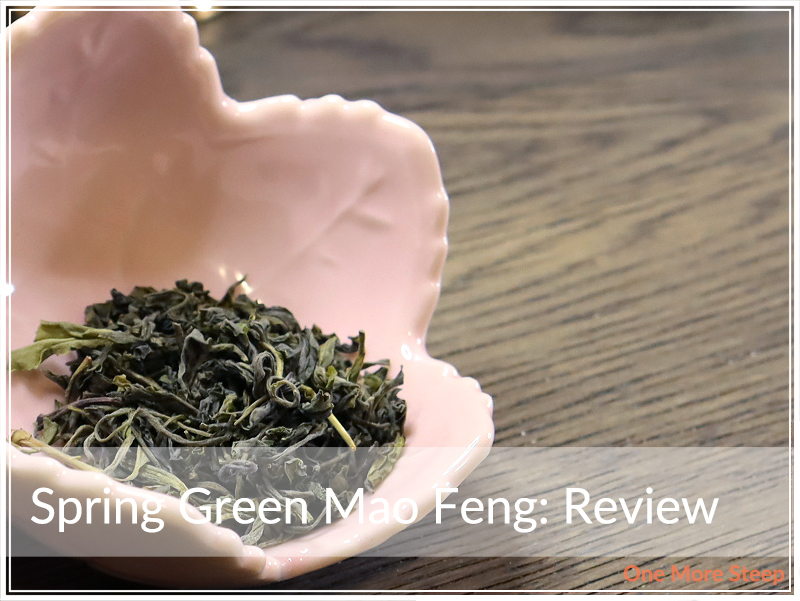 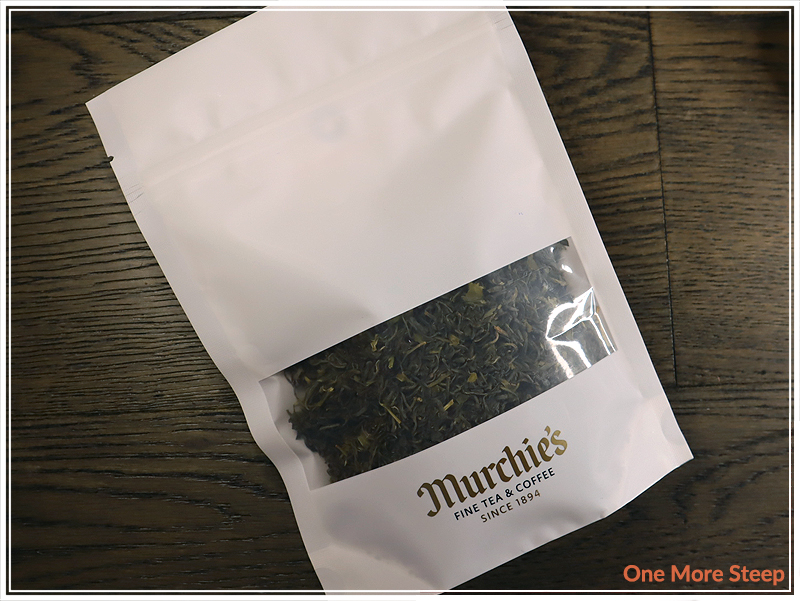 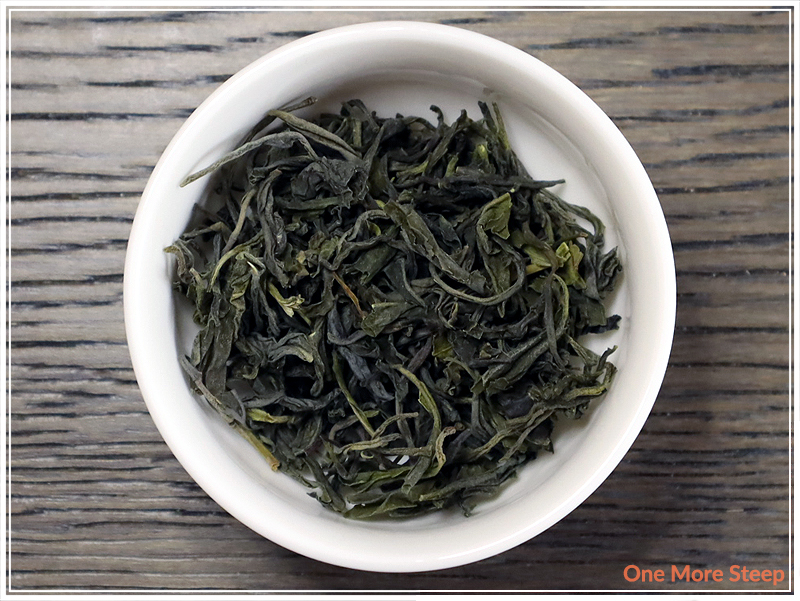 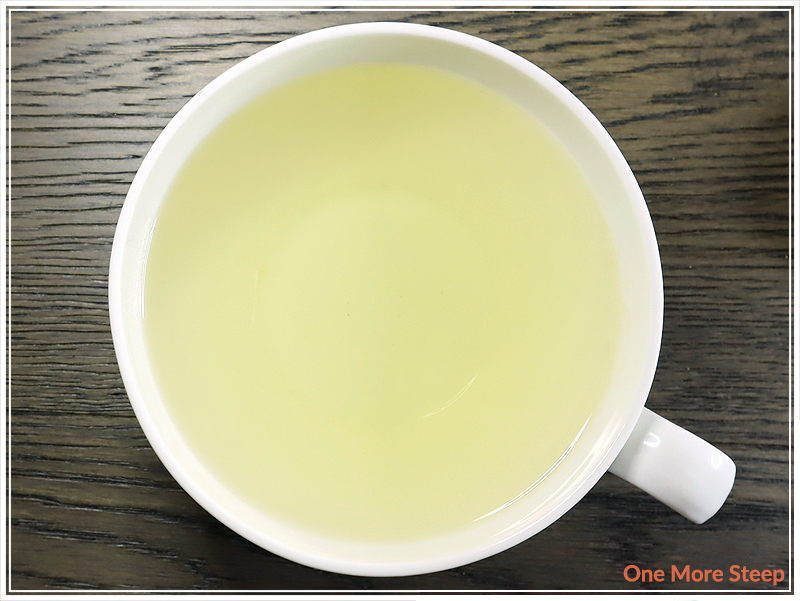 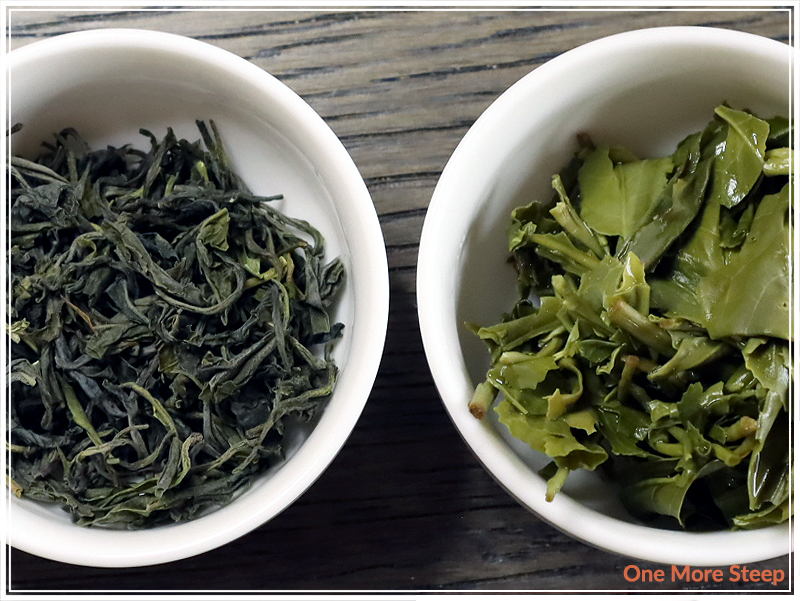