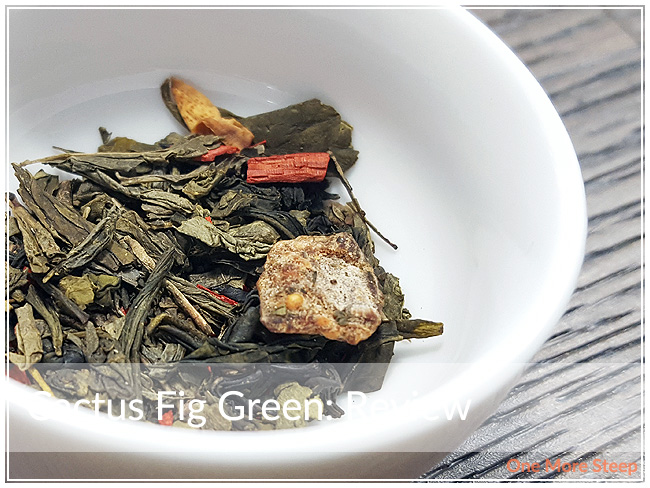 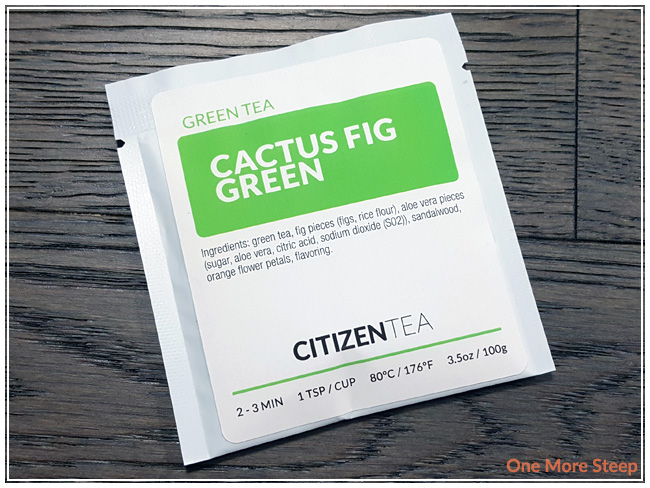 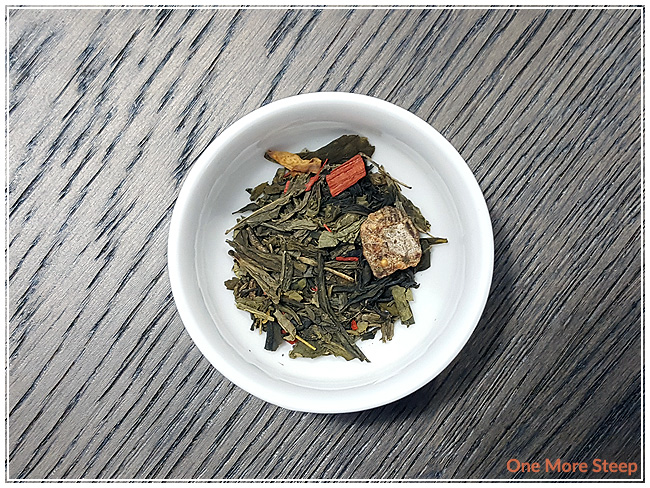 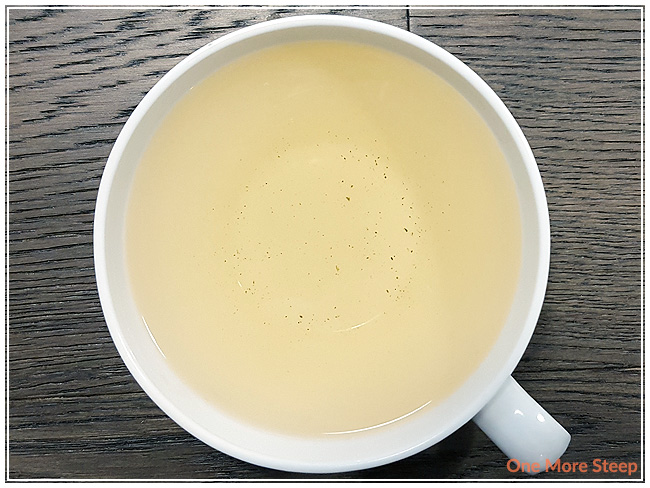 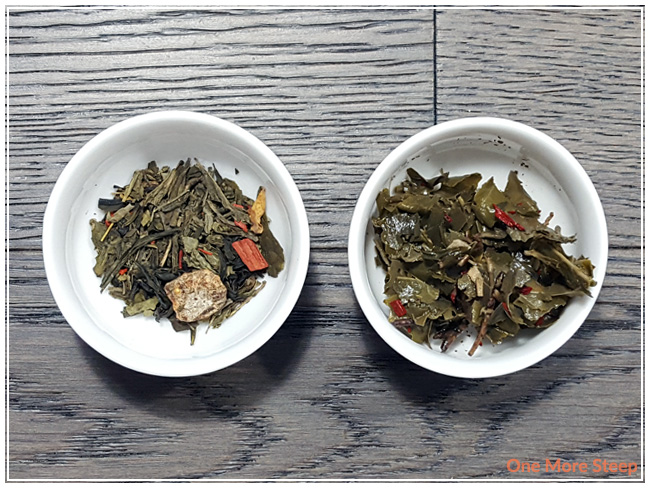 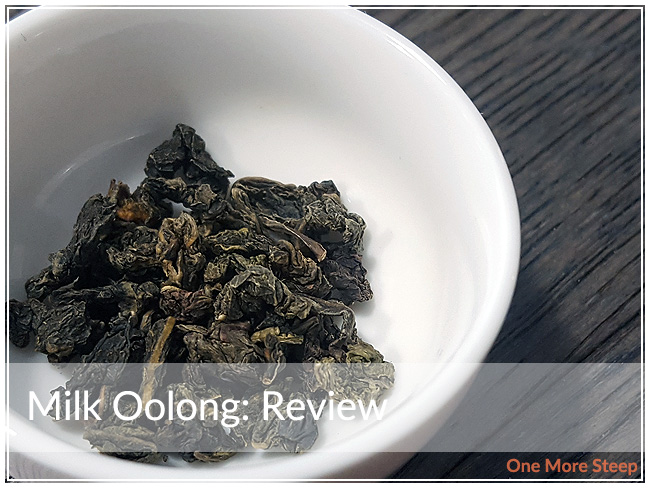 Citizen Tea has provided me with Milk Oolong for the purposes of providing an honest review. I received this product at no charge to me and received no other compensation.

I love a good oolong, so I was really excited that one of the teas that Citizen Tea sent me was their Milk Oolong. I’ve had a few milk oolongs in the past and I really love the creamy and buttery flavour that a lot of them have. When I opened up this sample packet, I smelled a floral fragrance first followed by a scent that reminds me a lot of condensed milk. If you’ve never had condensed milk, it’s a sweetened and thickened milk that comes out of a can. It’s delicious, and it’s a bit of a treat to have (and so good – bad for me because I have an epic sweet tooth!). Sweet, floral, and milk scents. It’s an interesting combination because the floral aromatics are stronger than the milk fragrances, which I feel should be the opposite given that it is a milk oolong. 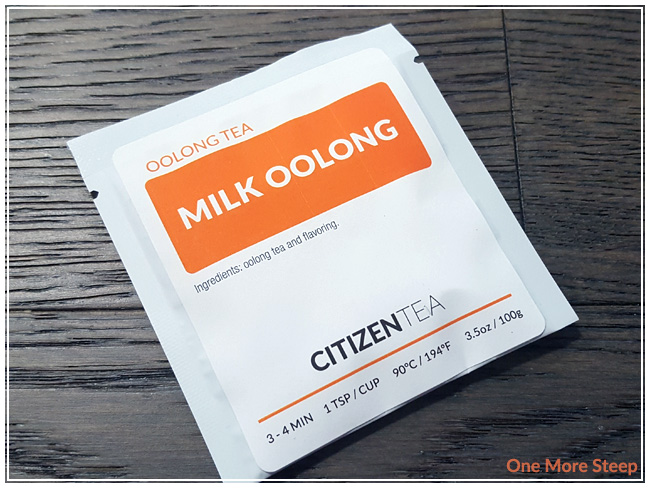 The ingredients in Milk Oolong are described as oolong tea and flavouring. Natural flavouring? Artificial flavouring? I do wish there was a bit more information about the flavouring that went into this tea. Naturally, I assume that it is some kind of milk/dairy flavouring. If I was lactose intolerant I would have steered clear of this one though, without more information. Thankfully, I am not so I went ahead with steeping this flavoured oolong. 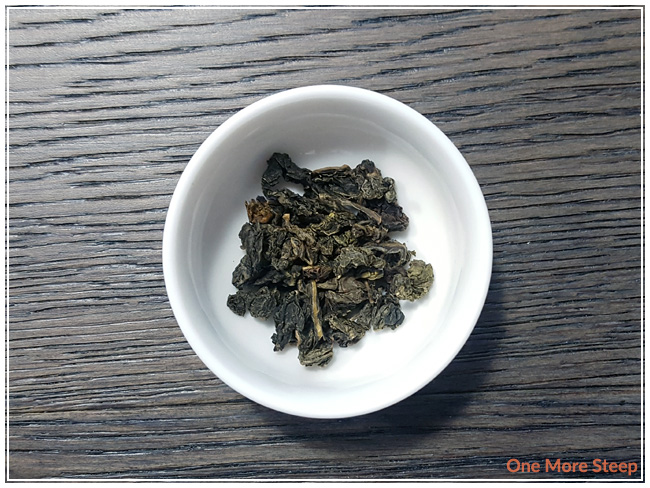 Citizen Tea recommends steeping Milk Oolong for 3 to 4 minutes in 90°C (194°F) water. I did my initial steep of Milk Oolong at 3 minutes.

Milk Oolong steeps to a pale yellow. I found that the dry tea aromatic mixture of floral and condensed milk followed through to the steeped tea. Surprisingly, it doesn’t taste as floral as it smells (a bonus since I wasn’t really expecting flowery notes in a milk oolong). The condensed milk flavours do carry over fairly well, and it has an aftertaste that reminds me of artificial sweeteners (like stevia). I’m not a huge fan of artificial sweeteners, as I prefer to add my own to teas, but it’s not incredibly off-putting. There is a bit of a buttery cream quality to this tea, although the taste of condensed milk does ring more true than a cream/buttery flavour. 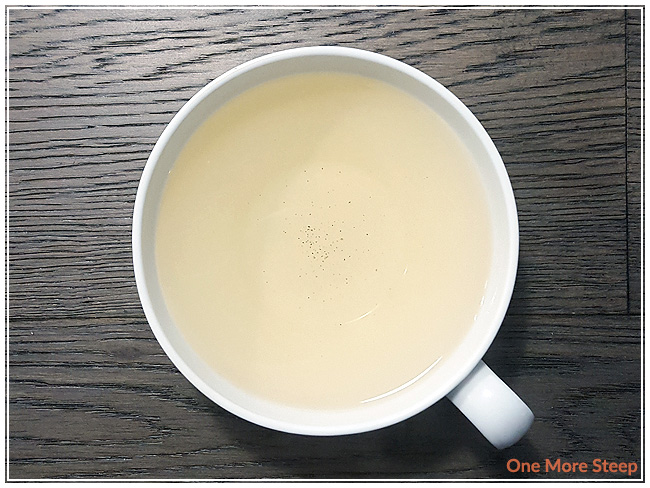 I resteeped Milk Oolong quite a few times (seven resteeps in total). I found that the flavour of this oolong drastically improved by the second resteep (third overall steep). The artificial sweetener aftertaste was gone, and the flavours were more in line with what I expect in a milk oolong (buttery, cream, mild sweetness). The floral fragrance became a distant memory, and I found that the straight milk flavours gave way to the buttery goodness. 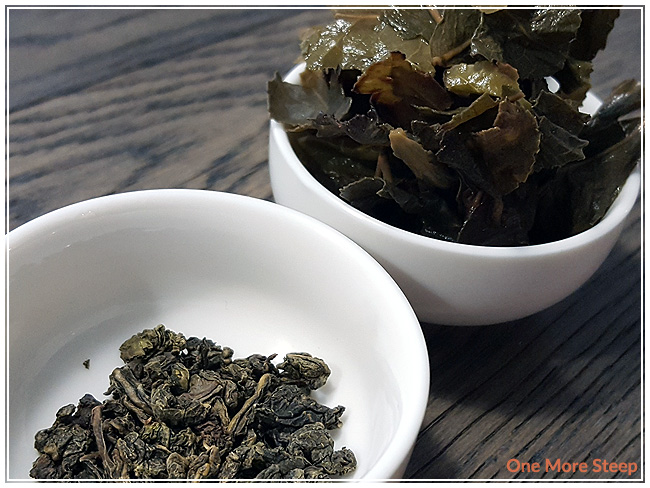 I liked Citizen Tea’s Milk Oolong. I was not a huge fan of the first two steeps that I did of this tea – there was too much artificial sweetener taste, and the floral aromatics of the dry leaf weren’t appealing to me. However, once I steeped the leaves a couple of times, the flavours began to change to what I was looking for in a milk oolong – butter and cream. If you’re not into the artificial sweeteners, I would recommend steeping (and pouring out) the first two steeps of this oolong and then drinking the rest. Luckily, this tea resteeps very well (I did 8 steeps total with the same leaves), so there is still a lot of flavour left even if you discard the first two steeps. 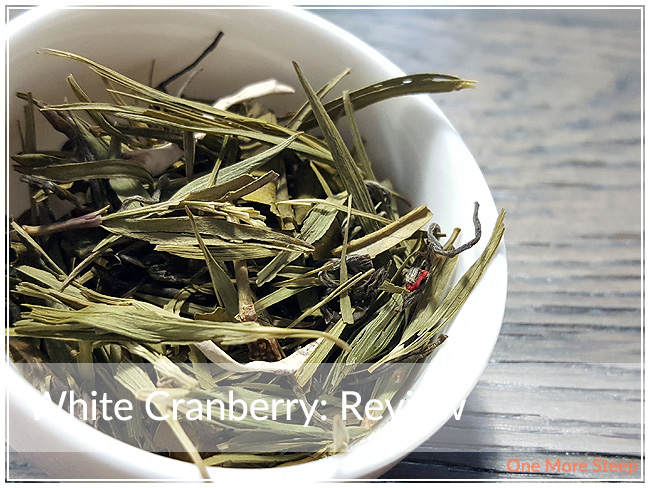 Citizen Tea has provided me with White Cranberry for the purposes of providing an honest review. I received this product at no charge to me and received no other compensation.

This is the first of a few reviews from Citizen Tea, which I was really excited to receive in the mail. White Cranberry was the first I tried because I was feeling like having something light – which I typically find white teas to be light. This white tea blend consists of: white tea, bamboo leaves, snow white tea, pomegranate leaves, and flavouring. 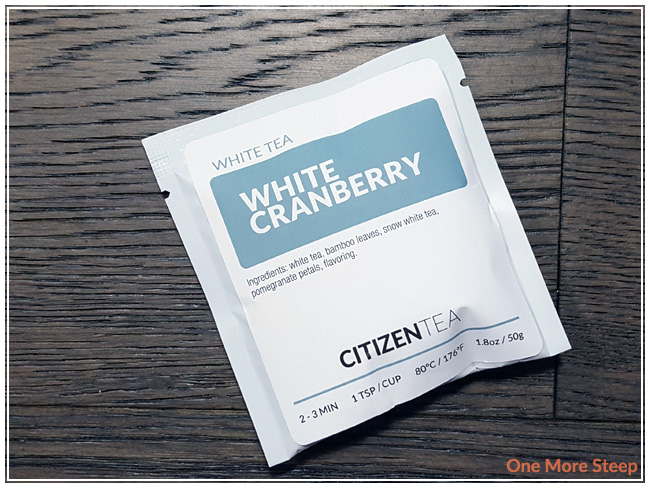 The description of this tea on Citizen Tea’s website states that there are cranberry blossoms in it somewhere (perhaps that is in the flavouring?). This tea smells amazing, I’m not going to lie. It has a very bright, fruity smell to it. The smell reminds me exactly of dried sweetened cranberries – do you know what craisins smell like? It’s just like that, and I love craisins so it’s a great smell to me. 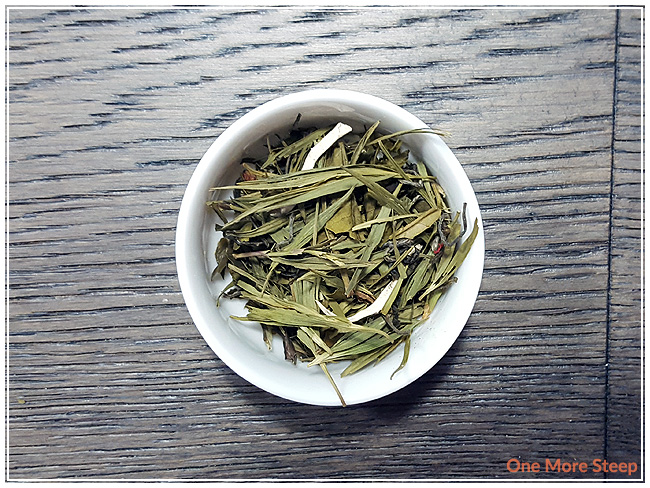 Citizen Tea recommends steeping this white tea blend in 80°C (176°F) water for 2-3 minutes. The initial steep I did of White Cranberry was for 2 minutes in 175°F water, because that is the white tea setting on my Breville IQ Kettle.

White Cranberry steeps to a lovely yellow colour, it smells strongly of cranberries. On first taste, the flavour of the tea is muted compared to the fragrance of the steeped tea. I find that the tea has a mild sweetness, even though it does smell a lot steeper than it actually is. The white tea base isn’t overpowered by the fruity taste. I do think it tastes like cranberries, with a hint of something else that reminds me a bit of raspberries. I find the tea itself to be smooth and free of bitterness. It’s enjoyable, and two minutes was a good length of tea time. 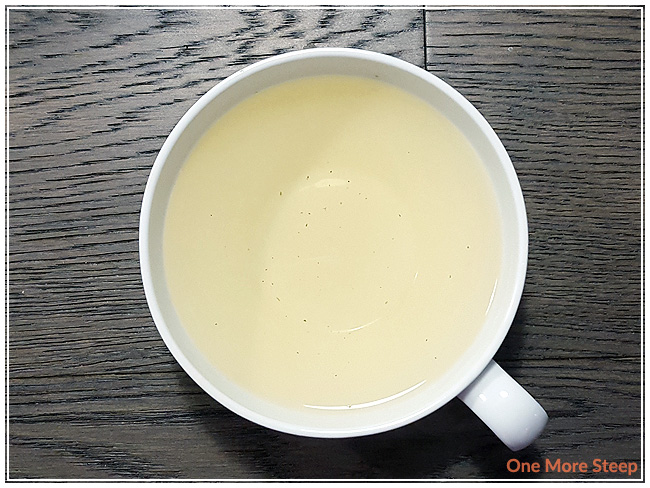 I steeped White Cranberry a second time (for 2 minutes 30 seconds) and I found the colour was signficiantly lighter. The taste of this white tea blend was considerably more tea base and less cranberry. The base itself is delicious – it has a very mild sweetness with light vegetal taste to it. I was a bit disappointed by the lack of berry flavours the second time around, but it was a bit of a treat to be exposed to the white tea base in this blend. 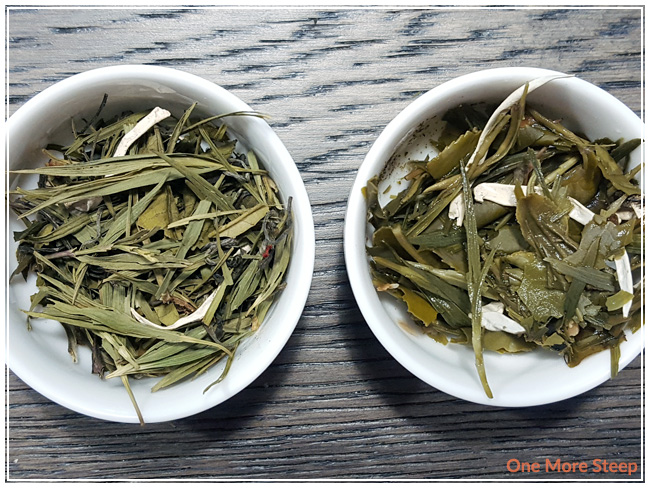 I liked Citizen Tea’s White Cranberry. I really liked it during the first steep – the fruity taste of the cranberries in this white tea blend is delicious. I think it smells really good (both dry leaf and steeped), but I do wish that it resteeped a little bit better. That said, the price of this tea quite reasonable for a white tea blend. I find white teas are generally more expensive, and the price point of this tea (and others) on the Citizen Tea website are quite competitive. I think White Cranberry works really well for the first steep, if you’re in love with the fruity taste. The second steep is a good experience with the white tea, I just wish that the cranberry taste carried over better – but both steeps are good.