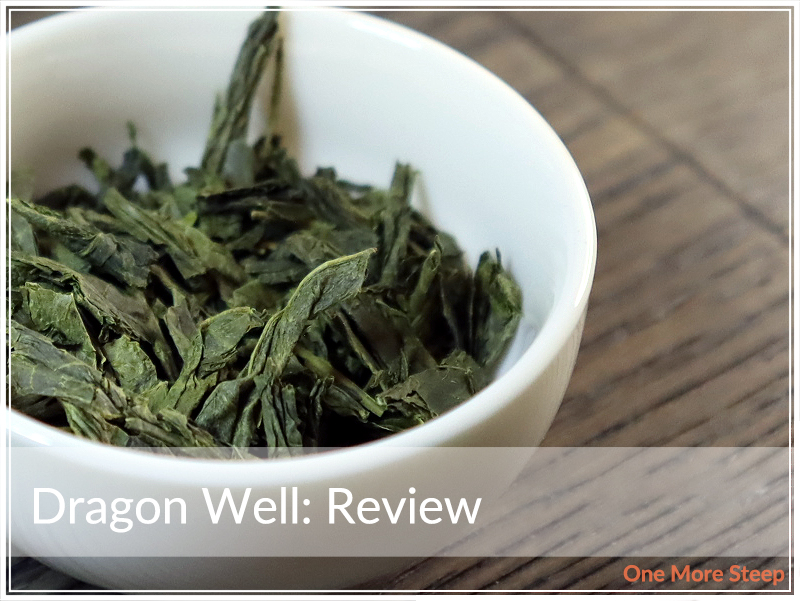 DMDQ’s Dragon Well came in a cardstock carton that’s taped closed. Inside, is a vacuum sealed foil package of 200g of tea. The foil packet itself is tightly bunched up, because of the sealing method. Dragon Well comes from China, but there’s little other information on the packaging in regards to where specifically. 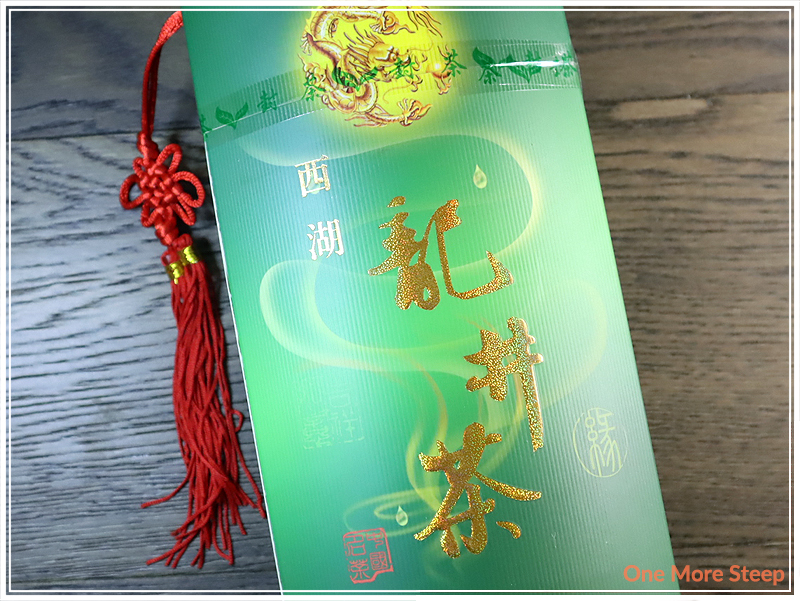 That said, Dragon Well is a classic Chinese green tea. I’ve reviewed multiple dragonwell teas before (it’s also known as Long Jing), and I really bought this because it was a great deal in terms of dollar per gram (3.6¢ per gram) and wanted to know if it would be a potential tea cupboard staple because I really enjoy drinking dragonwell, but also like saving money if I can. The leaves themselves are flat, long-ish. I found that a lot of leaves aren’t full pieces, I found a lot of broken leaf pieces in the spoonful that I got out of the packet. The colour is green, a mix of mid to dark greens with a dusty texture to the leaves. It does have a grassy smell that I’ve come to anticipate when it comes to Chinese green teas, so it does have the right aroma. 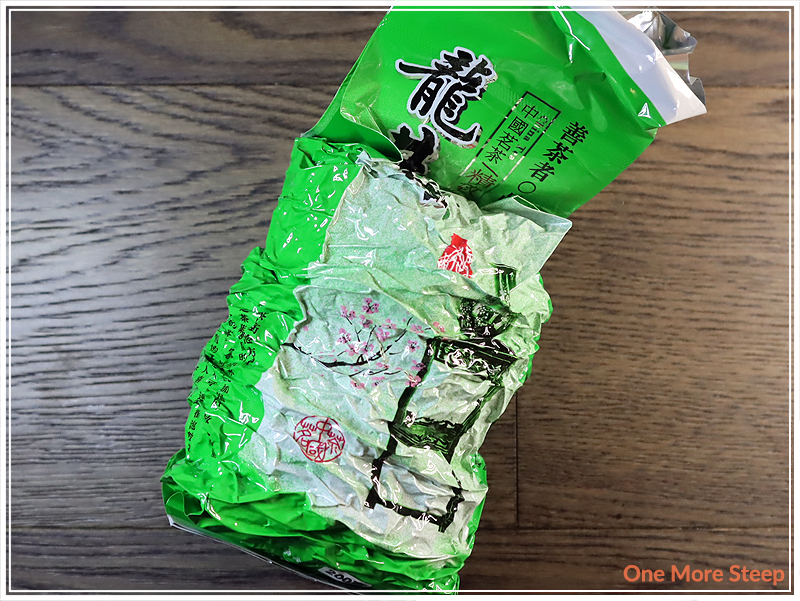 That said, I opted to use the green tea setting on my kettle (175°F/80°C) and did an initial steep of Dragon Well for 2 minutes. If you’re ever in a similar situation, you can check out my chart of tea steeping times and temperatures for a general steeping guide. 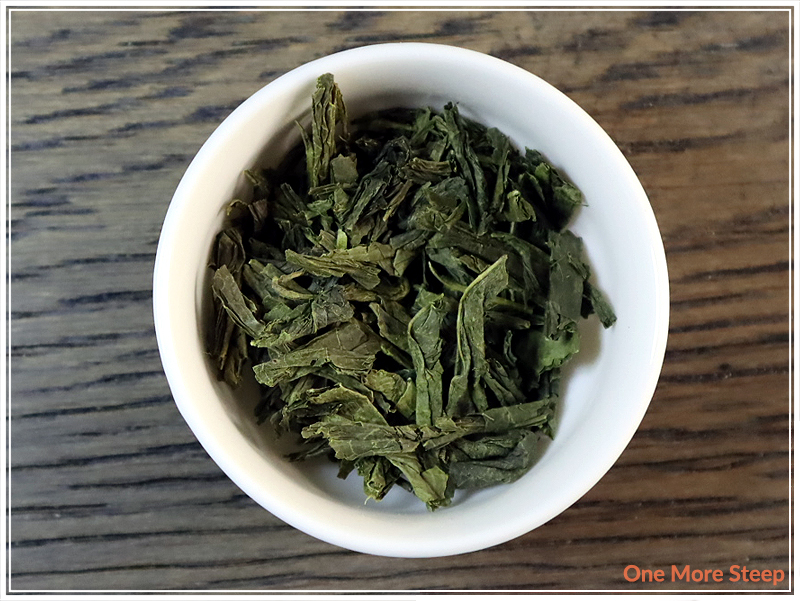 Dragon Well steeps to a green-yellow colour, and I found that there was a lot of dust that settled at the bottom of my tea cup. I wasn’t surprised, given at how dusty the tea leaves were before I had began to steep the Dragon Well. The aroma of the leaves is grassy, and just slightly sweet. I found the flavour of the Dragon Well to be sweet, grassy, and there’s a mild amount of umami in the background. There was no bitterness or astringency with the initial steep of 2 minutes. 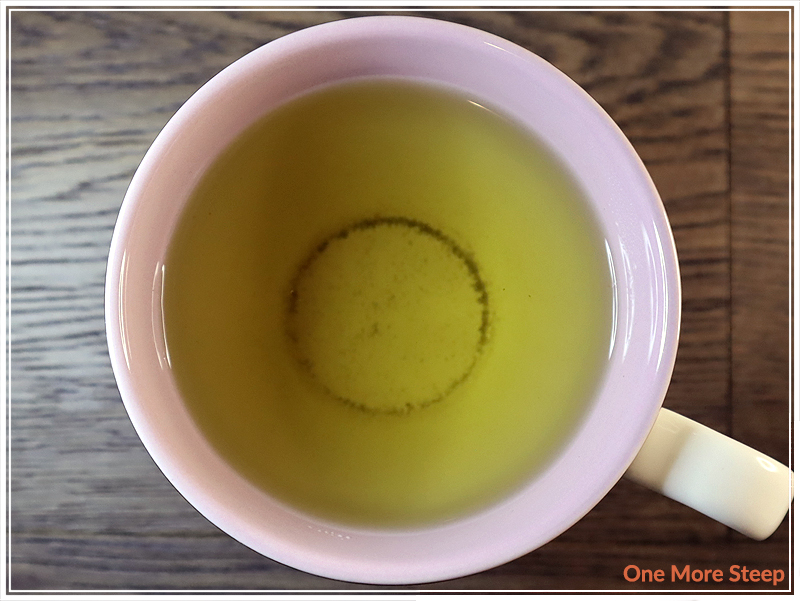 I resteeped Dragon Well twice, adding an additional 30 seconds to each subsequent steep. I found that the flavour stayed consistent and was just a bit weaker. The leaves themselves are, unsurprisingly, pieces of leaves rather than full leaves as I’m used to seeing in other long jing teas. 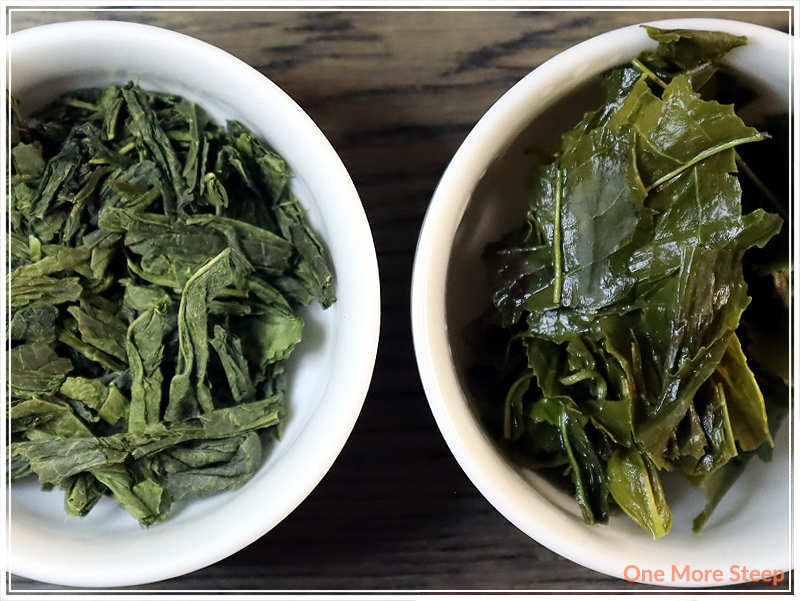 I liked DMDQ’s Dragon Well. I was mildly impressed at the flavour that these leaves were able to produce in my cup of tea. I had hoped that the tea would be a higher quality, but given the price I’m not terribly disappointed. That said, if you prefer a tea with less dust, then this isn’t the one for you. But as a lower priced Dragon Well, it certainly fits the bill for a green tea that I won’t mind sharing a lot or steeping large pitchers to have iced this summer. 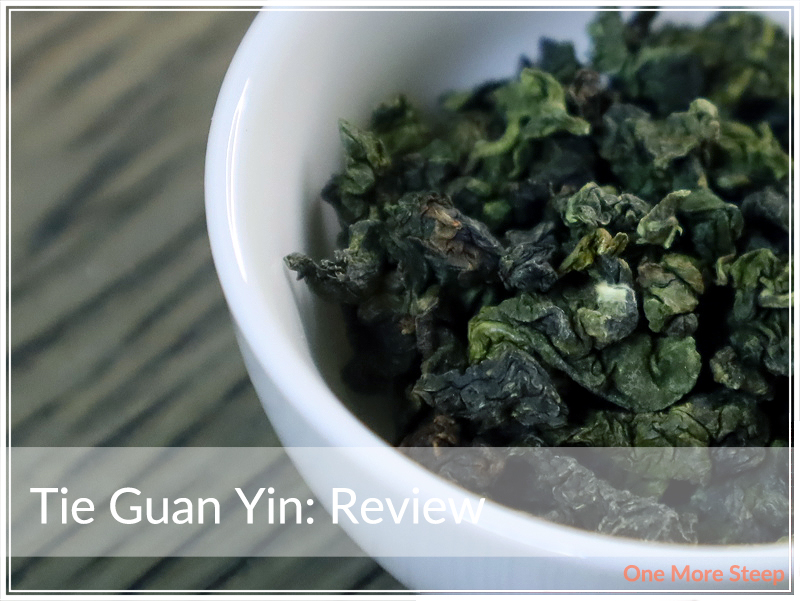 This Tie Guan Yin was one of those grocery store impulse buys from my favourite Asian grocery chain. The packaging caught my eye because of the decorative knot on the side. And for the low price of under $8 for 250g of oolong tea, it turned out to be an easy impulse buy. Plus, the packaging was nice. Sadly, there was no website or any other information. 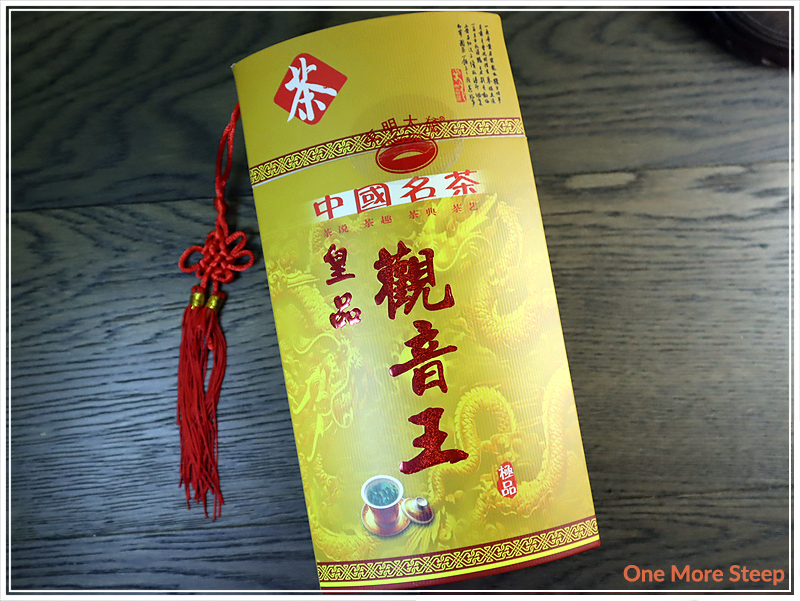 The tea itself comes a vacuum-sealed foil pouch that’s sealed (but not resealable), and came inside of the cardstock carton with the decorative knot on the side. There’s minimal English on the packaging, aside from what’s required. The ingredients are: tie guan yin oolong tea from China. 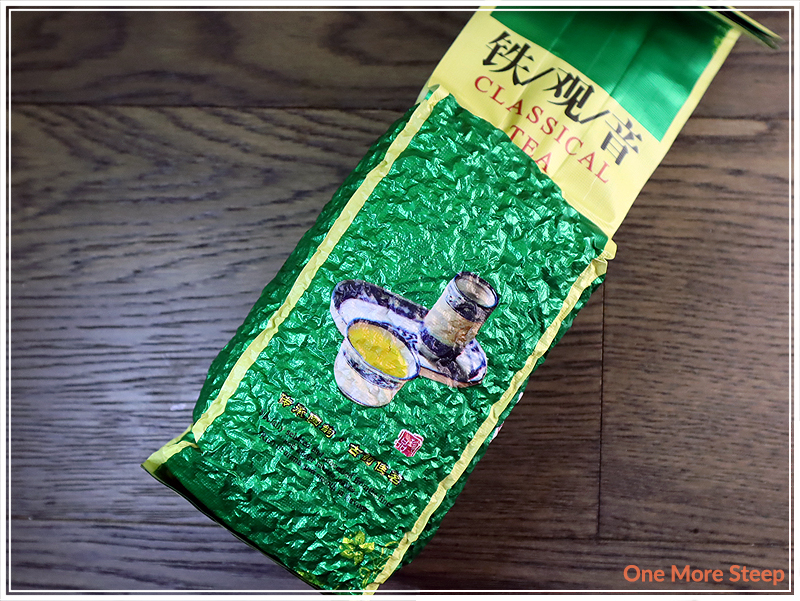 The aroma of the dry leaf is lightly floral, the leaves tightly bunched up. There’s a blend of spring green to dark green – it’s a pretty dry leaf to look at.

There were no steeping instructions that I could find on the packaging, which was fine. I used my regular steeping temperature and time for an oolong for this Tie Guan Yin. I used 195°F (91°C) water and did a steep for 2 minutes. 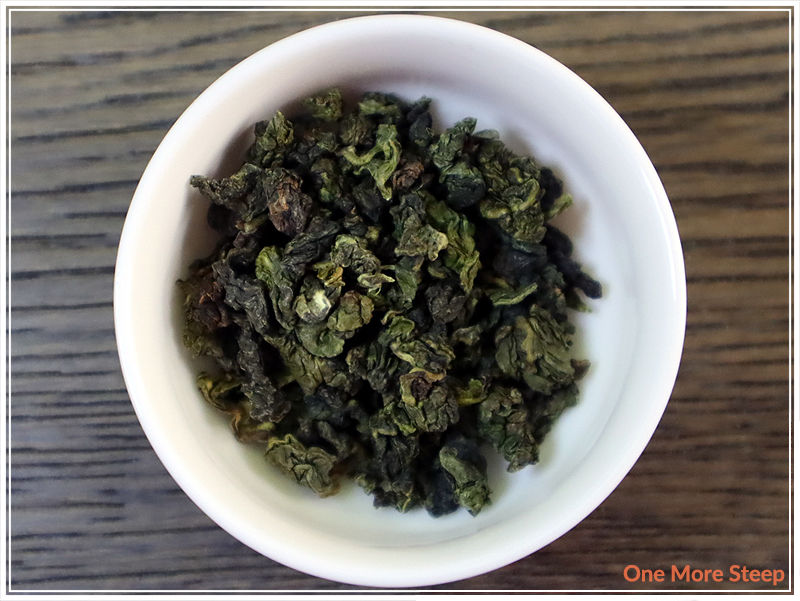 Tie Guan Yin steeps to a pleasant yellow, with some fine tea dust that escaped the stainless steel infuser that I was using. The aroma is lightly floral, and grassy. The tea itself has a smooth taste to it, with a light floral sweetness. I found it to have a crispness to it, with a pleasant mouthfeel. I found that there’s a slight creamy undertone to the tea, despite having a lightness to it. 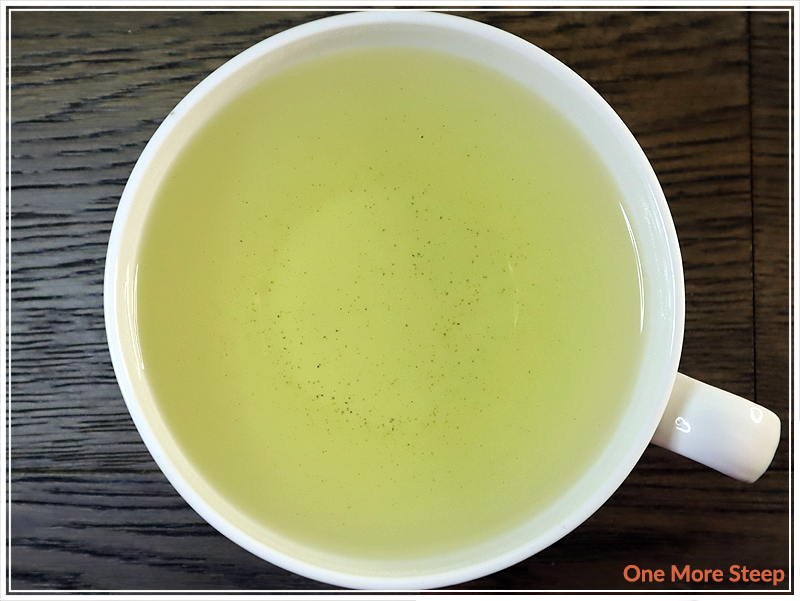 I did five resteeps of the same leaves, six steeps total. The subsequent steeps had an additional 30 seconds on top of the prior steep time. The flavour deepened and got a bit more creamy, with a fuller mouthfeel. 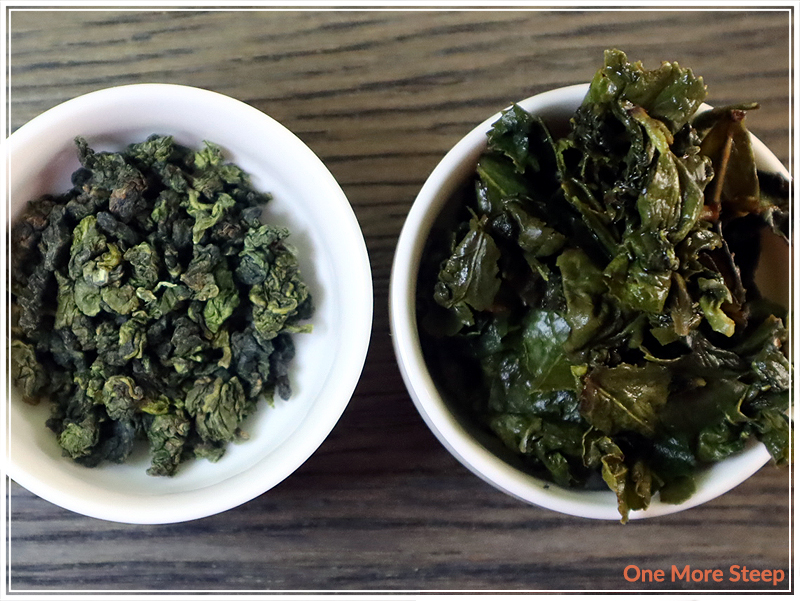 I loved DMDQ’s Tie Guan Yin. I found that the tea was tasty, and resteeped well. It has a very familiar flavour and is very similar to other tie guan yin teas that I’ve had previously. This Tie Guan Yin is pleasant to drink and have a nice afternoon resteeping session with, and the tea also has the benefit of being inexpensive for the volume of tea.