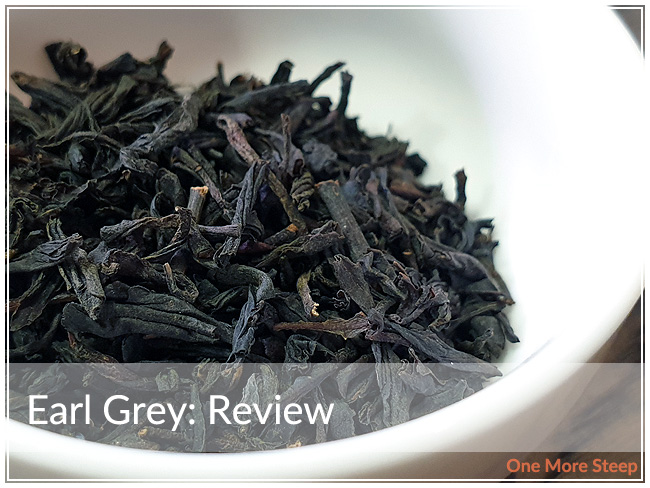 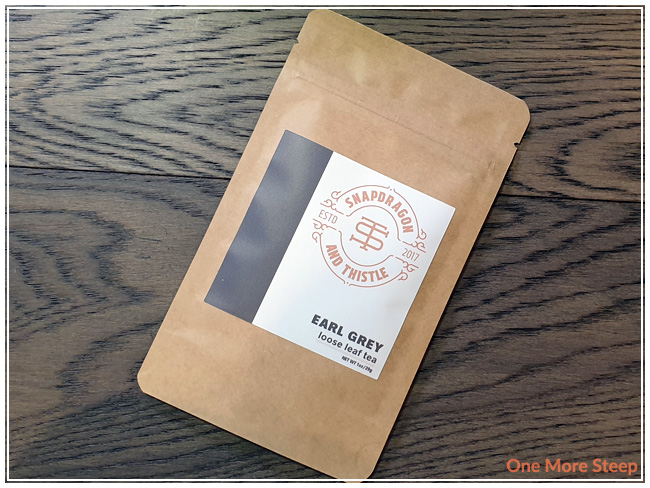 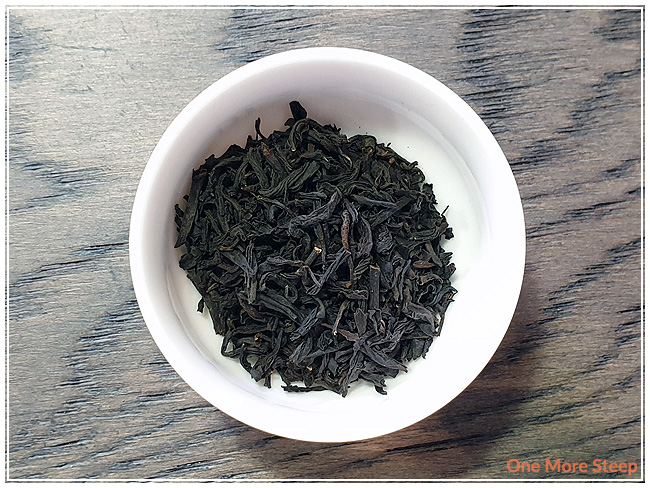 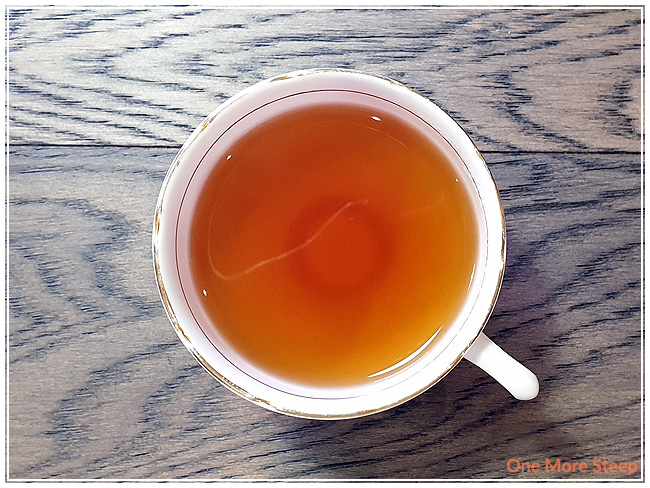 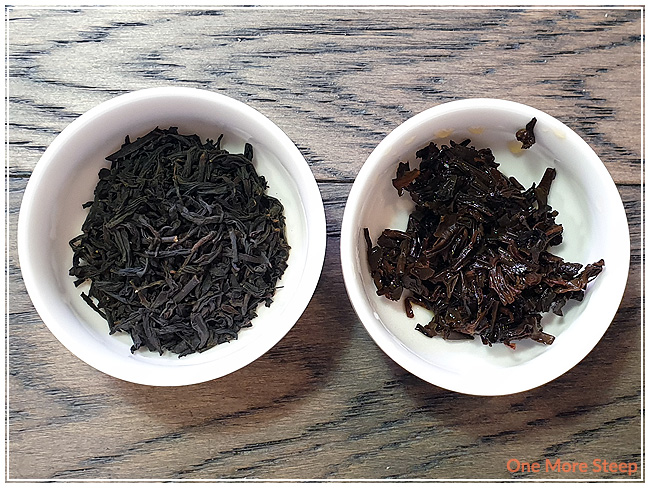 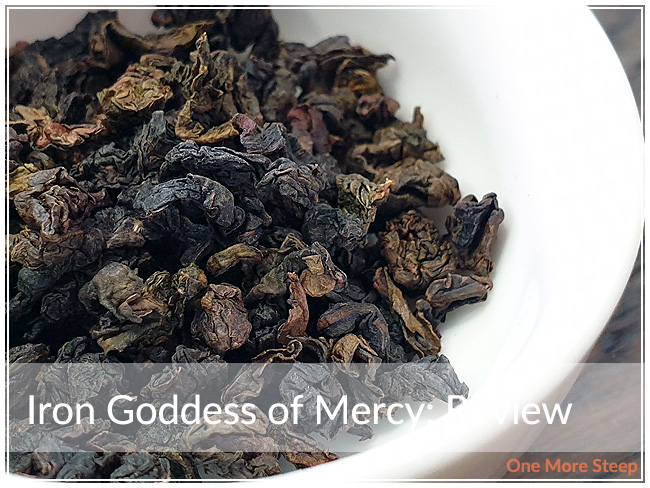 Snapdragon & Thistle has provided me with Iron Goddess of Mercy for the purposes of providing an honest review.

Use coupon code INSTA02 for 10% off your order of Iron Goddess of Mercy from Snapdragon & Thistle! Coupon code valid for May 2019.

I love trying oolong teas because there’s just something so lovely about a tea that’s been so lovingly created and can resteep well, so when Snapdragon & Thistle asked if I wanted to try some of their tea, I jumpd at the opportunity to try their Iron Goddess of Mercy. This oolong tea came to me in a sealed, resealable plastic-lined kraft paper pouch. The front features a logo stick from Snapdragon & Thistle while the back of the bag had a sticker that outlined the steeping instructions for this tea. 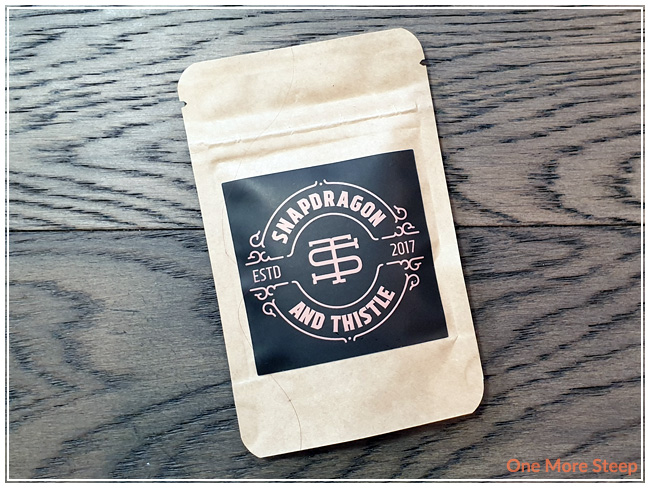 Iron Goddess of Mercy is an unflavoured oolong tea from the Fujian Province of China. There are light and dark brown leaves, all bunched up. There is a light nutty aroma from the leaves, with a hint of fruity notes when I take a deep breath. It’s amazing to think that these leaves will open up so much after being steeped! I always like to encourage people to resteep their oolong teas because there’s so much flavour in them. 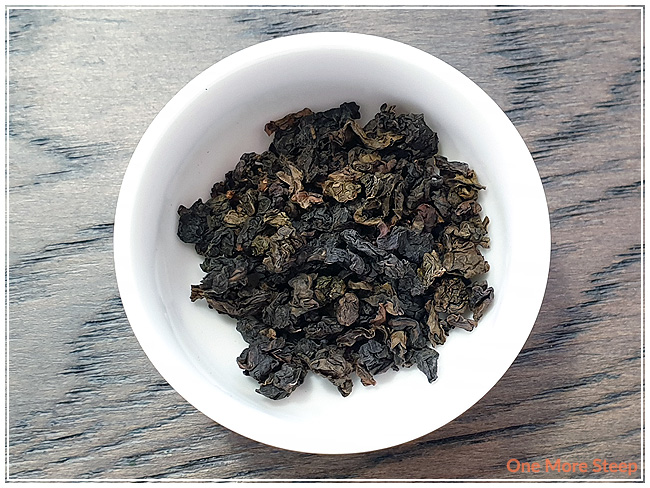 Snapdragon & Thistle recommends steeping Iron Goddess of Mercy in 200°F (93°C) water for 2 to 4 minutes. My initial steep was for 2 minutes.

Iron Goddess of Mercy steeps to a light yellow orange for the initial steep. I found that it had a light nutty aroma. On first taste, I can taste a buttery cream flavour, with hints of stone fruits (think apricots, plums) with a toasted nutty background at the tail end of each sip. It has a nice sweetness to it that is really enjoyable. 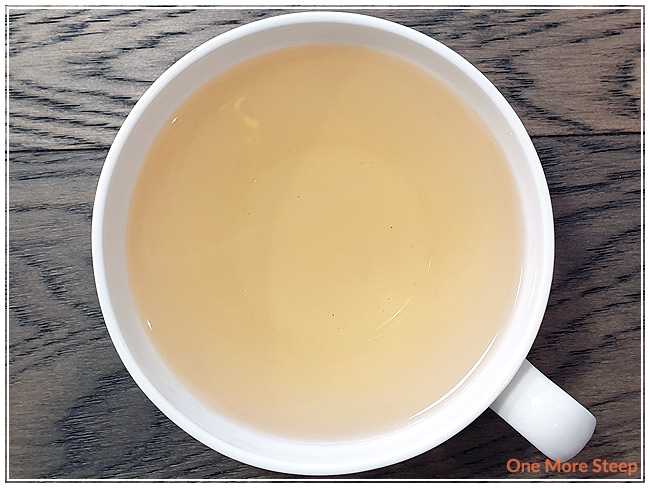 I resteeped Iron Goddess of Mercy a total of six resteeps, adding an additional 30 seconds for each subsequent steep. I found that as I continued to resteep these leaves, the tea got creamier with a heavier butter flavour while the fruity notes got a bit weaker. It was a nice shift in flavour with each sip. The toasted nutty flavour that I found at the end of each sip to stay fairly consistent throughout. 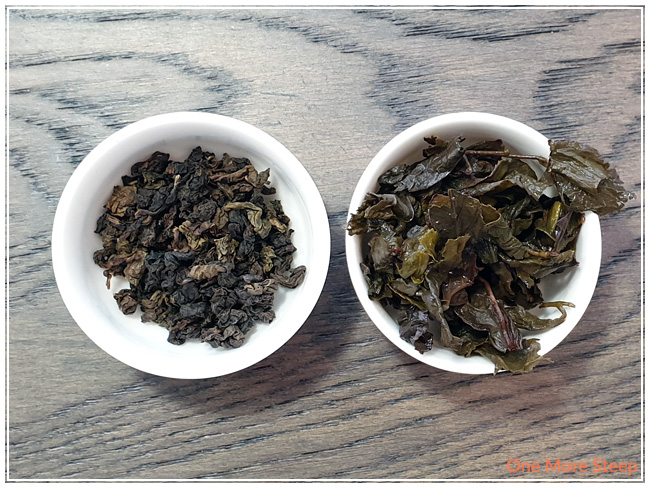 I loved Snapdragon & Thistle’s Iron Goddess of Mercy. I really enjoyed the complexity that I found in this tea’s flavour profile. It was just a very pleasant experience, and I enjoyed how the flavour shifted with each steep because it felt like the flavour got more decadent with the strong buttery notes. I think this tea would pair very well with both savouries and sweets, and might highlight afternoon tea really well because the butter flavours would play off of scones nicely. 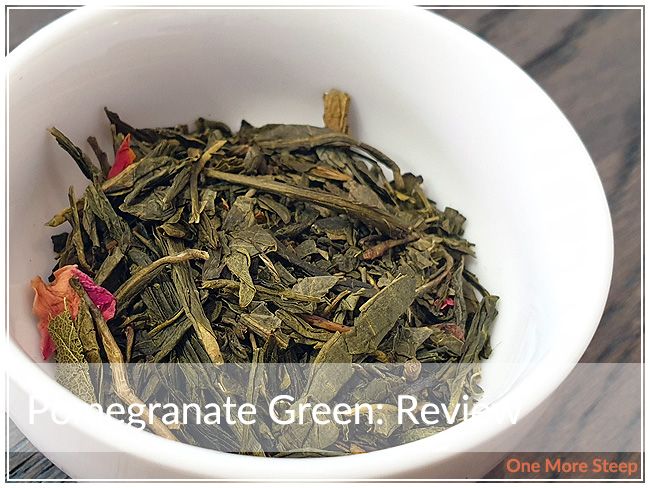 Snapdragon & Thistle has provided me with Pomegranate Green for the purposes of providing an honest review.

Use coupon code INSTA01 for 10% off your order of Pomegranate Green from Snapdragon & Thistle! Coupon code valid for May 2019.

Snapdragon & Thistle’s Pomegranate Green came to me in a sealed, resealable kraft paper pouch that is plastic lined. The front label identifies the tea, while there was a label on the back hat told me how to steep the tea, the ingredients, and the web and retail addresses for Snapdragon & Thistle. 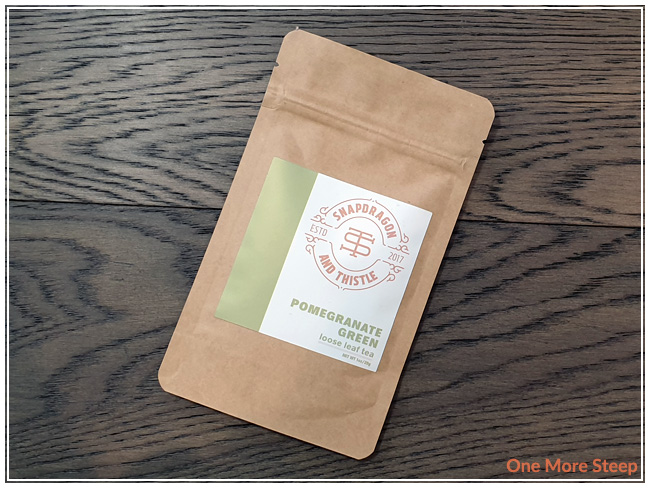 The first thing I noted when I opened the packaging was how fruity the tea smells! There’s a strong fruity fragrance that does remind me of pomegranates with a floral sweetness in the background. Pomegranate Green consists of: Chinese sencha green tea, pomegranate flavouring, and rose petals. The rose petals are very light in the aroma of the dry leaf, which is nice because I never want to anticipate drinking a bouquet of flowers. 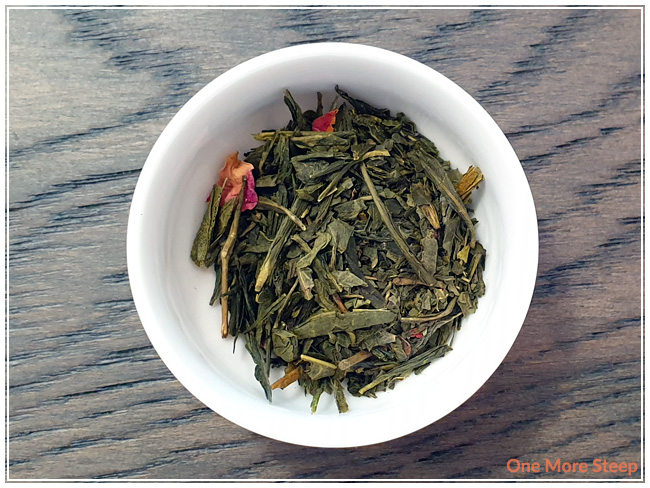 Snapdragon & Thistle recommends steeping Pomegranate Green in 170°F (77°C) water for 3 minutes. My variable temperature kettle’s lowest temperature setting is 175°F (79°C), so I allowed the water to cool for 5 minutes before steeping the green tea blend for 3 minutes.

Pomegranate Green steeps to a light golden yellow colour. There’s a very fruity aroma from the steeped tea, and I do smell a hint of roses as well – but as with the dry leaf, the roses play second fiddle to the pomegranate. I did notice that there were some fine little tea bits that got out of my stainless steel infuser, which you can see below in the photo. The flavour of Pomegranate Green is sweet and fruity, with a hint of rose in the tail end of each sip. I found that there was a slight saltiness in the background of each sip, which I attribute to the sencha base but it isn’t off-putting at all. If anything, it highlights the floral notes somehow.

I think Pomegranate Green would make for a nice iced tea since it has those fruity notes that are so popular in cold drinks. If you’re concerned about oversteeping the green tea, I would recommend cold steeping the tea. 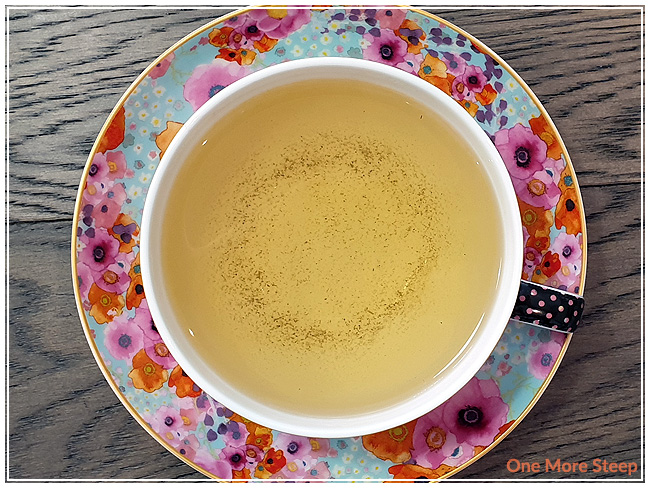 I resteeped Pomegranate Green once, adding an additional 30 seconds to the steeping time. I found that with the resteep, the pomegranate fruitiness was considerably less while the sencha base and rose flavours were more pronounced. So if you’re not a fan of the fruitiness, be sure to keep steeping it! 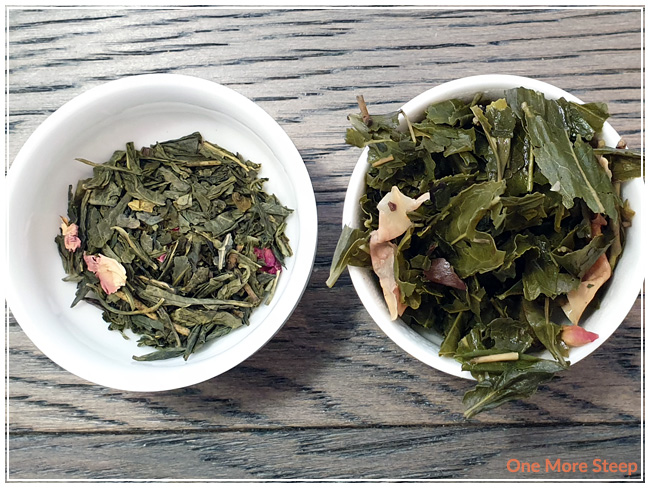 I liked Snapdragon & Thistle’s Pomegranate Green. I found the flavours to be pleasant and flavourful in the initial steep. The pomegranate flavour plays really nicely with the sencha green tea, and the rose petals aren’t overwhelming at all – which is always a concern of mine since I’m not always a fan of drinking heavily floral teas. I do wish that the pomegranate flavour had sustained longer for a second steep of the same leaves because it was so tasty in the first steep.