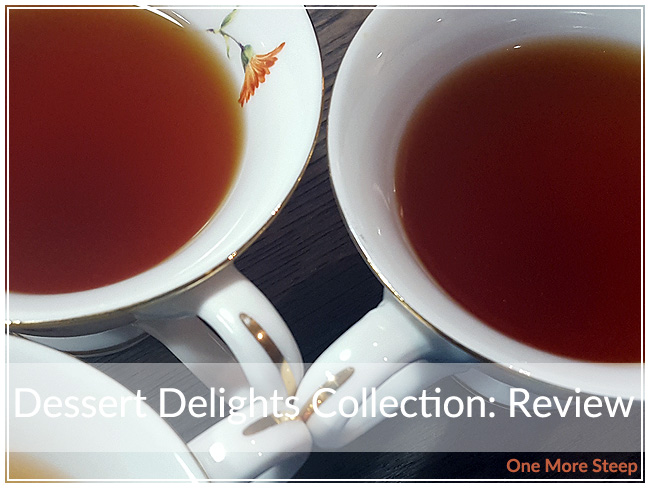 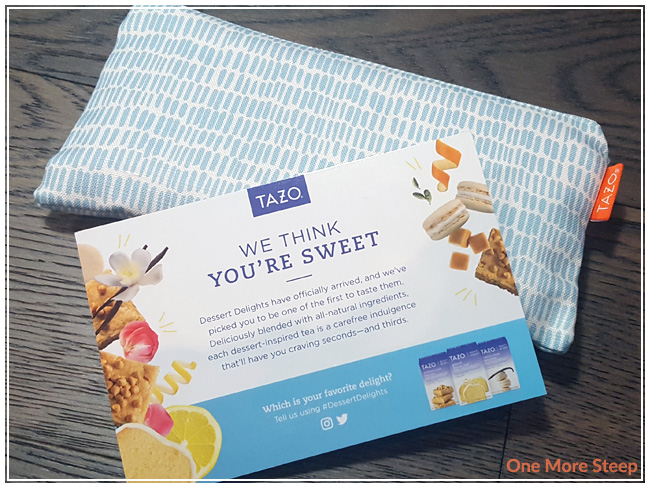 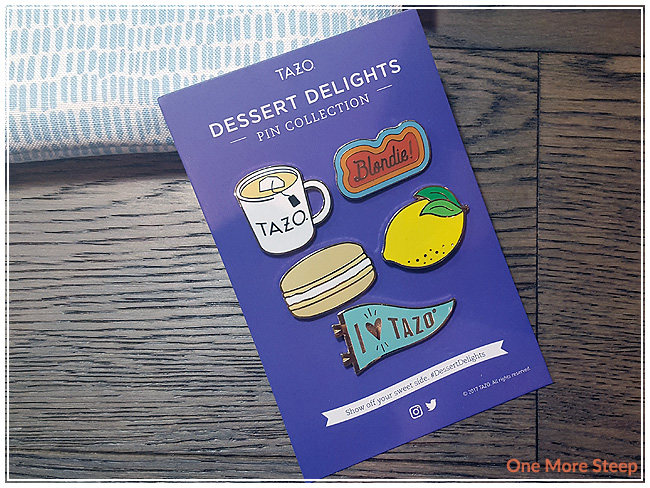 Tazo reached out to me to send me a little something. Fast forward to mid-December when I received a lovely package in the mail from them – complete with a zippered pouch filled with individually wrapped tea bags of their new Dessert Delights collection (Vanilla Bean Macaron, Butterscotch Blondie, and Glazed Lemon Loaf) along with a few extra teas that are part of their core collection (Zen, Passion, and Green Ginger) and an enameled pin set – aren’t they just sweet?

For the purposes of this post, I’ll be focusing on the Dessert Delights collection teas only and will be discussing them each in the same order throughout each section. 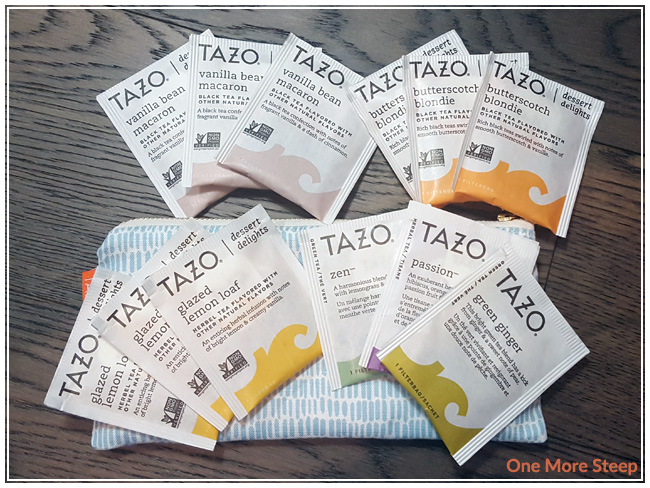 Vanilla Bean Macaron has a very strong vanilla aroma, but surprisingly does not contain vanilla in the ingredients. The ingredients listed are: black tea, natural flavours, chicory root, cocoa peel, licorice root, roasted yerba mate, cinnamon, and cardamom. I can make out the cinnamon and cardamom, and while the vanilla is delightfully strong, it doesn’t remind me too much of a macaron. (As an aside, on the back of the packaging of each bag, the information for the ingredients and steeping instructions are in white, and they’re a bit difficult to read unless you have excellent lighting.) 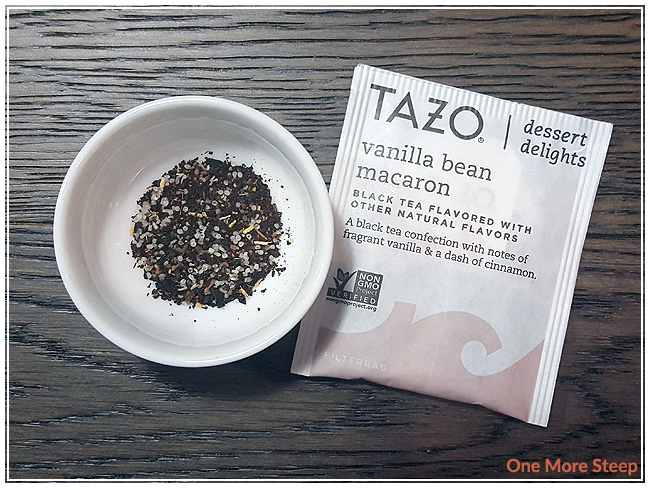 Butterscotch Blondie surprised me a lot by smelling just like a butterscotch candy. Surprisingly, the ingredients listed for this black tea blend is nearly identical to that of Vanilla Bean Macaron. This tea consists of: black tea, natural flavours, chicory root, cocoa peel, licorice root, cinnamon, and cardamom. Just missing the roasted yerba mate and it would have been just the same. 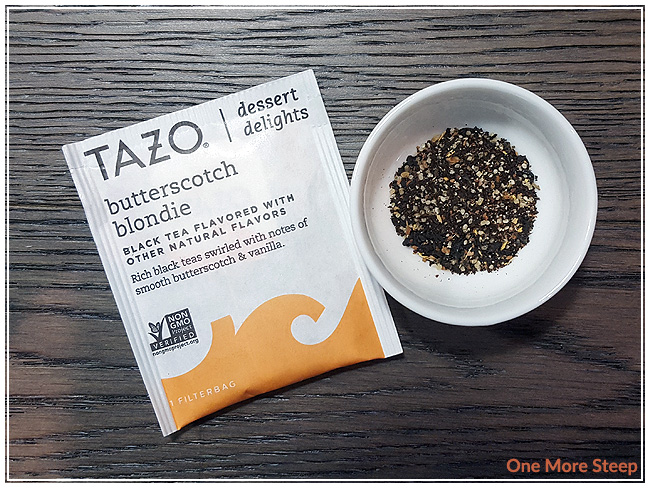 Glazed Lemon Loaf is the one that surprised me the most. This herbal infusion actually smells like a glazed lemon loaf. It has the citrus and vanilla aromas from the dry leaf, along with what reminds me of the aroma of a sugary glaze. This herbal infusion consists of: apple, natural flavours, green rooibos, orange peel, chamomile, rose petals, licorice root, and ginger. 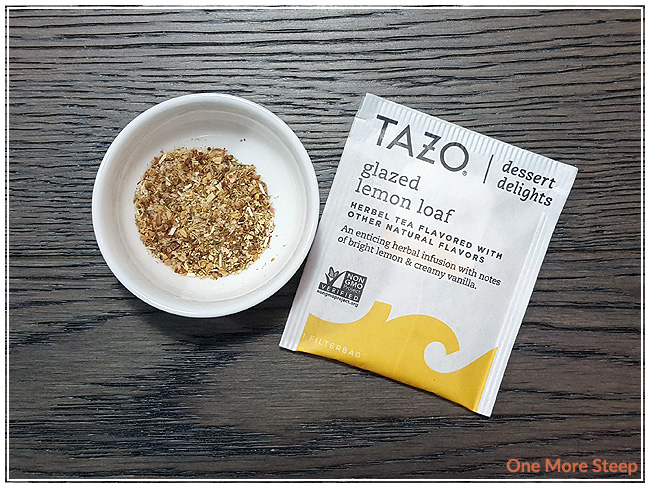 All three of the blends in the Dessert Delights collection suggests steeping in 212°F (100°C) water for 5 minutes. I steeped the two black tea blends (Vanilla Bean Macaron and Butterscotch Blondie) for 3 minutes each and steeped the herbal infusion (Glazed Lemon Loaf) for 5 minutes.

Vanilla Bean Macaron steeps to a deep orange with an unfortunate oil slick across the top. I’m not entirely sure which ingredient this came from (perhaps the ‘natural flavours’?), but I found that the aroma was very much vanilla. It reminds me of the aroma of vanilla cupcakes more than a macaron (although perhaps I just need to become more acquainted with macarons?). The flavour of vanilla isn’t subtle in the steeped tea. I found that the spices (cinnamon, cardamom) to be quite warming while the vanilla was just present. I was able to pick out the yerba mate at the tail end of each sip because it left a bitter aftertaste in my mouth. 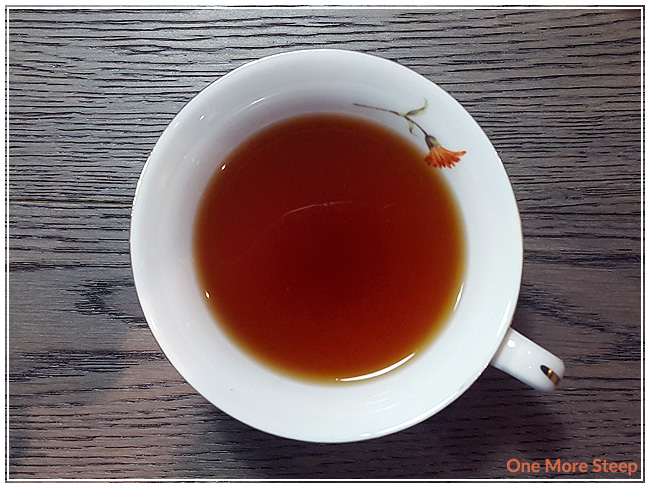 Butterscotch Blondie also steeps to a deep orange, but I didn’t notice an oil slick across the top of my cup. I found that the aroma of the steeped tea still screamed ‘butterscotch’ to me, although I didn’t find that to be the case with the flavour. I didn’t really find that it reminded me of a blondie when I steeped it straight, but I found that a tiny addition of sugar and milk actually helped it along to add some creaminess to it. 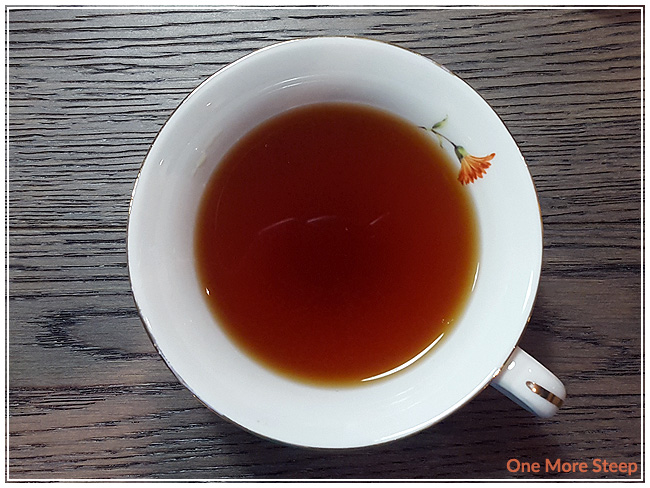 Glazed Lemon Loaf steeps to a happy and bright yellow. The aroma that wafts up from this herbal infusion is one of lemony citrus and sweetness. I found the flavour to be enjoyable, the lemon was rather calming (or perhaps that was the chamomile) and the sweetness was just enough. I could taste some heat from the ginger, and I found it to be nice and soothing. I think this tea was fine on its own, but was improved with a touch of honey. 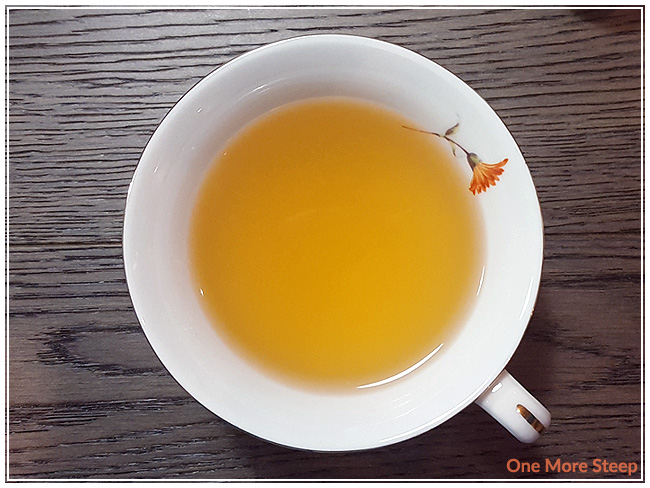 I did attempt to resteep all three of the Dessert Delights, but found that the second steepings of each were watery and diluted compared to the initial steeps. This can often be the case for teas found in tea bags, especially when the quality of the teas (and size of tea leaves) aren’t top notch.

I liked Tazo’s Dessert Delights Collection. I probably wouldn’t keep much of Vanilla Bean Macaron or Butterscotch Blondie around, but I would definitely buy a box or two of Glazed Lemon Loaf because I think it did the best with matching the name to the aroma to the flavour. Plus, the flavour combination makes for an excellent just-before-bed drink (or a I-have-a-sore-throat cuppa).

At the time of writing, I’m not entirely convinced that this collection is available in Canada. I’ve never seen it in stores, and none of the retail sites for Canadian groceries stores seem to have in in stock. However, if you’re in the USA, you’re in luck! The price isn’t bad either, considering you get 15 sachets for less than $3. Not a bad deal if you’re just looking to try it out.