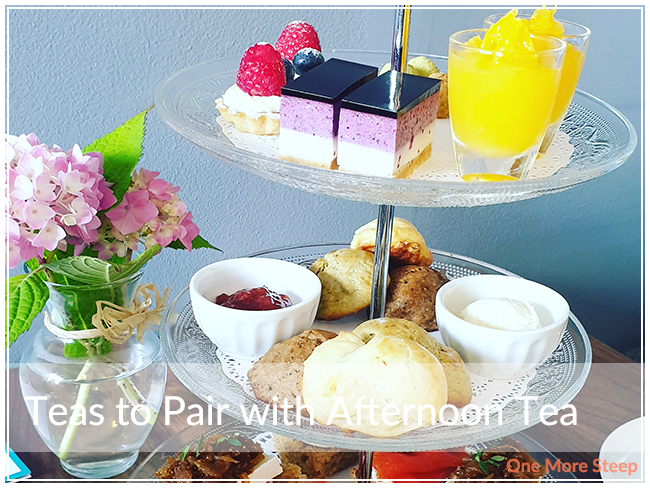 Afternoon tea has a lot of traditional aspects to it – from the cloth napkins, fancy desserts, and the delicate patterned china being used. And then there’s the teas. I just wanted to share some of my favourite teas for afternoon tea – and I’m going to touch upon some classic teas and tisanes, as well as some more modern options that you might not have thought of pairing with your afternoon tea menu before.

I can’t write about classic teas without mentioning Earl Grey. Earl Grey is a traditional part of afternoon tea and is usually the first tea that gets offered. The black tea blend with bergamot pairs very nicely with cream and sugar – and there’s many takes on the Earl Grey blend, but the traditional one is always tasty. The citrus notes make it bright and fresh.

Darjeeling Black Tea and Assam Black Tea are two black teas are both lovely options. Teas from the Darjeeling and Assam regions of India became popular in Europe as teas from China came out of favour, so both are popular options for afternoon tea. There are differences in the flavour – because the regions have differences in their growing seasons. I found teas from Assam can become astringent easier than Darjeeling teas, but that is also dependent on when the tea is harvested and the particular growing season. Both teas, because of being black teas, take really well to cream and sugar as well.

For the caffeine-free crowd, chamomile and mint are both very popular tisanes! I find them both pleasant, but you have to actually like chamomile or mint to drink it. I don’t add cream or sugar to either, but I have heard of people adding sweetener to mint before (but I don’t find it necessary).

I love oolong. I don’t even pretend to be shy about it, so I think oolong would make a great option for afternoon tea! Sure, it’s a fairly traditional Chinese tea, and most places that serve afternoon tea probably don’t have it on the menu… But during COVID-19 times, are we even going out anymore? Have we not become one with our own couch? With that in mind, I think a nice Tieguanyin (aka Tie Guan Yin, Iron Goddess of Mercy, Iron Buddha) would be fantastic tea offering for afternoon tea. First off, this oolong typically resteeps well, goes well with sweet and savoury, and is just a really nice tea and I think everyone should try it.

Green tea doesn’t get mentioned nearly as much as I think it should when it comes to a tea menu for afternoon tea. I think that both Jasmine Green Tea and Matcha should be shining stars! The issue with having them included in an afternoon tea menu is water temperature and also the preparation. I don’t think most places are well-equipped (just yet…) for making a good cup of matcha. Which is unfortunate because I don’t think it’s that intimidating (any more…)..

For the white tea fans, Bai Hao Yin Zhen (aka Silver Needle, Yin Zhen) is a great option. If you’re not familiar with this tea, it has some beautiful leaves that have feathery down on the leaves and it just has a really nice flavour – typically light, floral, with a natural sweetness. It would go well, in particular, with sweets – but I’m fond of sipping it with a meal so it’d go well with those tea sandwiches as well.

I couldn’t round out this list without mentioning Hojicha. I’ve really fallen in love with this roasted green tea from Japan, and it can go really well with a savoury meal. More importantly, it is great as a tea latte and takes well to being sweetened. You can find hojicha in both leaf and powdered form – the powdered form can be prepared like you would with matcha (read The Basics of Preparing Matcha to learn more).

What teas do you like to have with your afternoon tea? Have you tried any (or all?) with your tea sandwiches and scones? Share your favourite with me below in the comments! 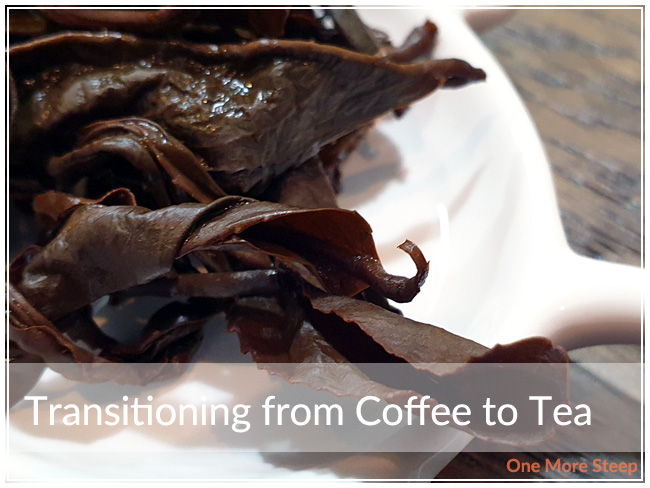 I will preface this by stating that I am not a coffee drinker. I never have been, and never really be too interested in coffee (I’m not a fan of the smell!). But I do know that a lot of people enjoy coffee and need or have gotten used to that extra jolt of caffeine in the morning to help them start their day. As a health care professional, I know a lot of people who love their coffee.

Yes, both tea and coffee contains caffeine naturally (herbal tisanes and decaffinated drinks aside). But tea contains less caffeine than coffee, so you will experience less of that caffeine jolt when drinking it. For some, lowering the caffeine consumption may be something recommended to you by your health care professional for a myriad of reasons. And cup for cup, you’ll consume less caffeine with tea than coffee which means less diuretic effects (and helps you stay hydrated).

If you’re the habitual multi-cup coffee per day drinker, how do you make that switch? Start by swapping out one cup of coffee for a cup of tea. Work your way up to no coffee and all tea, or keep that one-cup-a-day and feel good about yourself having transitioned the rest to tea.

It’s unrealistic to quit coffee cold turkey and go straight to tea – you’ll get caffeine withdrawals and the headaches to boot, and unless you’re in a serious health crisis, why do that to yourself? Make the gradual transition by just swapping out one cup a day for tea.

My tea recommendations for someone making the transition from coffee to tea are as follows: 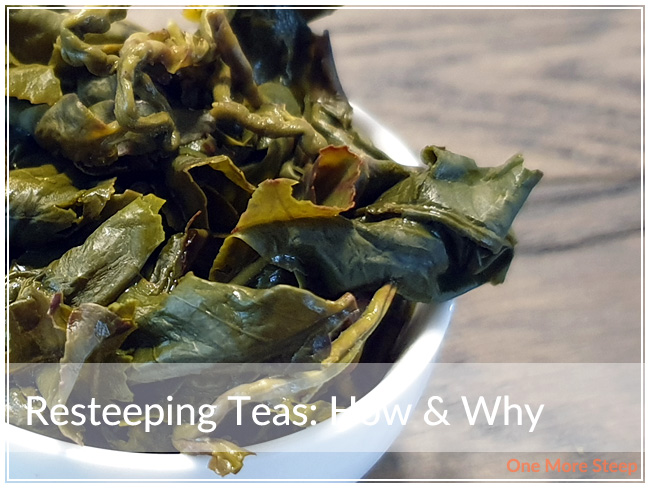 I talk a lot about resteeping tea here on One More Steep. To me, it’s one of the signs of a good quality tea: being able to resteep the same leaves and get more drinkable tea out of it with a good amount of flavour.

Resteeping leaves allows you to further the tea drinking experience with the same leaves. This works best with straight/traditional teas (e.g. teas that have no added flavourings, fruit ingredients), not tisanes. Tisanes often don’t do well when being resteeped.

After I steep the leaves, I will remove my infuser from the tea pot and rest it in a bowl or on a plate to allow the leaves to drain (so they do not continue to steep!). The leaves don’t fully dry out between steeps, so when I’m ready for the next steep, I just insert the infuser back into the tea pot and pour in more water.

Please note, if you opt to resteep leaves, you should be doing it all in the same day. If you leave out the leaves overnight or longer, you run the risk of mold growing on the leaves – the leaves are damp and provide a moist growing environment for mold spores. I only resteep my tea leaves during the same day as the initial steep.