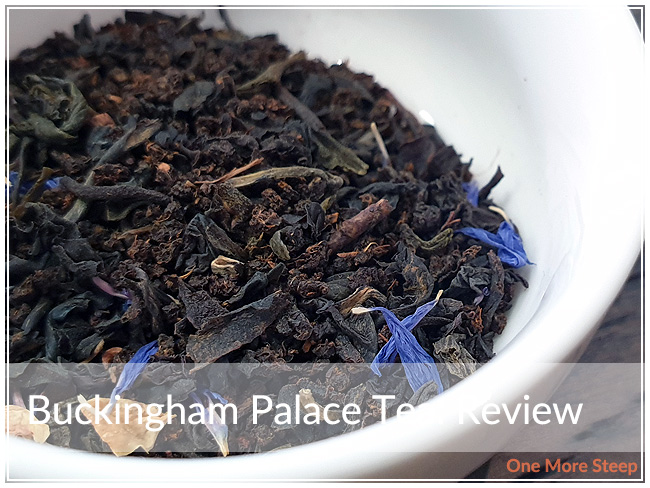 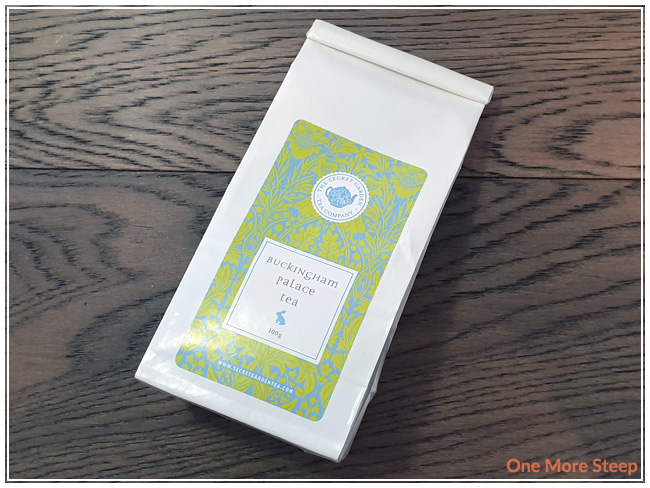 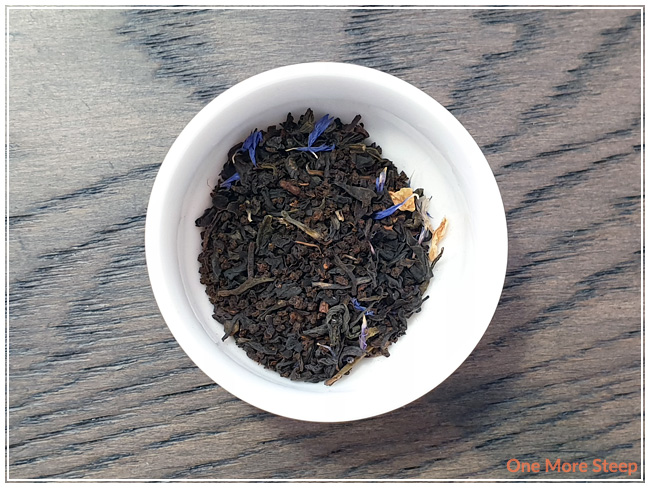 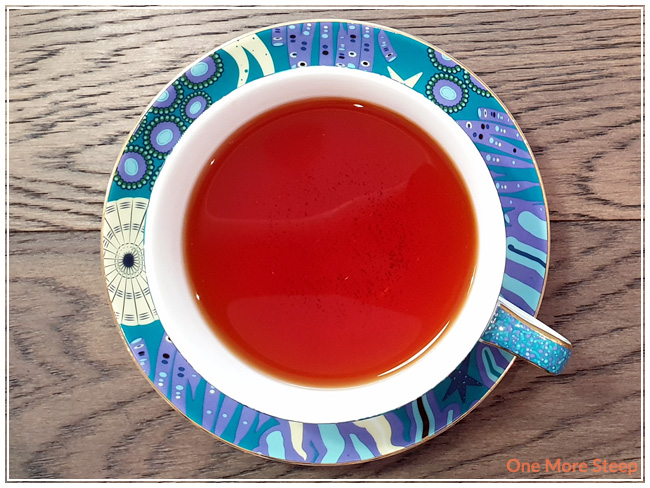 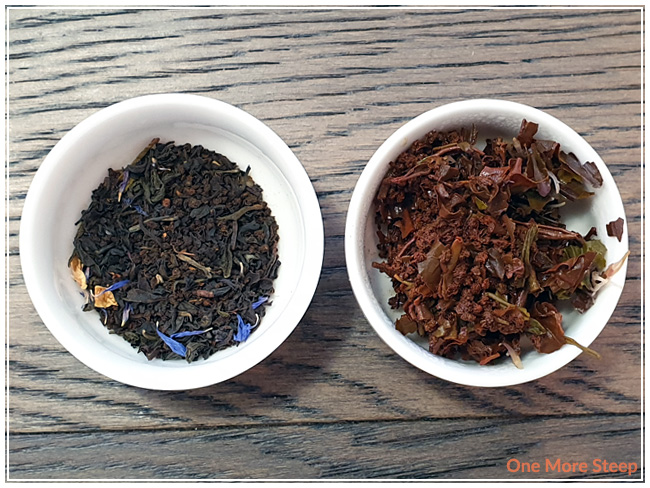 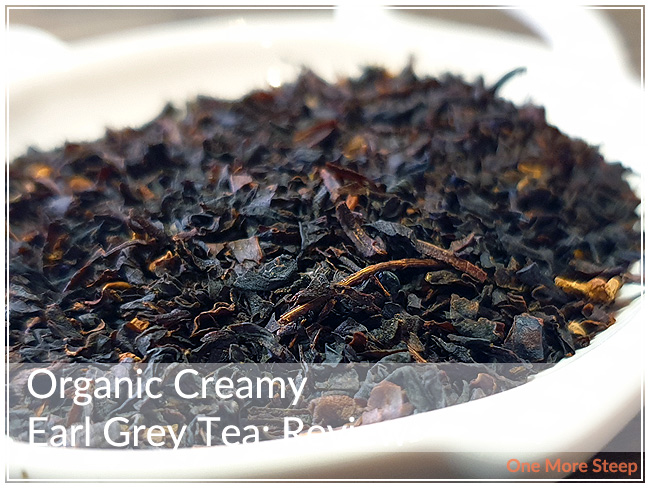 I bought Organic Creamy Earl Grey Tea when I was at The Secret Garden Tea Company for afternoon tea back in March. The retail side of their shop was full of tea paraphernalia (teacups and tea pots everywhere!) and I couldn’t help but make a little purchase since I was already there. This was one of the teas that was recommended by the server that my friend and I had, and while I didn’t end up getting it as my tea choice, my friend had and said it was “Really, really good!” so I had to give it at try at home. Organic Creamy Earl Grey Tea comes in a plastic-lined paper pouch that closes with a metal band. It’s not air-tight, but it makes for a nice presentation. If you’re like me, you have a lot of extra glass mason jars or tea tins on hand, so it’s an easy issue to fix. 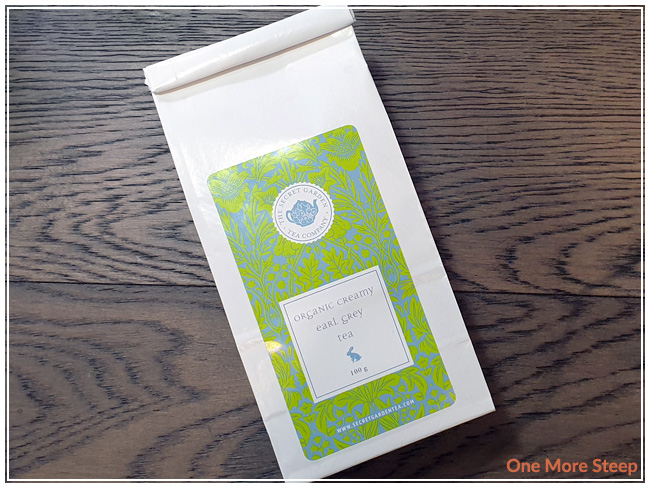 The loose leaf black has some nice citrus notes, with a hint of vanilla in the background. The packaging only mentions the name of the tea with no information regarding the ingredients or steeping instructions. I was able to find the ingredients list on the product page on The Secret Garden Tea Company’s website. Organic Creamy Earl Grey Tea consists of: organic black tea, osmanthus flowers, and organic natural flavouring. I can definitely smell the bergamot and vanilla, which are two flavours mentioned on the product page. 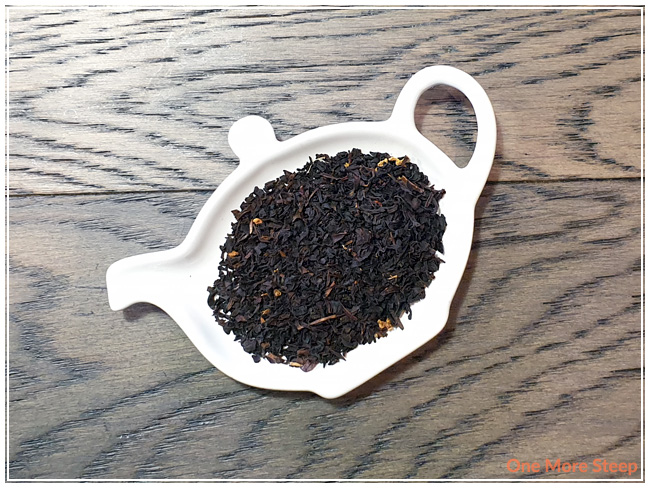 There were no steeping instructions for Organic Creamy Earl Grey Tea on either the packaging itself or on the product page online. I opted to do an initial steep with 100°C (212°F) water for 3 minutes.

If you’re ever stuck on a tea because there’s no instructions included, you can check out my Steeping Times for Different Teas guide for suggestions on how to steep your tea.

Organic Creamy Earl Grey Tea steeps to a nice golden orange colour. There’s a nice citrus aroma from the tea, with a hint of the vanilla in the background. I found the flavour to be quite pleasant – the bergamot is strong, and there’s a creamy vanilla flavour to it. The black tea flavour is strong, and it has a nice boldness to it that has a slight malty note to it. I found that with an initial steep of 3 minutes there was no astringency or bitterness that I could detect. 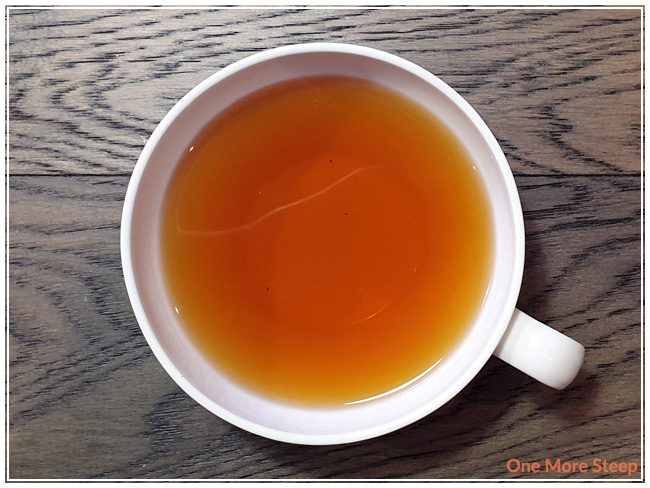 I tried it both straight and with a bit of added cream, which I found helped amplify the creamy vanilla flavour and didn’t temper the bergamot too much so it was still quite tasty.

I resteeped Organic Creamy Earl Grey Tea twice, adding an additional 30 seconds for each subsequent steep. I found that the first resteep was quite similar to the initial steep – with less bergamot and vanilla. For the second steep, I found very little bergamot and vanilla flavour. I would recommend Organic Creamy Earl Grey Tea for just one more steep. 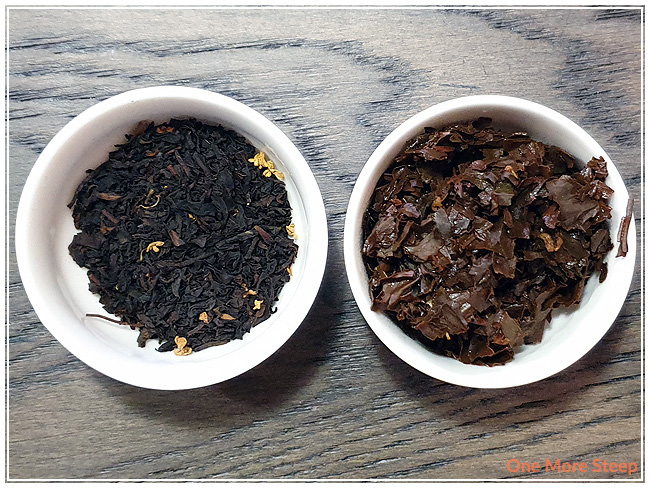 I loved The Secret Garden Tea Company’s Organic Creamy Earl Grey Tea. I can see why the server had made a recommendation for this tea as it’s quite delicious. I normally don’t find creamy Earl Grey teas to be that good, since I like to add my own cream/milk to it, but this one had a great vanilla flavour to it that really added to the overall creaminess and smoothness to the tea. It had a great mouthfeel texture to it, and it did great for resteep which is always important in my opinion! 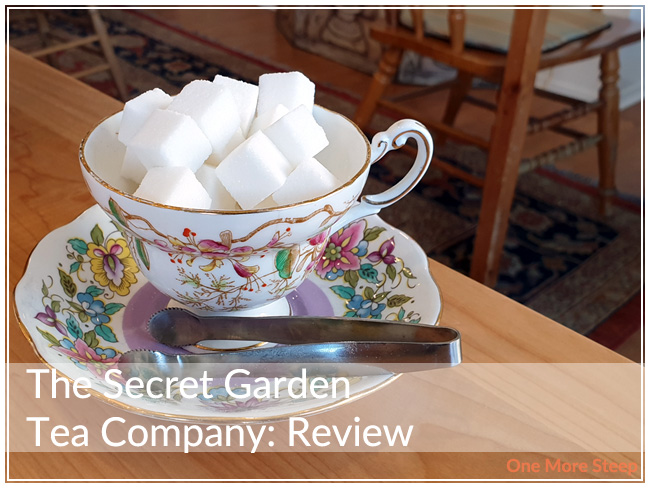 I recently went to High Tea at The Secret Garden Tea Company, which is located in the Kerrisdale neighbourhood of Vancouver, BC. This lovely location boasts both of a shop section and a dining section, with seasoning high tea menus that change every couple of months. I went in March 2019, so the food selection is different now. There are also vegan and gluten-free high tea options, at $40 per person, as well as a children’s menu at $25 per person. 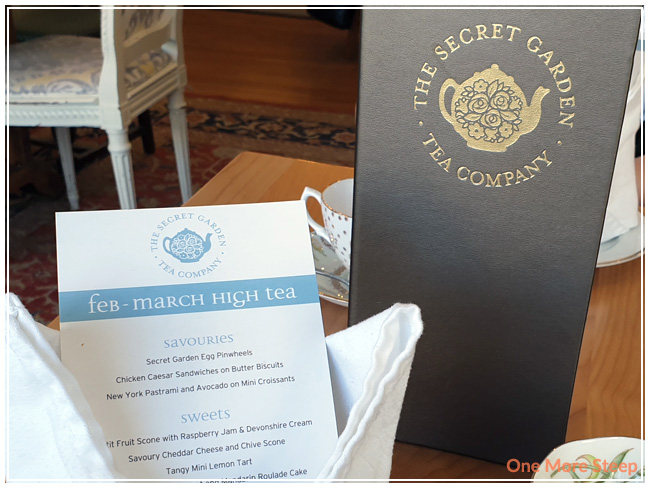 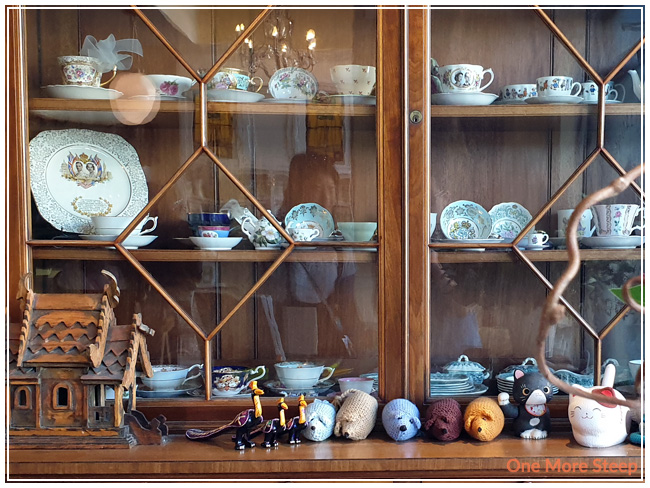 Both my friend and I selected different teas  – we each got our own teapot that came nestled in a tea cosy that had The Secret Garden Tea Company’s logo and name embroidered on it. The place settings were tea cups and saucers that differed from each person, which added a sense of whimsy to it. The sugar cubes came in a tea cup with a pair of silver tongs – which I found to be just darling. 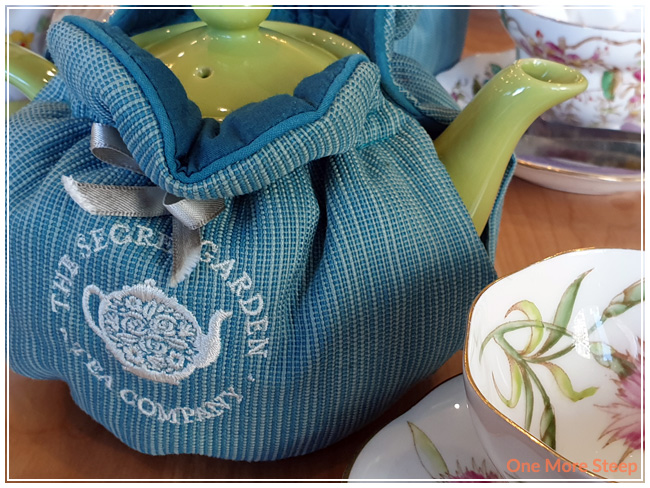 For our tea selections, there was an extensive list of variations of Earl Grey, along with some non-Earl Grey tea choices.My friend opted for the Organic Creamy Earl Grey (black tea, bergamot, vanilla), which she told me was delicious. I had the Lavender Earl Grey (black tea, lavender from Provence, France, cornflower petals, and natural flavouring) because I’m just all about the lavender these days. 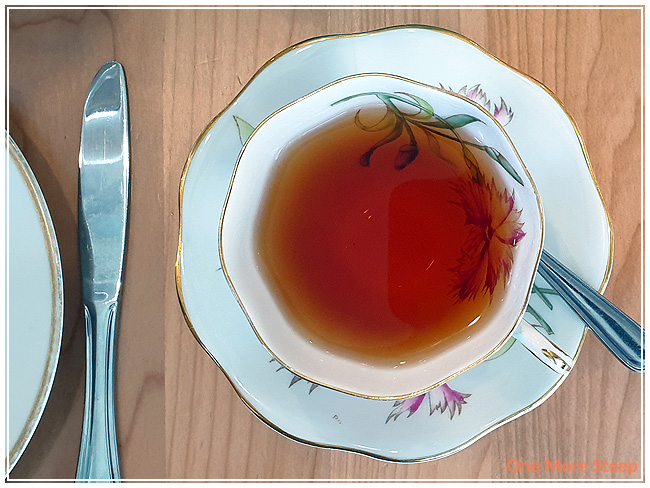 The food arrived in a three-tier stand. The bottom being savouries, then the scones, and finally dessert. 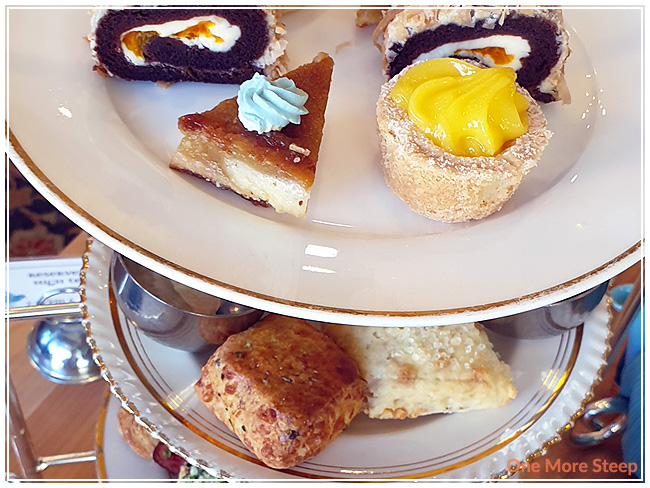 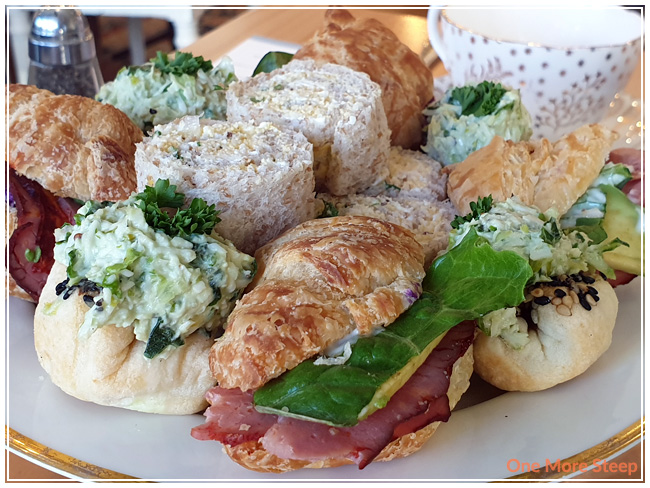 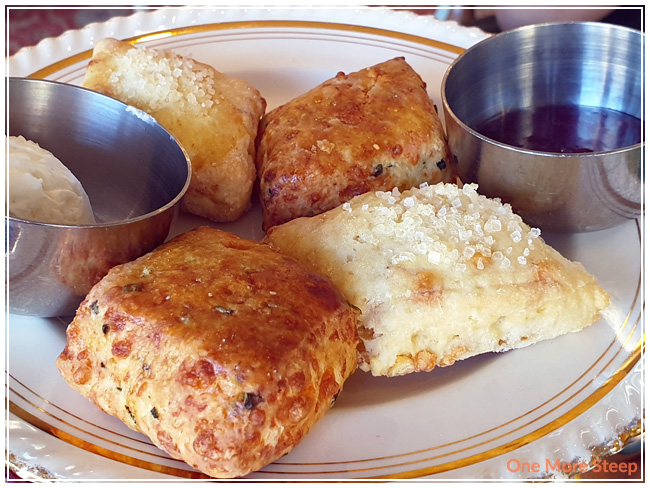 The scones tier was quite fun. There was the Petite Fruit Scone, which was paired with the Raspberry Jam and Devonshire Cream, and a Savoury Chedder Cheese and Chive Scone. I thought that the Petite Fruit Scone was delicious with the sugar crystals baked into the top. But my favourite would have to be the Savoury Cheddar Cheese and Chive Scone. It was heavenly and I’m still surprised at the fact that I enjoyed it more than the sweet option since I’m normally all about the sweets. 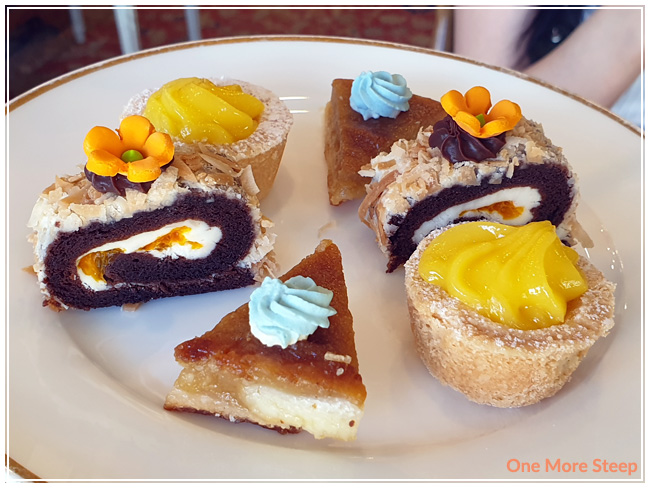 Finally – the sweets! There was the Tangy Mini Lemon Tart – I had this one first and was a bit let down by it. I’m a huge fan of lemon curd, but I found that the ratio of lemon curd to tart crust was just a little bit off for me. I think a thinner crust would have suited me better, but that’s one non-foodie’s opinion! Then there was the Chocolate Coconut and Mandarin Roulade Cake which I found to be rich and delicious. The toasted coconut on the outside provided a light crunch, while the chocolate cake was just oh-so-rich. I definitely made happy noises when eating it because it was just that good. Last, but not least, was the Maple Pie with Vanilla Chantilly Cream. While I was a little bit confused by the blue-grey colour of the vanilla chantilly cream, the Maple Pie itself was tasty. It had a great maple flavour without being overly sweet, which is probably no easy feat since maple syrup is practically pure sugar. My favourites from the sweets tier would have to be the Roulade Cake and the Maple Pie.

I had a wonderful time at The Secret Garden Tea Company, and I can see why it’s a favourite for afternoon tea in Kerrisdale. Their branding is on-point and well represented throughout the darling shop and dining area, and I love the fact that they offer seasonal menus to change it up and allow patrons to read over the varying menus on their website. The service from the ladies working at The Secret Garden Tea Company on the Monday that my friend and I went was top notch – starting from the hostess who greeted us at the door to the knowledgeable server who was able to offer her thoughts on the different Earl Grey options. It’s a lovely spot in Kerrisdale to go in for tea, and they even offer High Tea daily at three different serving times! I would definitely go back for tea the next time that I’m in the neighbourhood. 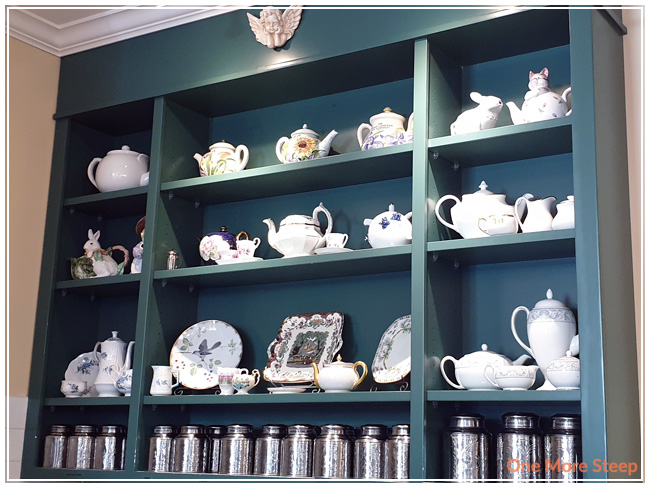