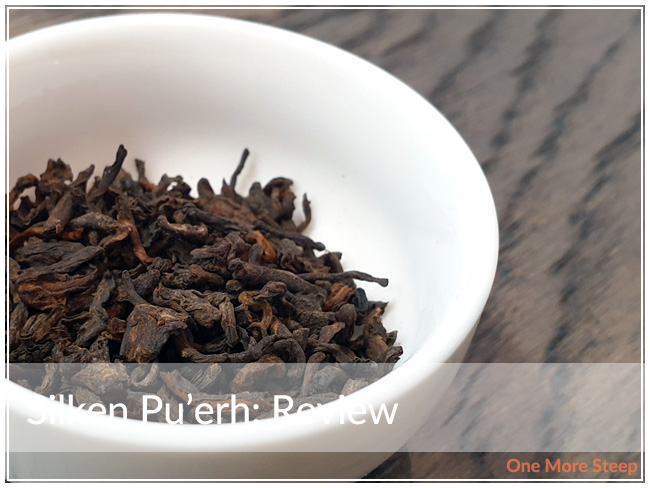 DavidsTea’s Silken Pu’erh is an organic pu’erh tea from Yunnan Province, China. The tea comes in a familiar sealed, resealable foil pouch with a coloured label on the front. I bought this tea on a whim, mostly because I realized that I haven’t had a lot of experiences with pu’erh teas so I wanted to give it a whirl. 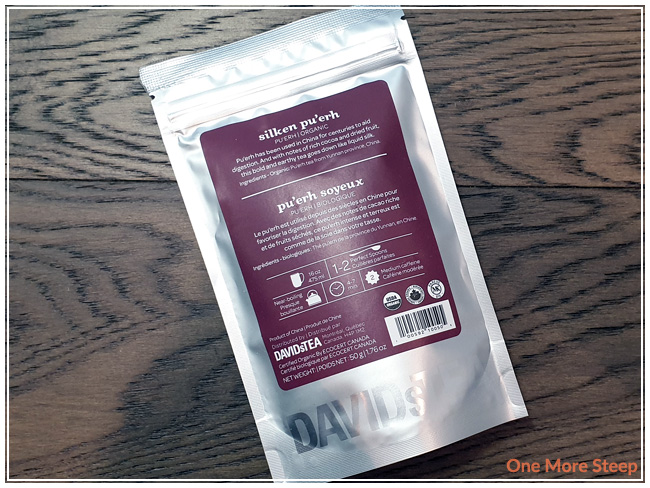 The leaves are a range from deep reddish brown to chocolate brown shades. There’s a definite earthy aroma to the tea, and just a light little bit of sweetness when sniffing the dry leaf. It definitely intrigues me enough to steep it. 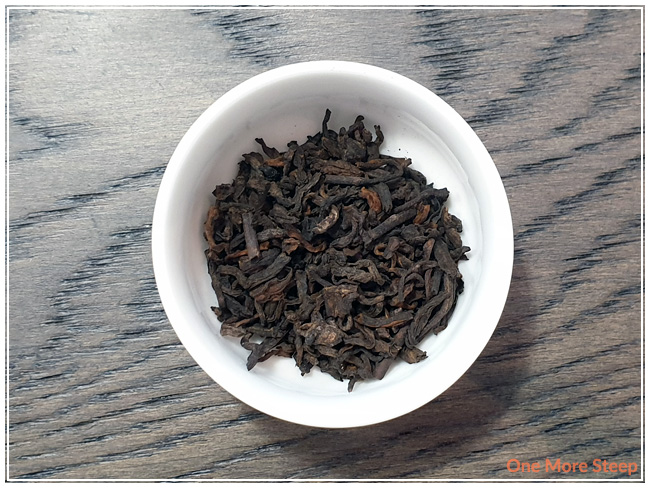 Silken Pu’erh steeps to a nice golden orange colour after the initial 5 minute steep. I found that there was an earthy aroma to the steeped tea as well. On taste though, I noticed that the tea is smooth – there’s a pleasant sweetness that lingers that reminds me of the flavour of young jackfruit. It balances well against the earthy notes that do remind me a bit of cocoa nibs, but without the obvious chocolate flavour. With the 5 minute steep, I noticed zero astringency or bitterness. 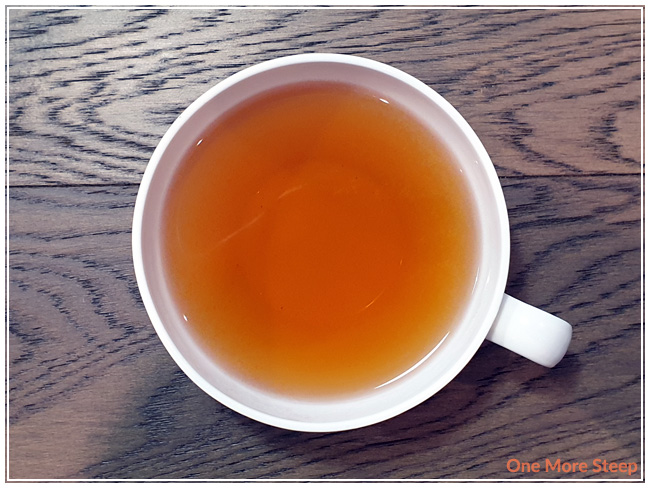 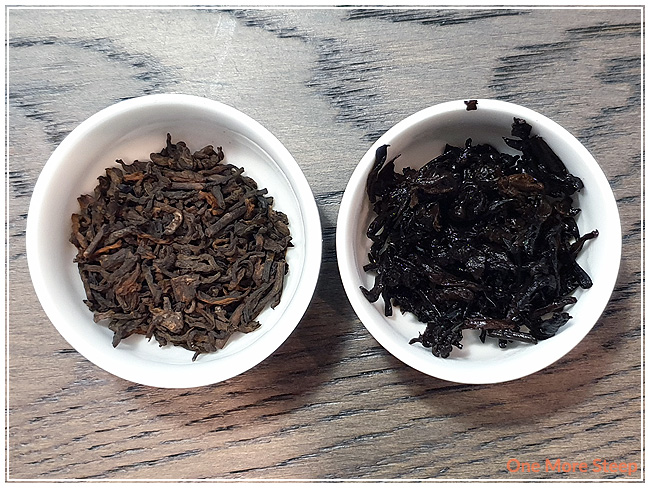 I loved DavidsTea’s Silken Pu’erh. I really enjoyed the flavour profile of this tea – the earthy qualities balanced very well against the flavours of young jackfruit. I liked that I was able to resteep the same leaves multiple times and get some deeper flavours out of the leaves and that it was an easy tea to drink. It reminded me a lot of going out for dimsum with my family because pu’erh is a very common tea to be offered at dimsum, so it made for a nice experience and I think it would pair very well with savoury food. 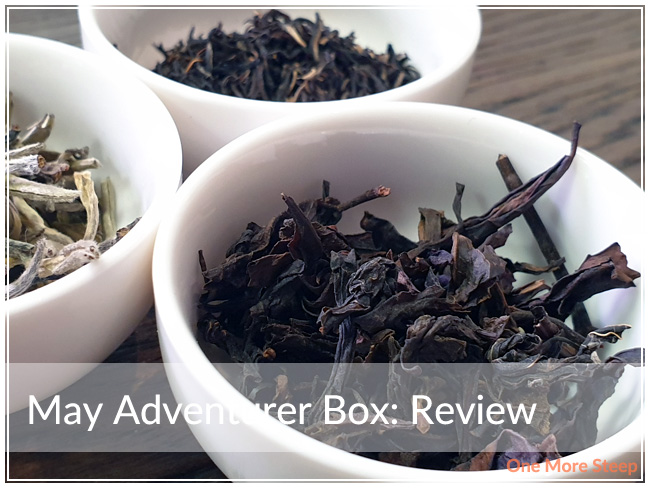 Field to Cup has provided me with the May Adventurer Box for the purposes of writing an honest review. 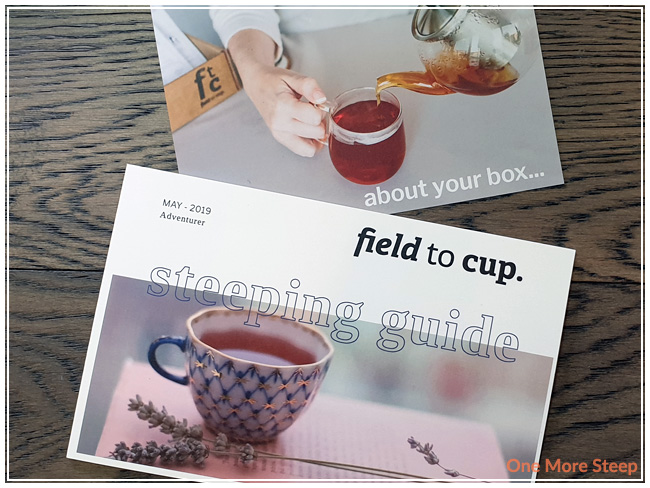 As always, the Adventurer Box came to me in a brown cardboard box – just stuffed full of tea, steeping bags, and the steeping guide catered towards the teas in the box. The May Adventurer Box consists of 5 teas – two green teas and one each of black, oolong, and pu’erh teas. Each tea came in a sealed, resealable pouch that has a label affixed to the front that details the tea, tasting notes, steeping instructions – as well as a guide to steeping it in the appropriate water temperature if you don’t have a thermometer or variable temperature kettle (my kettle is still my favourite small appliance purchase ever). 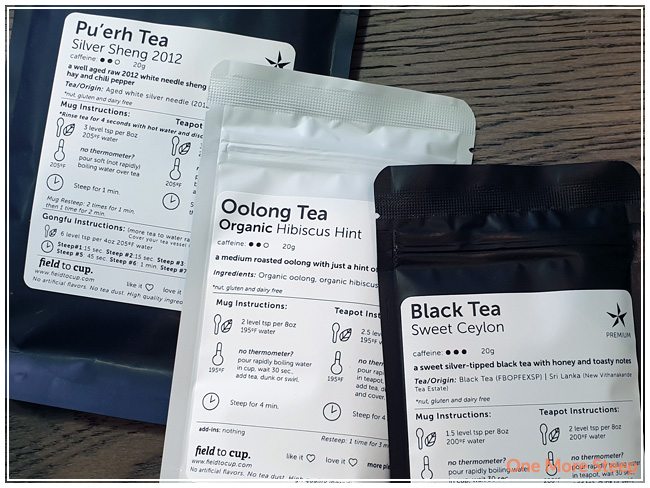 The first trio of teas that I tried from the May Adventurer Box were: Silver Sheng 2012 (pu’erh tea), Organic Hibiscus Hint (oolong tea), and Sweet Ceylon (black tea). Silver Sheng 2012 looks like a silver needle (a white tea), which isn’t surprising as it’s an aged raw 2012 silver needle. The leaves still retain their downy feathers, but is slightly darker than a regular silver needle. This aged white silver needle is from the Yunnan Province of China. Organic Hibiscus Hint has some dark brown leaves that have some deep purple colouration, I can spy some hibiscus in the blend and it smells like preserved plums (those that grew up in an Asian household may know the aroma that I’m talking about!). This blend consist of organic oolong and organic hibiscus. Sweet Ceylon has some dark red and brown leaves, with some golden tips throughout. The primarily aroma is a toasted nutty fragrance that is inviting and reminds me of a savoury tea. Sweet Ceylon consists of Sri Lankan black tea (FBOPFEXSP) from the New Vithanakande Tea Estate. 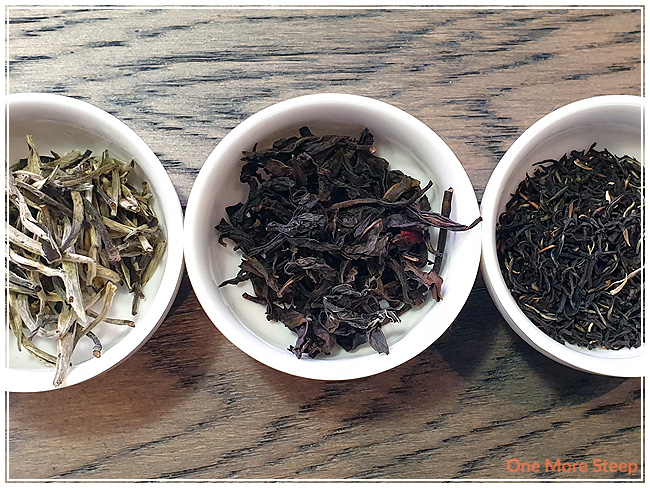 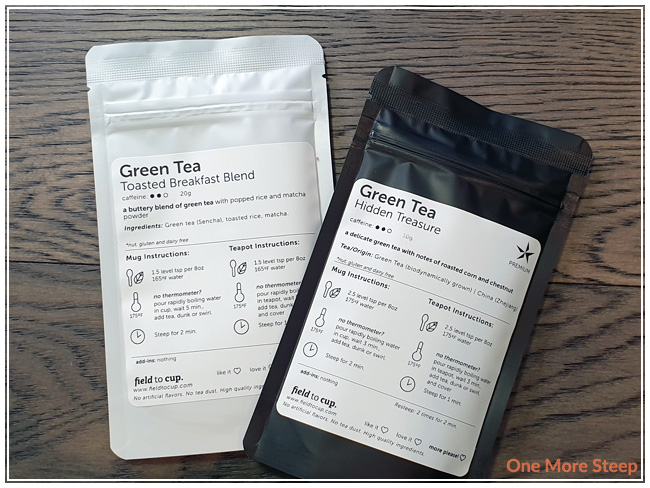 The last duo of teas I tried were Toasted Breakfast Blend and Hidden Treasure, both green teas. Toasted Breakfast Blend smells like a genmaicha – it has the popped rice/popcorn aroma that I’m familiar with, with a hint of ocean/salt water in the background. I can see the matcha powder coating the tea leaves and popped rice. This tea consists of: sencha green tea, toasted rice, and matcha. Hidden Treasures is a biodynamically grown green tea from Zhejiang, China. It has wiry dark green leaves that have an aroma that I would categorize as being a mix of nutty and sweet. I did have to look up what biodynamic agriculture means and essentially it means that it’s a type of farming practice that helps maintain the nutrients in the soil to keep the land sustainable, and is considered a type of organic farming. 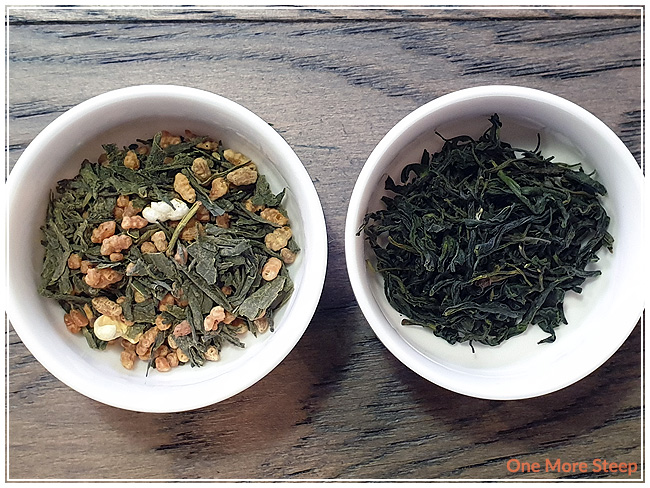 Organic Hibiscus Hint is recommended to be steeped in 195°F (91°C) water for 4 minutes. I followed the steeping recommendations for the initial steep.

Sweet Ceylon is recommended to be steep in 200°F (93°C) water for 3 minutes. I followed the steeping recommendations for the initial steep.

Toasted Breakfast Blend is recommended to be steeped in 165°F (74°C) water for 2 minutes. I heated my water up to 175°F (79°C) (lowest temperature setting on my Breville IQ Kettle), allowed the water to cool for 3 minutes and then steeped the tea for 2 minutes.

Hidden Treasure is recommended to be steeped in 175°F (79°C) water for 2 minutes. I followed the steeping recommendations for the initial steep. 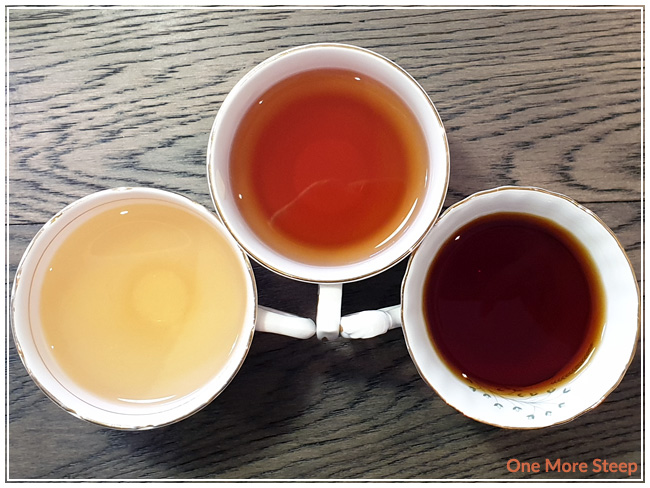 Silver Sheng 2012 steeps to a light yellow. I found that this pu’erh white tea has a lovely floral grassy and hay notes to it. It’s a smooth cup of tea. The tasting guide suggested that there were chili pepper flavours to it, but I didn’t find that to be the case. However, it is a nice smooth cup of tea and is very easy to drink.

Organic Hibiscus Hint steeps to a lovely orange colour. Surprisingly, there were no plum notes in the steeped tea, compared to the dry leaf. It has a nutty quality to it, and a hint of tartness that I attribute to the addition of the hibiscus in the blend. The hibiscus is not overpowering compared to the oolong base.

Sweet Ceylon has a dark brown colour after steeping. I found it to have a sweet aroma, with a hint of honey sweetness. The strength behind the tea is matched by the astringency from this black tea. Quite a bit of mouth puckering occurred when I drank this, as it reminded me a lot of a breakfast blend. 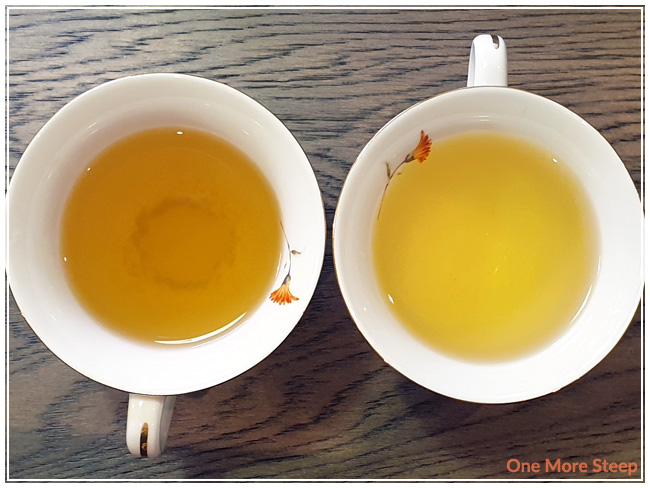 Toasted Breakfast Blend has a slightly cloudy yellow-green colour to the dry leaf. There’s a nice toasted rice flavour to it, which couples nicely with the creamy green tea base – I found it to be quite vegetal but no astringency to be noted at all.

Hidden Treasure steeps to a light golden yellow. I found it had a pleasant toasted aroma to it – the flavour is primarily vegetal, it reminds me of the flavour of raw spinach but perhaps a few notches lower in flavour compared to the vegetable.

The best resteeping tea in the box is Silver Sheng 2012. I resteeped it four times (adding an additional 30 seconds for each subsequent steep) and found that the flavour remained fairly consistent throughout, just a bit weaker with each steep. Organic Hibiscus Hint did fairly well with being resteeped – I resteeped the same leaves twice and found that the oolong became more prominent as the hibiscus fade. Sweet Ceylon did a lovely job with being resteeped (I did two resteeps of the same leaves) – the astringency was still present with each steep, but it lessened over time. 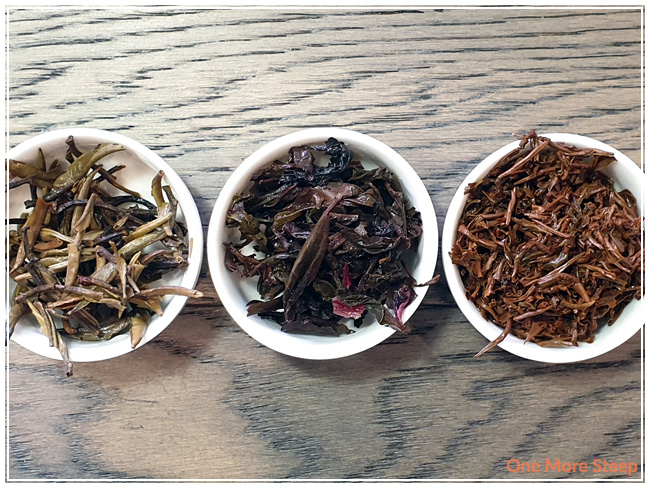 I attempted a resteep of Toasted Breakfast Blend but I found that the toasted rice flavour just wasn’t as strong as the initial steep, so this is one tea that I would recommend just one steep of. Hidden Treasure did remarkably well with two resteeps of the same leaves, I found that the flavour stayed fairly consistent throughout each steep. 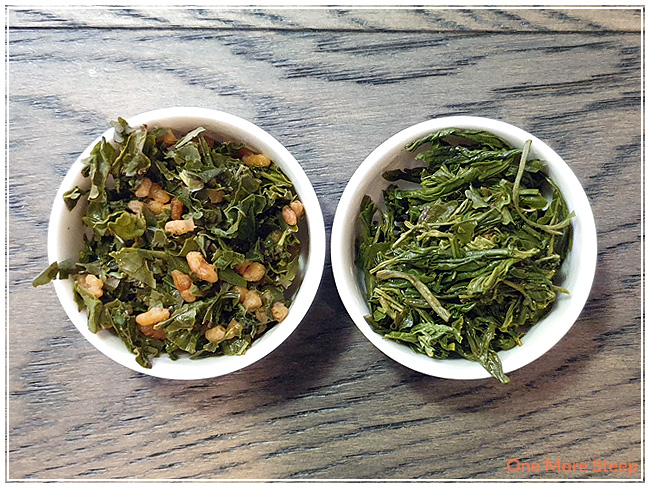 I loved Field to Cup’s May Adventurer Box. I feel like this month’s box is a fantastic combination of teas – especially for those who love the traditional teas. My favourites would have to be Silver Sheng 2012 and Toasted Breakfast Blend. I found that almost all of the teas did well with being resteeped, which just showcases the quality of the tea leaves showing up in the boxes! As always, you can opt to purchase the box as a whole or pick and choose your teas to try via the Field to Cup website (and don’t forget to use the coupon code Onemoresteep20 for 20% off your first tea purchase or first month of a box subscription!) 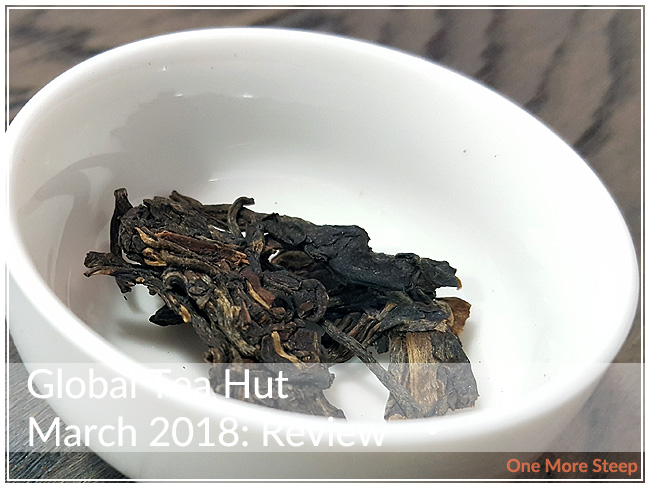 Global Tea Hut has provided me with their March 2018 issue of Tea & Tao Magazine with a sample of “Swirling Mist” for the purposes of providing an honest review.

When I was first contacted by a representative of Global Tea Hut, I wasn’t quite sure what to expect. A tea magazine? Why not! It came to me in the post from Asia, so it did take a little while to reach me in Canada. The magazine is a beautiful 60+ page magazine with full colour, glossy pages, and no advertisements. The March 2018 issue talks about several different locations where tea is grown, harvested, and processed. There’s even a full feature on the tea of the month, as well as a feature on a Tea Wayfarer, which I’ve come to learn is a regular feature on a Global Tea Hut member. 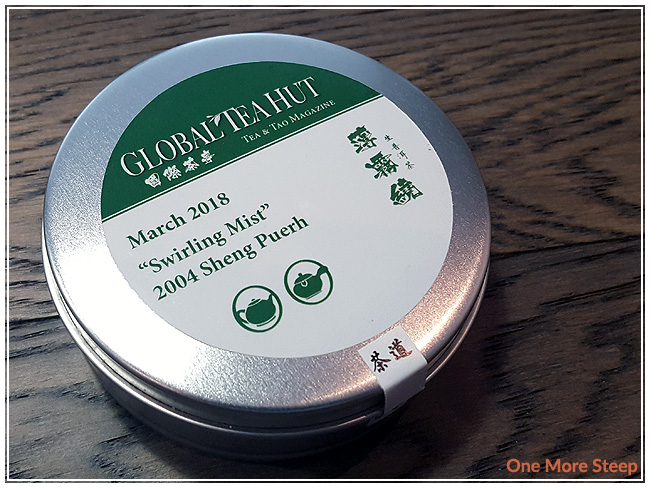 “Swirling Mist” is a 2004 Sheng Puerh, it came to me in a metal tin that’s lined with rice paper to help protect the tea. The aroma from the dry leaf is actually very mild, I found it to be a little bit earthy. There were some leaves that were heavily compacted, just from how the puerh was made into a cake. 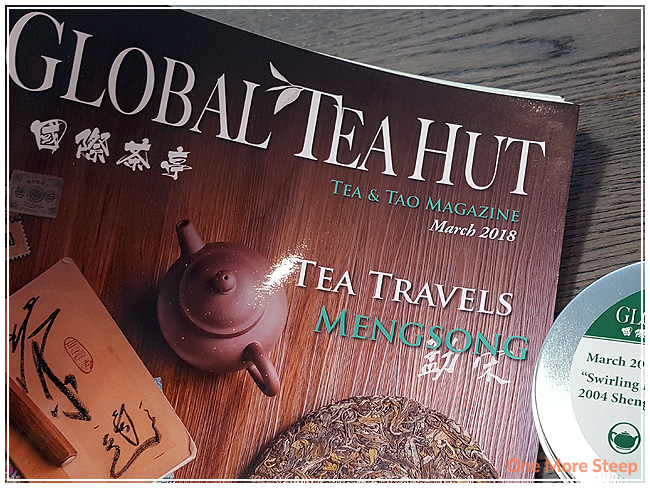 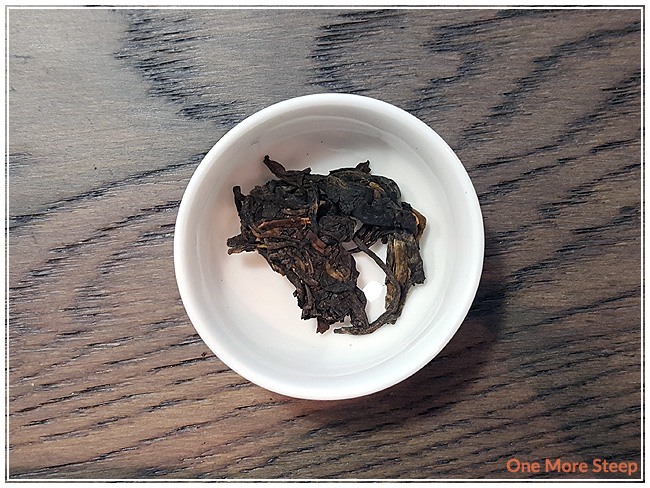 Global Tea Hut recommends steeping Swirling Mist in 98°C (208°F) water and suggested steeping it gong-fu method up to 20 times. It’s a bit of a time consuming method, consisting of very short steeps. I opted to steep in 100°C (212°F) water for an initial steep of 2 minutes.

Swirling Mist steeps to a dark gold colour. I found that it had a smooth, pleasant mouthfeel. There’s some earthiness in the flavour – something that reminds me of mushrooms, and also sweet plums. It makes for a very pleasant cup of tea, and I don’t say that very often about pu’erhs. 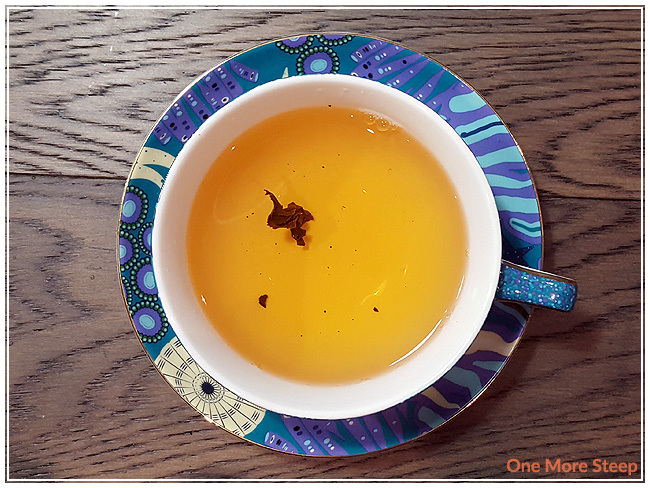 I resteeped Swirling Mist a total of eight times (nine steeps total). I found that the flavour stayed strong and consistent throughout, until about the sixth resteep – which is when the flavour started to decline a little bit. I added an extra 30 seconds for each additional steep and found that the tea stayed smooth and enjoyable throughout each steep. 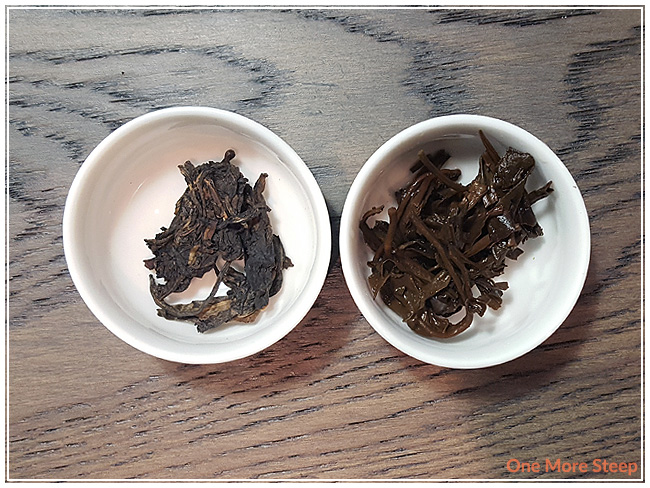 I loved Global Tea Hut’s March 2018 issue of Tea & Tao Magazine along with Swirling Mist. I really enjoyed reading the magazine, and learning more about the kind of places where tea is grown and harvested. The pu’erh was a really nice treat to have, I’ve been disappointed in the past before with pu’erh tea, so I was very pleased that I enjoyed this one. I think for the cost, you do get good value if you are interested in learning about tea farms and the process of making some of your favourite teas.