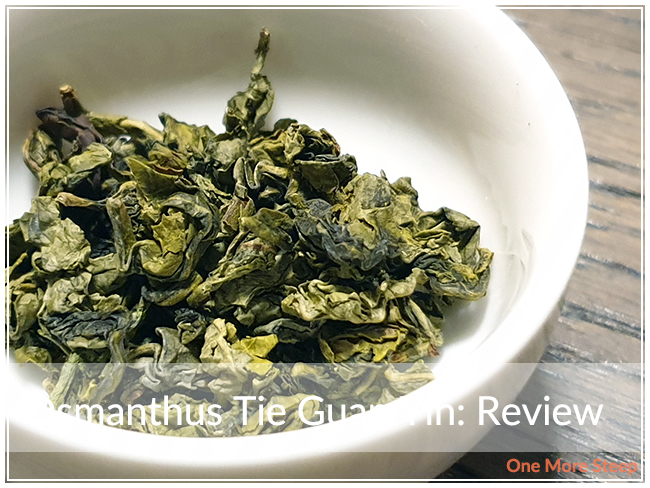 Osmanthus Tie Guan Yin is one of five teas from Teakan’s Tea Exploration Kit (Volume 2) and makes up 15g of the 70g of loose leaf tea in this curated collection.

Osmanthus Tie Guan Yin came to me as part of Volume 2 of Teakan’s Tea Exploration Kit. This is the fifth/last review I’ll be writing for Volume 2 (and I’m so looking forward to when Volume 3 is released! I’m hoping for an all-oolong kit). Osmanthus Tie Guan Yin came to me in a sealed, resealable kraft paper pouch with a simple printed label. This is a scented oolong tea from Anxi, Fujian, China. The tea itself was harvested in autumn 2019, so a bit over a year old now. 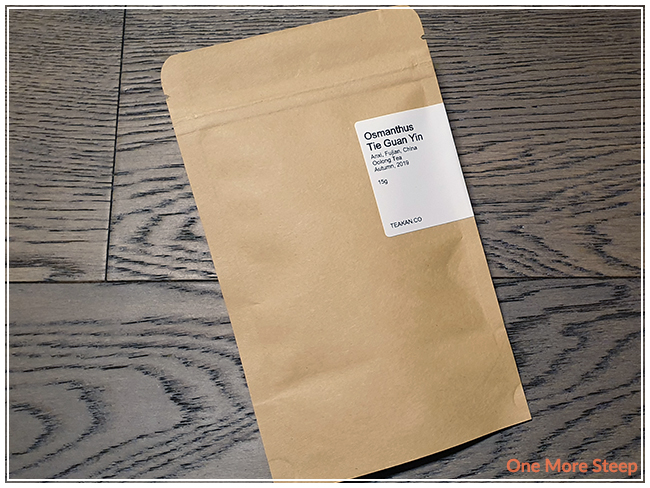 The leaves themselves are lightly bunched, with varying shades of green that are mostly light to medium in depth of colour. The aroma is strongly that of osmanthus flowers and the tea was scented in a manner similar to how they scent jasmine green teas (keeping the flowers with the tea during the production of the tea, and then the flowers are removed). It has a strong floral with a light vanilla aroma to it, it’s very inviting and reminds me a lot of spring time because of the floral notes. 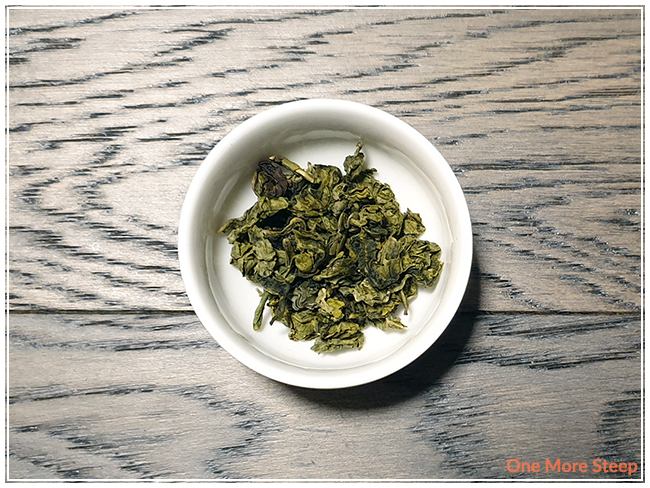 Osmanthus Tie Guan Yin steeps to a pale yellow. It has a very floral aroma with a light vanilla fragrance in the undertones. The flavour is primarily that of sweet floral, with some vanilla flavour that lingers on the tip of the tongue. There’s an almost buttery creaminess to it that kind of coats the mouth when you drink this oolong and it has a nice flavour to it. 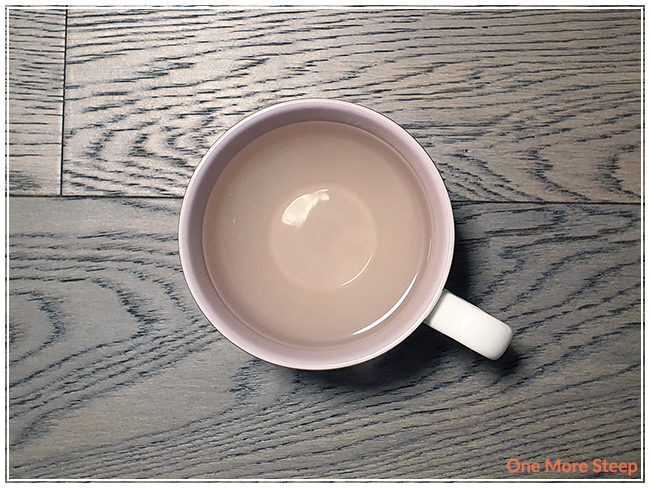 I resteeped Osmanthus Tie Guan Yin six times (seven steeps total), adding an additional 30 seconds for each subsequent steep. The floral quality of the flavour stays throughout and is fairly consistent, while the vanilla notes deepens initially and then begins to fade. The flavour stays very pleasant throughout and I would recommend resteeping this oolong as much as you care to do so. 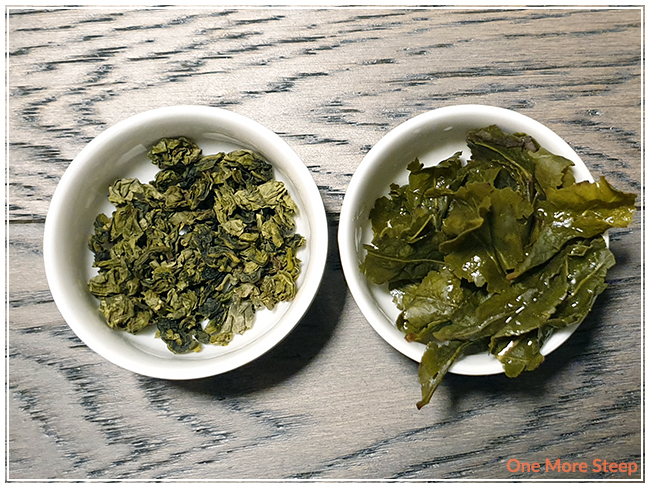 I loved Teakan’s Osmanthus Tie Guan Yin. This made for a really nice steeping experience between admiring the dry leaf, the first taste, and the multiple resteeps. It just has a nice flavour and aroma to it, and is very easy to drink and slurp down. I even allowed a cup or two to cool to room temperature and it also tasted pretty good cold, so I think it’d be a great candidate as iced tea or cold steeped. 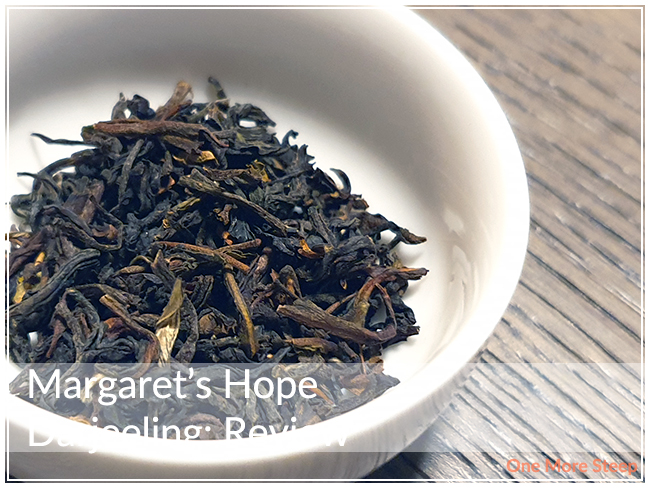 Margaret’s Hope Darjeeling is one of five teas from Teakan’s Tea Exploration Kit (Volume 2) and makes up 15g of the 70g of looseleaf tea in this curated collection.

Margaret’s Hope Darjeeling comes in a sealed, resealable kraft paper pouch. The label is the minimalistic style that I’ve come to know and love from Teakan. I have to admit, I do appreciate the not-so-flashy packaging from time to time because it really allows for the tea to shine instead of me being overly impressed by something fancy. For those curious like I was, I did look up Margaret’s Hope, and it’s a tea estate in Darjeeling. The name comes from the original owner’s daughter, who passed away after a visit on her way back to England. Margaret’s Hope Tea Estate is also the location where the labourers of the West Bengal’s tea industry first organized in 1955 to protest against low wages and unfair working conditions. 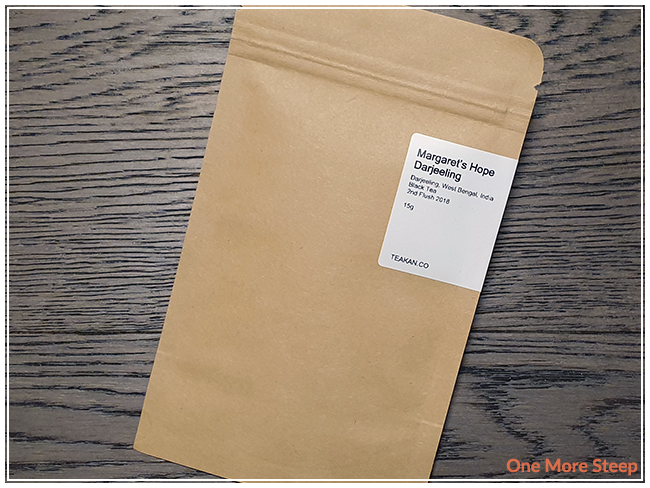 Margaret’s Hope Darjeeling has some deep, dark brown leaves with some pops of cream mixed in. This straight black tea is from Darjeeling, West Bengal, India and is the 2nd flush (second harvest) of 2018. There’s something heavy about the aroma of the dry leaf – earthy, sweet, grassy. A perplexing and intriguing blend of aromas all around. The leaves are on the shorter side, a bit wiry with a light twist. 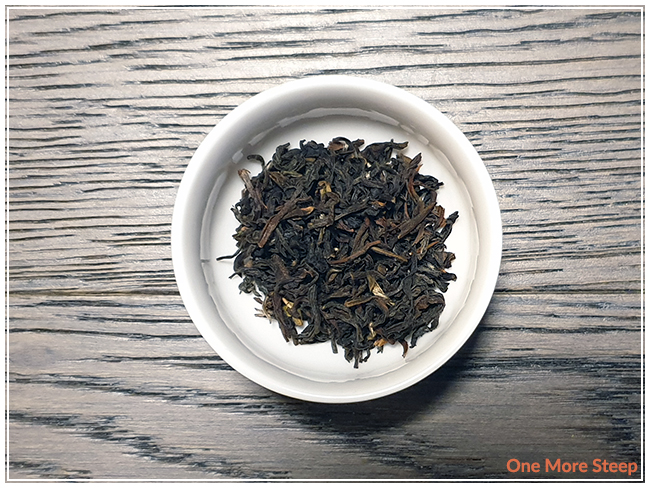 Teakan recommends steeping Margaret’s Hope Darjeeling in 85°F (185°F) for 2 to 3 minutes. I followed the steeping instructions and did an initial steep of 3 minutes.

Margaret’s Hope Darjeeling steeps to a bright golden orange. The aroma of the tea is very similar to the dry leaf – more earthy and sweet than grassy, but the grassy aroma is in the background. The texture of this tea is nice – there’s a thickened mouthfeel to the tea that just allows everything to really coat the inside of your mouth. The flavour is pleasantly sweet, with a hint of astringency that rests with the grassy notes while the earthiness is more forward and really just tickles the taste buds throughout each sip. Just a pleasant to sip cup of tea.

I didn’t add anything to Margaret’s Hope Darjeeling as I felt that the flavour really stood well by itself. I do, however, feel like this would be an excellent tea to mix with some sweetener or cream, if you were so inclined. 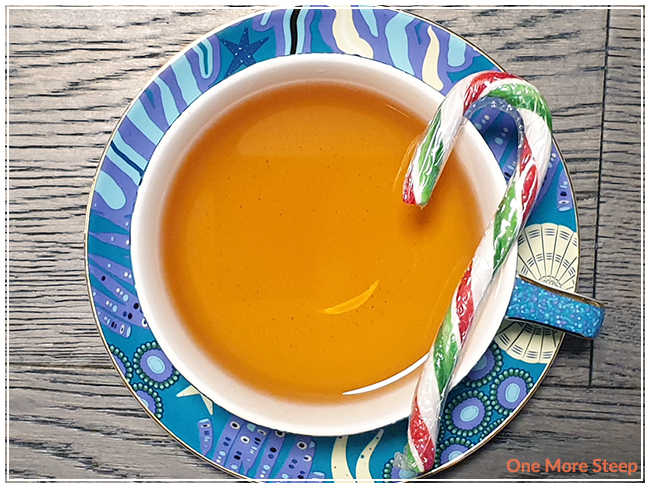 I resteeped Margaret’s Hope Darjeeling twice (three steeps total), adding an additional 30 seconds for each subsequent steep. I found that the initial steep was the most flavourful, but I didn’t have any issues with the slightly less flavour in the other two steeps. It was still very enjoyable cups of tea, so I wouldn’t hesitate to recommend resteeping this black tea. 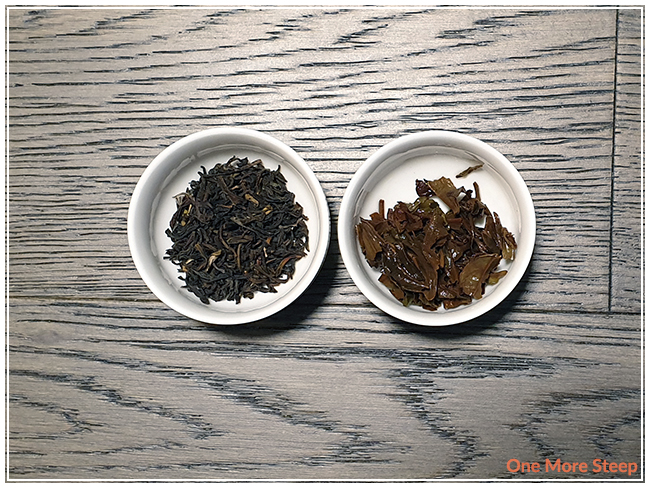 I loved Teakan’s Margaret’s Hope Darjeeling. I felt like this black tea just made for a nice cup of tea. It has a pleasant mix of flavours that were all well balanced together and did a decent job with being resteeped. It has a nice texture to it and was just easy to drink with just enough of a punch of caffeine that I could see this easily being had in the wee hours of the morning when waking up before a day shift, or anyone who needs to pull an all-nighter for school. 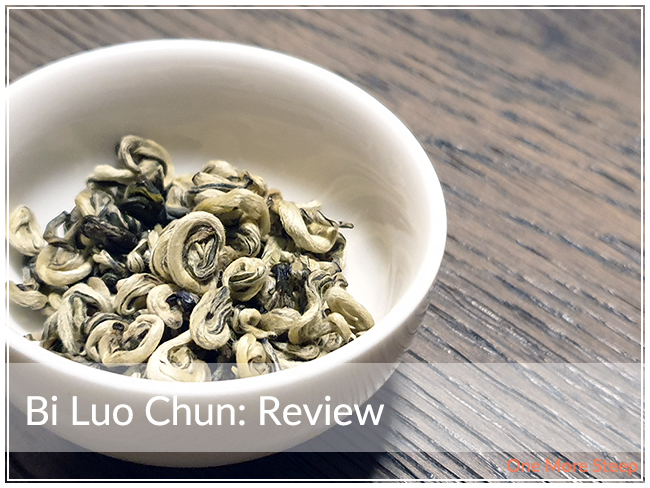 Bi Luo Chun  is one of five teas from Teakan’s Tea Exploration Kit (Volume 2) and makes up 15g of the 70g of looseleaf tea in this curated collection.

Bi Luo Chun comes in a sealed (resealable) kraft paper pouch with the standard minimalistic label from Teakan. This is one of the teas in the Volume 2 collection that I was really looking forward to trying. I’m a huge fan of traditional Chinese green teas, and Bi Luo Chun fits the bill for sure. This particular tea comes from Pu’er, Yunnan, China and was harvested spring of 2020 (something good that came from this year?). The leaves themselves are beautiful – lovely white downy bits in the spirals that go really well with it’s name (which literally translates to green spring snail). 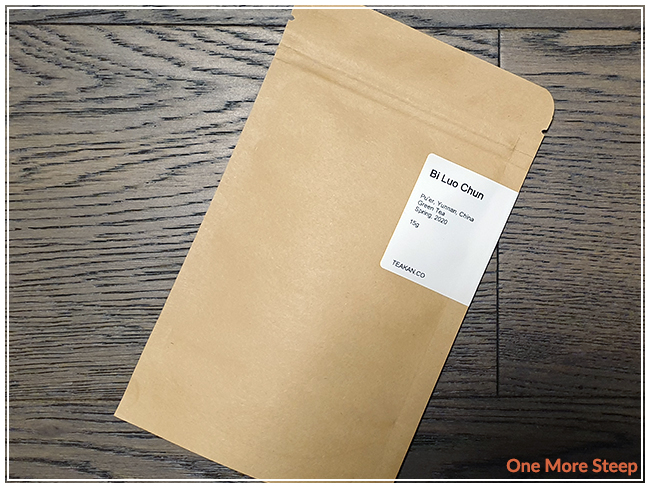 The tea leaves have a nice grassy aroma to it, very sweetly vegetal that reminds me of the smell of raw napa cabbage (which is nice and sweet when cooked – and goes very well with pork, if anyone was wondering). It’s inviting and makes me eager to try this. 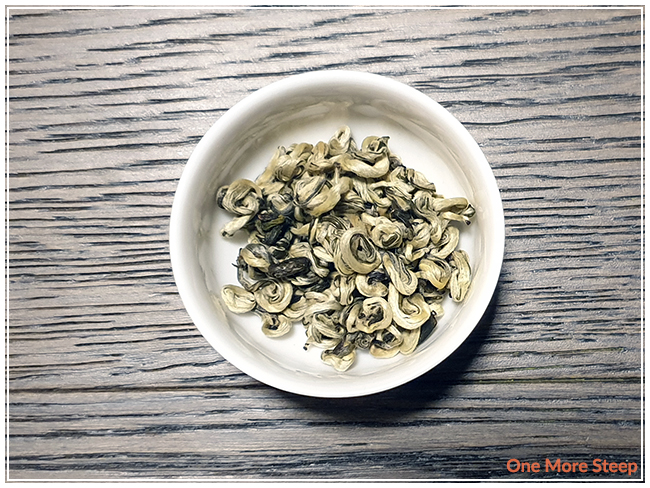 Bi Luo Chun initially steeps to a very pale yellow. There’s a nice sweetness that wafts up from it. The taste of this green tea is a touch grassy, there’s still a vegetal flavour that reminds me of napa cabbage because it has that nice sweetness. There’s zero bitterness or astringency with the 3 minute steep, and I find it to have a nice thickened texture to the tea. It’s got a great body to the tea, without feeling heavy. The grassy notes are sweet which really make it easy to drink. 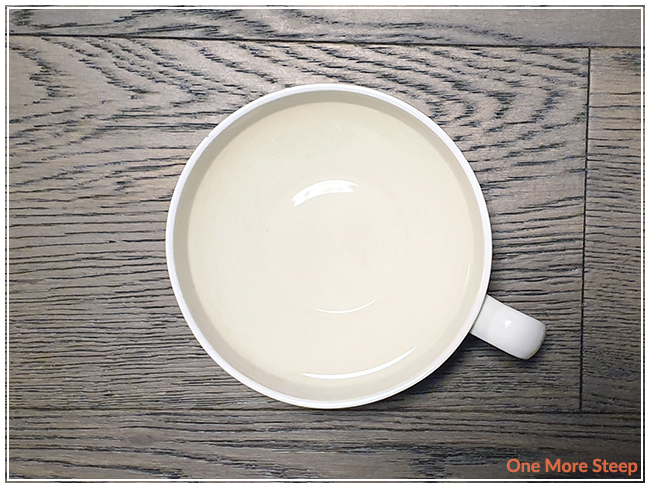 I resteeped Bi Luo Chun a total of seven times, adding an additional 30 seconds for each subsequent steep. I found the flavour to be more intense with the first and second resteep, and the tea itself was more of a golden yellow. It becomes sweeter the deeper the colour of the tea gets, which is really enjoyable. 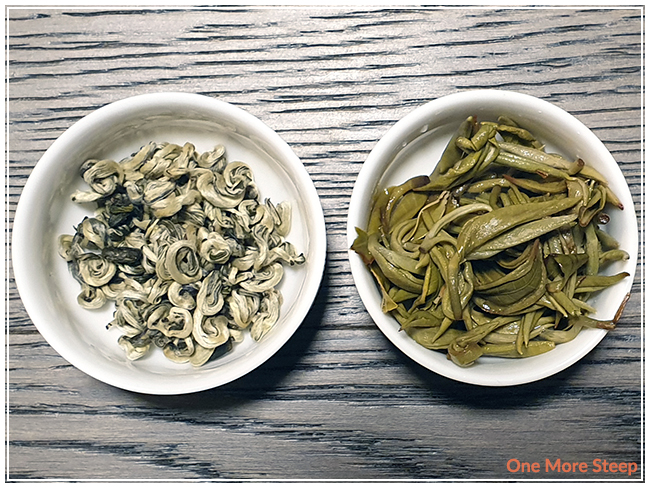 I loved Teakan’s Bi Luo Chun. I was really looking forward to trying this green tea and I was not disappointed by it at all. The experience is really a journey, and getting to watch those little ‘snails’ open and straighten up is really a nice treat! The fact that the tea itself has a good amount of sweetness to it doesn’t hurt either. I enjoyed this the most hot, although I did sip some that had been left to cool and it was pretty good too. I would highly recommend resteeping this tea because it gets better after the initial steep.

What's up, tea friends? Are you a coffee drinker?

I've been having moments lately where I've just be

Every so often, I'll come a cross a tea blend of s