Banana Breakfast Muffins by Dessert by Deb
Type of tea / Straight/Flavoured
$16.00 for 75g 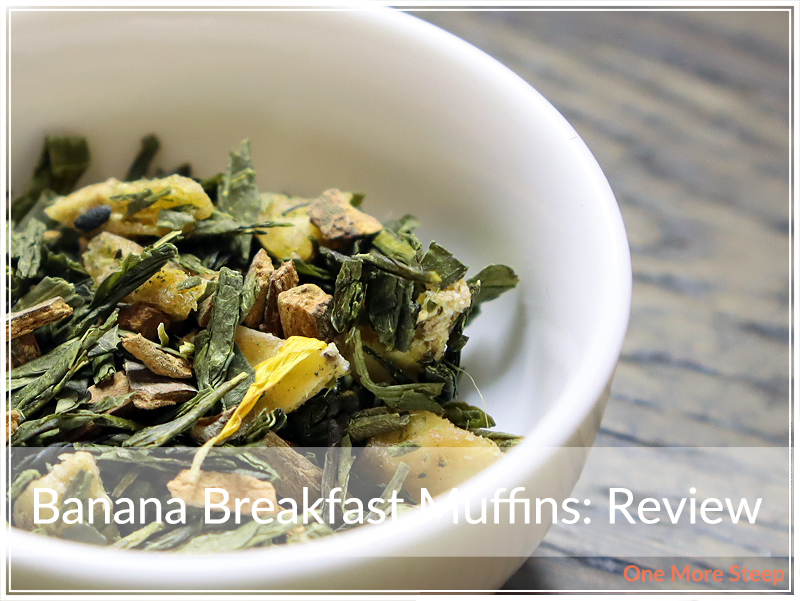 Banana Breakfast Muffins came as part of my bimonthly Subscription Box from Dessert by deb, and is a Tea Society Subscriber exclusive blend.

Banana Breakfast Muffins came to me in a sealed, resealable pouch as part of Subscription Box from Dessert by Deb. I should give a bit of a disclaimer to begin this review by saying that while I enjoy bananas as the fruit (fresh), I’m not a big fan of artificial banana flavouring or banana chips with that concentrated banana flavour or aroma. Banana Breakfast Muffins is part of the Sweet Winter Brunch Collection. 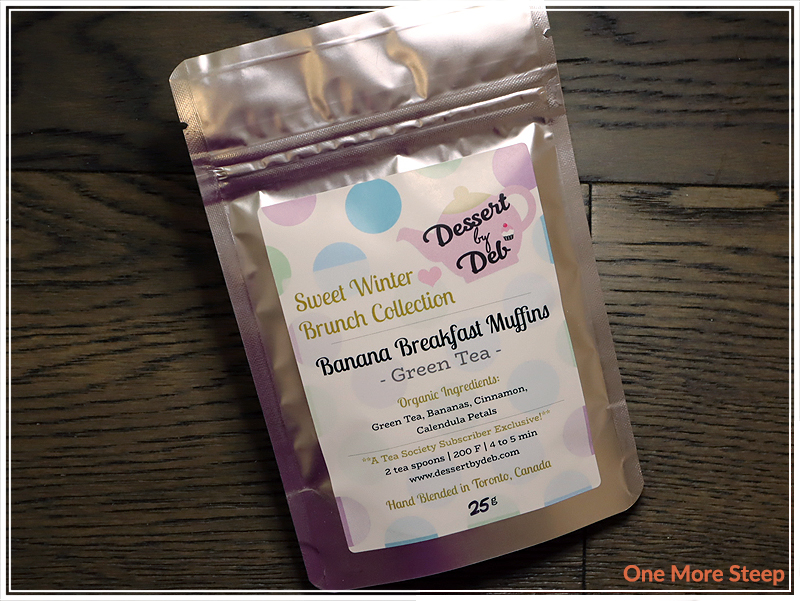 This green tea blend has a strong banana aroma with cinnamon lingering in the background – it reminds me a lot of a loaf of banana bread (just needs some chocolate chips). Banana Breakfast Muffins consists of: green tea, bananas, cinnamon, and calendula petals. 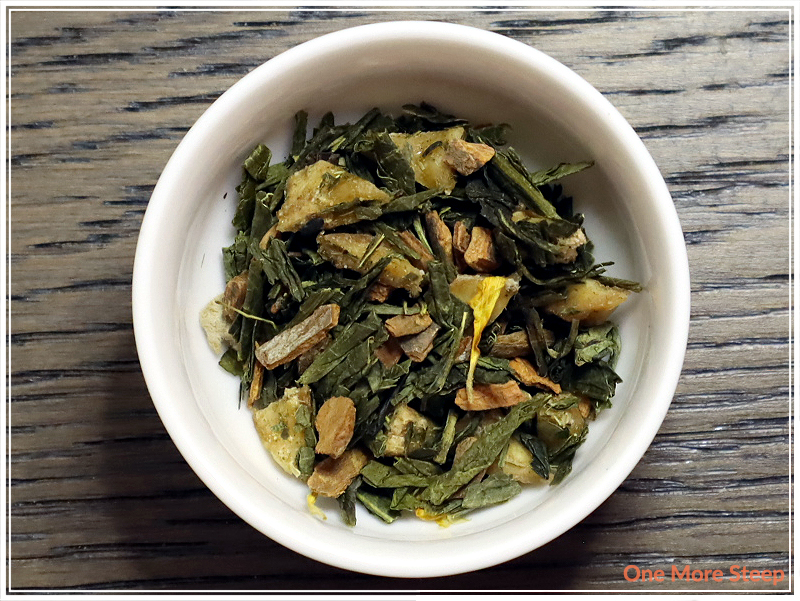 Dessert by Deb recommends steeping Banana Breakfast Muffins in 200°F (93°C) water for 4 to 5 minutes. I opted to do an initial steep for 4 minutes.

Banana Breakfast Muffins steeps to a remarkably bright yellow colour – reminds me of liquid sunshine. It has a very strong banana aroma, and the cinnamon really tickles the nose when I go to take a sniff of the tea. On first sip, I primarily taste a blend of cinnamon and banana. The taste of the banana is prominent, and the cinnamon hangs out on the tongue. The green tea flavour is more in the background, and there’s a subtle umami note to it that makes this green tea blend almost savoury in nature. 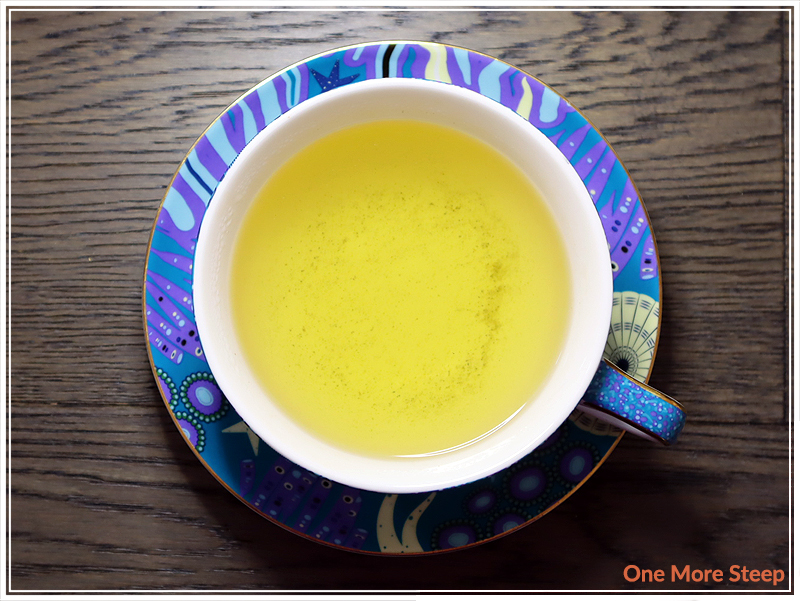 I resteeped Banana Breakfast Muffins once, but found that the flavour of banana and cinnamon doesn’t come through nearly as much as with the initial steep. 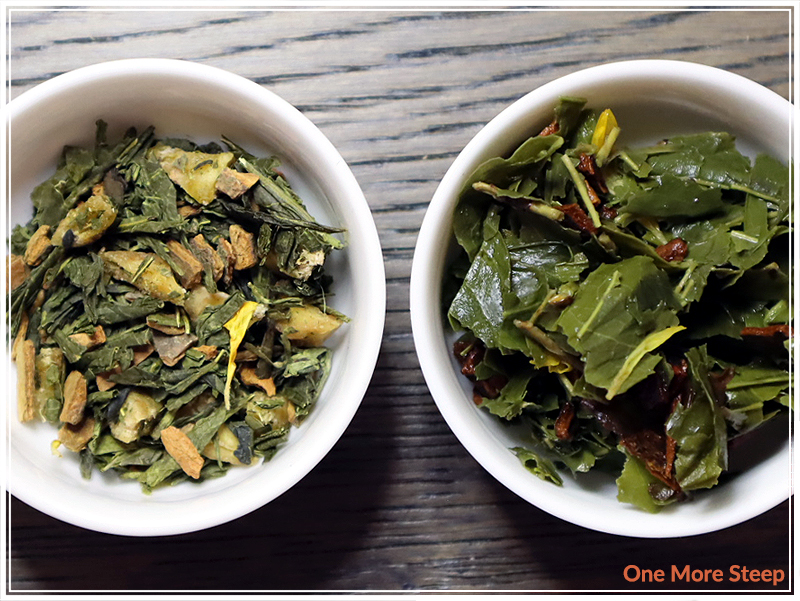 I thought that Dessert by Deb’s Banana Breakfast Muffins was just okay. While the banana and cinnamon really shines through, and reminds me a lot of banana bread – I’m just not a fan of the banana flavouring in my cup of tea.  It does well to mimic the idea of banana bread, which is a favourite for a lot of people. I think for those who enjoy banana chips and banana bread, you’d enjoy this blend. 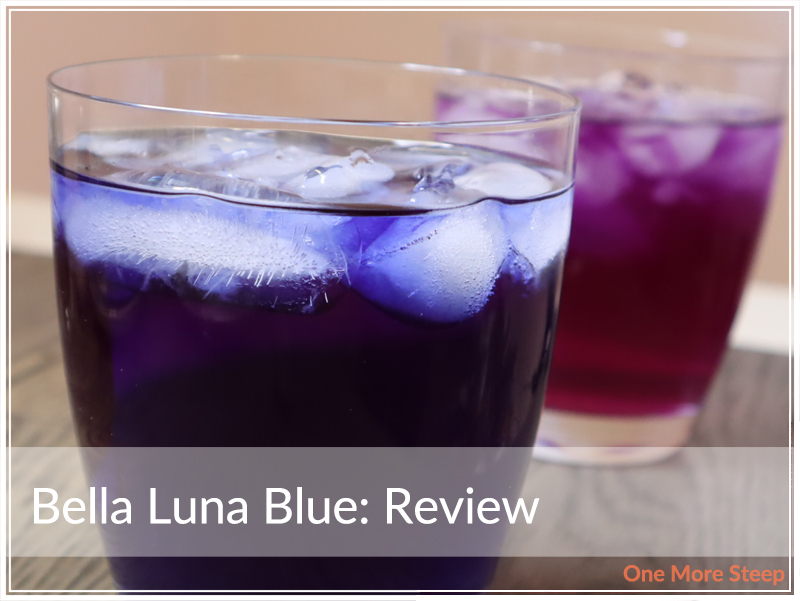 Adagio Teas has provided me with Bella Luna Blue for the purposes of writing an honest review.

Bella Luna Blue is a bit of a special blend. Described by Adagio Teas as being an elusive blend, this is an herbal infusion that Adagio Teas only makes available on the day of a blue moon, meaning it’s an extra full moon that occurs. Bella Luna Blue is a blend of lemongrass, butterfly pea flowers, and natural flavouring. The packaging is a sealed, resealable printed pouch with some information regarding the tea on the back – including preparation details and ingredients. 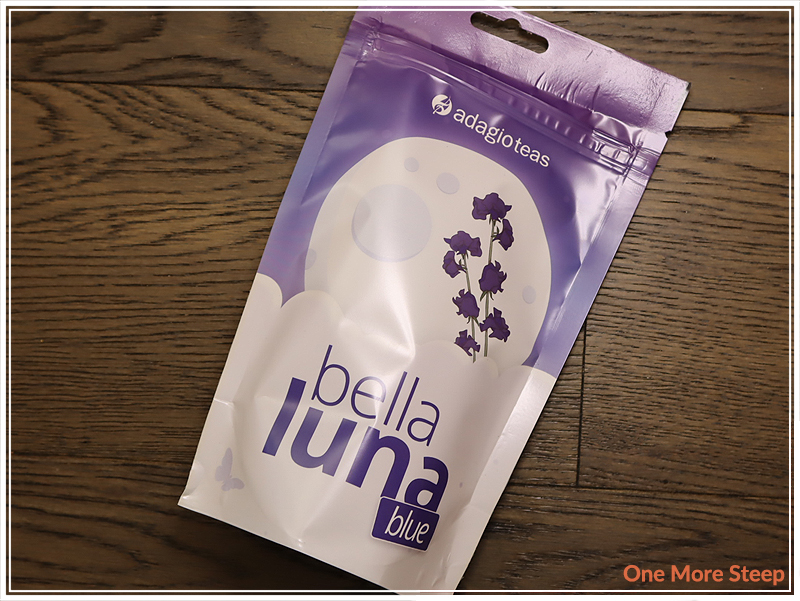 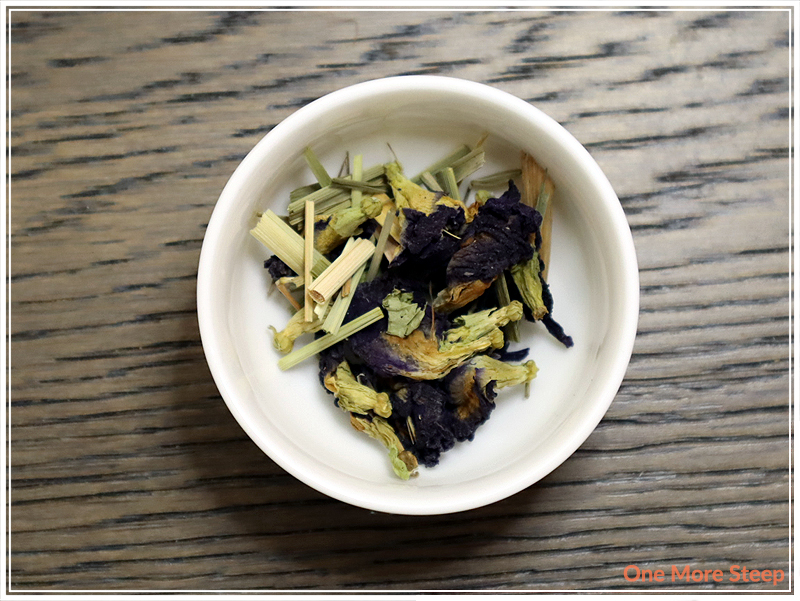 Adagio Teas recommends steeping Bella Luna Blue in 100°C (212°F) water for 5 to 10 minutes. I did an initial steep at the recommended water temperature for 7 minutes.

Bella Luna Blue steeps to a gorgeous deep indigo colour. It’s quite pretty and just has a magical appearance to it. The aroma and flavour of the steeped tisane is lemongrass. There’s a very subtle fruity note to it, which I think comes from the natural flavouring. I did have this iced, as I was taking notes from some of the videos Adagio Teas posted on their social media about this blend – and the day that I steeped this wasn’t the warmest day (so iced it was!). The fruity undertones are pleasant, and the lemongrass flavour is throughout. 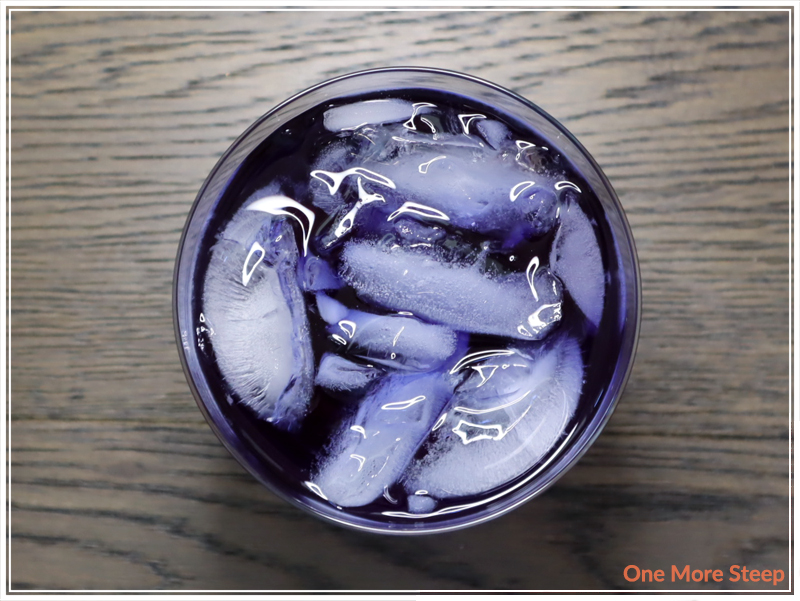 Adagio Teas did recommend adding some lemon juice – so I did squeeze a wedge of lemon over my cup. The addition of an acid to butterfly pea flower does do a bit of a magic trick – and the glass of iced tea went to a magenta colour. Very fun, and I think the addition of lemon juice (you could probably try lemonade if you want something sweeter), added a bit of brightness to the tisane and allowed for those fruity undertones to be a bit more developed. 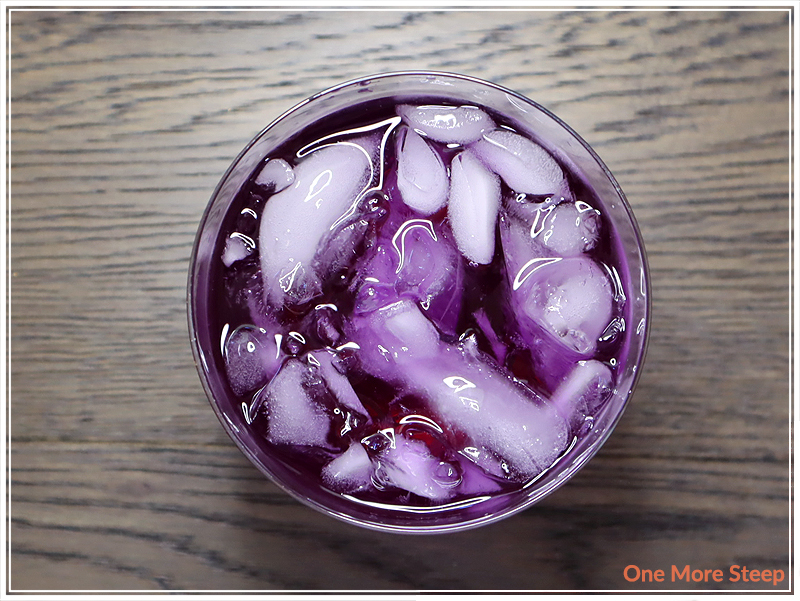 As Bella Luna Blue is an herbal tisane, I opted to do just the one steep. 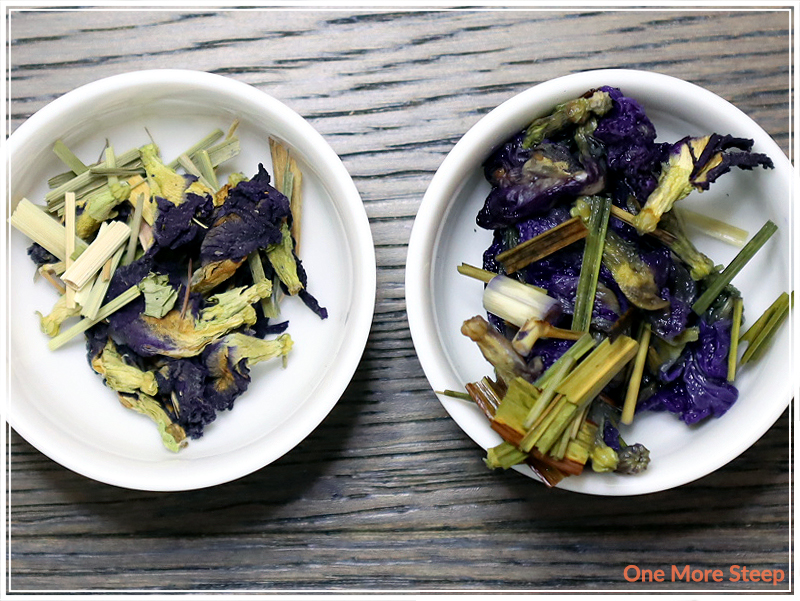 I loved Adagio Teas’ Bella Luna Blue. I think the blend is really fun – it’s definitely a bit of a novelty to have a colour changing tisane on hand! I could see this being a big hit with kids and kids at heart. The flavour of Bella Luna Blue is primarily lemongrass, so you really do need to like lemongrass to enjoy this. I really liked it iced, and found the flavour to be better with the addition of lemon than without – so I guess I’m trying to say that I like Bella Luna Blue better as a magenta drink than a blue one. 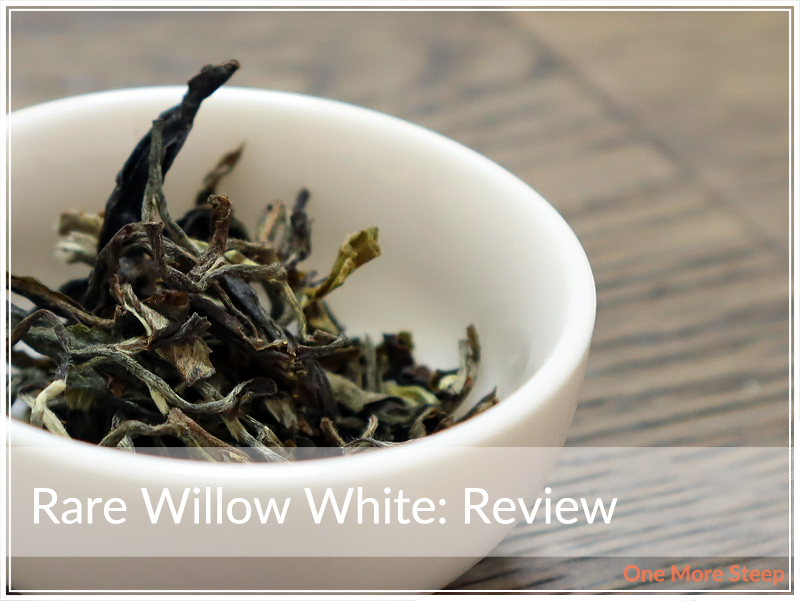 Rare Willow White comes in a sealed, resealable kraft paper pouch with a very familiar label. Unsurprisingly, Rare Willow White is a white tea. This particular one comes from Maipokhari, Ilam, Nepal. Fun fact, the tea industry began in that region back in 1863 and Nepal is responsible for producing 16.23 million kilograms of tea every year – with the majority being grown in Ilam. Rare Willow White is a 2nd flush tea harvested in 2020. 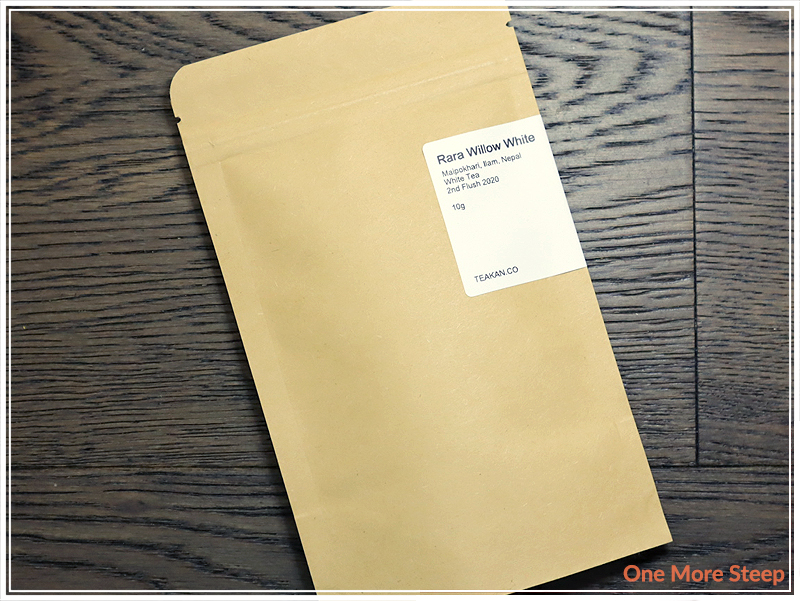 The leaves are long, wiry, with a great mix of colorus from cream, spring green, olive, brown, and a deep brown that’s almost black. There’s a great range in colours here, which makes it a such joy to look at. There’s a light floral sweetness to it, which makes it kind of enticing. 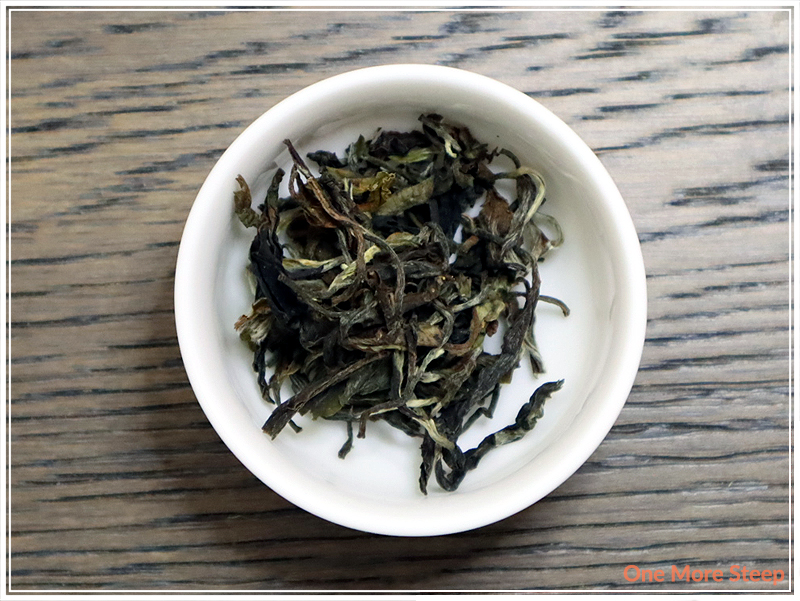 I opted to go the western style as it’s easier for me to pour and steep for 1 minute versus 15 seconds.

Rare Willow White steeps to a light yellow. The aroma is lightly floral. This white tea steeps smooth – it has a nice mouthfeel to it with zero astringency or bitterness when steeped for 1 minute. The flavour is floral, with a hint of fruitiness and just a touch of sweetness. Nothing too overwhelming, but it helps accent the floral notes. It has a bit of a crispness to it, and it’s just a very easy tea to drink. 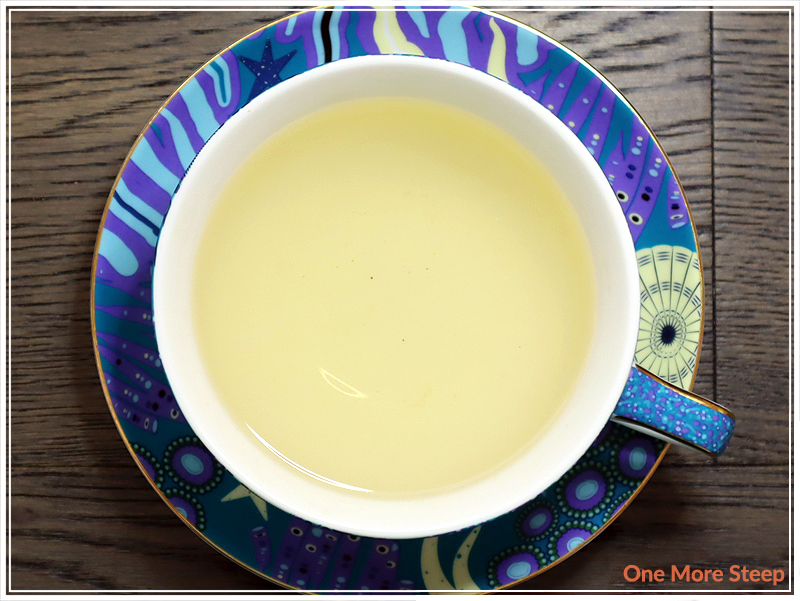 I resteeped Rare Willow White six times (seven steeps total with the same leaves). The tea itself became a darker golden yellow as I went, and the floral notes got stronger, with a heavier fruity undertone as I steeped. It was still very easy to drink, and I liked tasting the very subtle differences between each steep. I found that the flavour began to wane by the third resteep (fourth steep total), but it was still palatable by the sixth resteep. 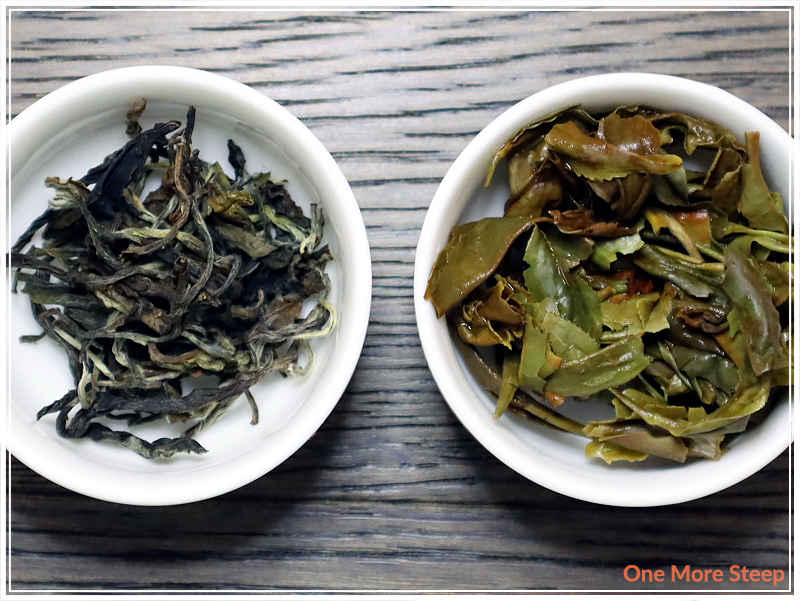 I loved Teakan’s Rare Willow White. Honestly, what a treat to try a white tea from Nepal – especially one that just resteeps so well and has a great flavour to it. I love the light sweetness that mingles well with the floral and fruity notes. Rare Willow White certainly has a great flavour, aroma, and the leaves are pretty to look at as well. I definitely enjoyed this one hot, but also had a cup of it cooled down with ice and it does well as an iced tea as well.